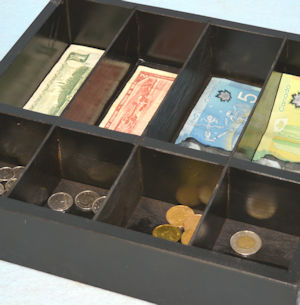 Working with cash and making change, especially for people who don't work with cast daily, it can be a stressful time ... making sure you give the correct change and not keeping people waiting. One of the things that can be be done is just making your cash more accessible and easier to see and count, just the same way retail clerks give change from their cash registers ... with a cash tray.
These are easy to make, but they do take a bit of time because there are a number of components, and you don't want to make they too big. The best way to start off is to determine how many slots for cash bills you want, and what the size of your money is. The size of your money and how many bays you want will determine the size of your tray and keeping in mind you may also want some change bins in case you are dealing with coinage.

Watch this and other similar videos on YouTube - https://youtu.be/2eUhWhZWg8g

I mad mine 2-3/4 inches high and that was plenty, I think 2 inches would be a better height if I ever had to do it again. I decided on 4 bays for paper money which also meant 4 bins for coins as these were used for the spacing with of the box.

I don't think there is wooden article that is more diversified than doors. There are thousands upon thousands of different doors in all shapes and sizes, with and without window, highly decorative and exotic to plain and funtional. For this project I am building a door for my outdoor storage and garden shed. I built the shed a couple of years ago and the only door I had that fit at the time was interior door which is not really suitable for putting a good solid lock on, so the goal here is to make a sturdy, functional door that also happens to look nice that can be used to replace that interior door.
For the wood, I will be using a reclaimed Douglas Fir beam about 10 feet look that should contain enough wood to make the entire door if I cut it properly. The beam has been planed flat on one side but otherwise is rough. Three of the sides have also been stained. I do not want to run any of the stained sides through my jointer or planer if I can avoid it. Almost all stains contain some form of dirt that is used for the coloring of the stain and this dirt can be very hard on blades and contribute quickly to their dulling.

Watch this and other similar videos on YouTube - https://youtu.be/Y9sLByuKXrU

The first order of business is to cut the beam to a rough length to make it manageable to handle. The door size is 76 inches by 28 inches so with that in mind I began by cutting the beam to lenght, then in order to cut some widths, it needed to be run through the joint to make at least one edge flat and straight ...

The days of Timber Frame Construction are being kept alive and well by members of the Timber Framers Guild, a world wide organization dedicated to keeping this form of woodworking combined with carpentry, alive and active. And thankfully someone does because without some of these massive and impressive hand build structures like houses, barns, bridges and lodges, we would see this art from fade away.
One of the more more recent and certainly impressive project this group engaged in was building the impressive Foot Bridge over the Kicking Horse River in Golden British Columbia, Canada. The Kicking Horse River was so named because in 1858, Sir James Hector, who was exploring the area, was kicked in the chest by his horse while in the vicinity of the river, and so came the name, Kicking Horse River.
Although the bridge was completed in 2001, it was 5 years in the planning and the raising of funds to build it.The townspeople of Golden worked hard and making this bridge become a reality by ensuring the skilled workers would be on hand, along with a team of apprentice Timber Framers who go on-the-job training, and all of whom needed living quarters and meals provided because most of the workers on this bridge did so with out pay, and many even paid their own way from all corners of the world, just to get to Golden and the opportunity to work on this timber frame bridge.

Towards the end of summer in 2001 the bridge was nearing completion. This was also the time of the tragic events unfolding in New York City on September 11, 2001 and what come be be known as "911".  Despite this world changing event, the townspeople and Timber Framers worked hard into the fall to finalize the competion and placement of the bridge. Having been build on the banks of the Kicking Horse River, a glacier fed river, upon completion the entire bridge needed to be hoisted and positioned across the river.

This was done using 2 enormous cranes and the process lasted 4 heart-stopping days. After the bridge was placed the final component, the roof was added and thus was the completion of the Kicking Horse Foot Bridge.
anyone who has any love of woodworking, carpentry and timber framing will be in awe of this bridge as it sits over the the turquoise river ... and during the right seasons, you can watch the boat loads of rubber rafters who come to challenge these white water rapids, making one of the most picturesque and awe inspiring locations you will ever get to visit.

I love learning new things about woodworking, and it seems that every day I learn something new. I especially love it when I find people who are doing things that are outside of what we normally expect, and wooden sign making is one of those areas.These are the kinds of people I like to highlight because they work hard and give freely of their information and knowledge.

For years I have assumed that really the only way to carve signs of any quality was to use a CNC machine, connected to a computer running special software, that can take quite a while to learn how to use. Some time ago I was shown that, with a little bit of practice, some fairly common tools and little bit of instruction, it is possible to makes some outstanding wooden signs.
Eric and Dave Rhoten, the father and son team, have spent many successful decades in the wooden sign making industry and are now showing how everyone how they can make their own wooden signs on their website davesigns.com and their YouTube Channel oldave100.

It seems like they have made about every kind of wooden sign that anyone has dreamed up because between them they have an enormous wealth of information. They are frequently releasing new videos that answer viewers questions on sign making and give tips, ideas and suggestions on the best way to make wooden signs. (and scroll down for direct links to their 2 videos on making the woodworkweb sign) ...