Table Saw Push Sticks: What to Keep What Pitch

Safety with power tools is boring but vital topic and there's not a lot that can make it interesting. I have always been paranoid about loosing digits or parts of digits and to date - after 50 years of woodworking I still have all of them intact, and I intend to keep it that way.
RULE #1 - STOP, LOOK and PLAN. I never attempt any cuts with the table saw that I even think will land me in trouble. If I have any hesitation about making a cut, I look for an alternative method or a safer way of doing things.

In the past generation when power tools started to become popular, the pioneers in power tool woodworking lost fingers and parts of fingers because they were not aware of safety procedures and in many cases there were not the safety shields on machinery that there are now. They taught us that safety IS important.

Part of the problem today, is that many manufacturers that produce inexpensive table saws are, in many cases, unable to manufacture things like blade guards, slitters, riving knives that are truly safe. And what I mean by that, is once you get some of this equipment home and set put it all together, the problem is that some of the safety equipment is so crappy that you need to take it OFF the machine to make the machine safer, because wood is getting caught in and under there supposed safety features and in fact are making the machinery less safe.

One of the challenges that novice woodworkers soon discover it that working with wood means you need to understand it's properties, and one of the most rudimentary properties is the moisture content of wood.

Wood has the unique ability to absorb and release moisture. This is due to the cellular makeup of all types of wood, although different species of wood will absorb and release moisture at different rates. It is the coming and going of moisture that accounts for wood movement. If you were to grasp a handful of drinking straws in your hand, this is very similar to the structure wood. It is comprised of long microscopic tubes all bound together. It is these  microscopic tubes that exchange nutrients up and down the tree as it is growing, and primarily moisture is gathered from the roots and distributed through the growth rings of the tree and on up into the leaves.

When a living tree is cut down, no matter what time of the year, there is always large moisture content in the tree, and a much higher one in the spring and summer. Depending on how the tree is milled, and how the wood is dried will also affect, to a degree, how that wood absorbs and releases moisture.

Half the fun of making doors is deciding what kind of panel to use with them, and the list is endless. Once you have conquered making door frames or more specifically, cabinet door frames making the panels to go in them is often far less challenging. In our video we show how to make raised panels but this is only one of many possibilities. I have seen fabric panels, mirror panels, clear glass panels, stained glass panels and many varieties of simply plain panels of different specialty woods.

Making raised panels appeals to a large number of people because they are one of the "traditional" panels that are used in furniture and cabinet making, particularly kitchen cabinets. By mixing and matching wood some very striking alternatives are possible.

Making raised panels on a router is not difficult but there are some basic rules and techniques to follow. First and most importantly be sure to invest in a good quality panel cutting bit. Of course it will need to be carbide tipped but should also have the blade at a shear angle to make a better cut of the wood and to save wear and tear on your router. Freud bits are an excellent selection for raised panel bits.

Once you have decided on the type of wood you are going to use for the raised panels you will need to know 2 things, 1) what is the moisture content of the wood? and 2) what is the "wood movement" or wood expansion going to be for the wood and the environment that the cabinet will be in.

But band saws have one inherent problem, and that problem is that most of them will tend to "drift" when they are cutting through wood. What this means is that if you are ripping a piece of wood, and following a marked line, there is a very good chance your band saw will develop a mind of it's own and start cutting off that line. This drift is caused by a variety of elements like the grain of the wood, they type band saw blade you are using (and how sharp it is), the tension on the blade and even whether or not the blade is running true on the 2 band saw wheels. It is often possible to reduce drift but in most cases you have to learn which way your band saw will drift and take that into account when you are cutting wood.

Another inherent feature of all band saws, particularly when they are ripping wood, is that at the beginning of the cut the saw will cut quickly but as it is cutting through the wood the speed at which the wood is cut is noticeably slowed.  Again this is typical of almost every band saw, small or large, so if you find this happening with your saw ... it is not "your saw" it is all saws that have this quirk.

Setting up a band saw is an important step in order to get the best cuts and help preserve the life of your blades and your saw. It is important that power to the saw be turned off before any setup is attempted. The first step is to set the BLADE TENSION, which, on most 2 wheel band saws is done by RAISING the top wheel with the appropriate adjustment knob or wheel on your band saw .... 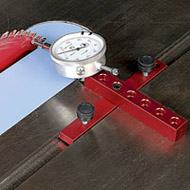 The table saw is one of the most important tools in your workshop but in order for it to run smoothly and efficiently, some follow-up maintenance is required. The steps below instruct and detail how to keep your table saw cutting smoothly and safely.

When is a table saw tune up required?

Your table saw will normally provide some helpful indications guiding you on just what adjustments need to be made, and how soon. If the blade cuts straight but at the very end, breaks off more stock than required, this will be accompanied by a ringing sound (as it straightens after deflection). Another sign: if the saw blade is not perfectly parallel to the fence, there will be burn marks on the wood. However, with this last sign you need to be careful since cutting too slowly will also cause burning.