Part 1 - Buildling the Base (the WorkbenchTop is further down this page)
I.m sure there is nothing more personal to a woodworker than their own workbench. I have never seen 2 the same unless they were purchased from a pre-manufactured company, and I have only ever seen a few of those. Everyone has their own special requirements and I am no different. The workbench I have been using was built as a "temporary workbench" over 20 years ago, so it's time to build my dream workbench.

When I scoured the Internet looking at workbenches, I was trying to find workbenches made from plywood and there are very few of them. I had an idea for using plywood that I could make a workbench that was very strong yet much lighter than usual and still offer all the advantages of much heavier workbenches ... but mine would have wheels and be easy to move around the workshop. 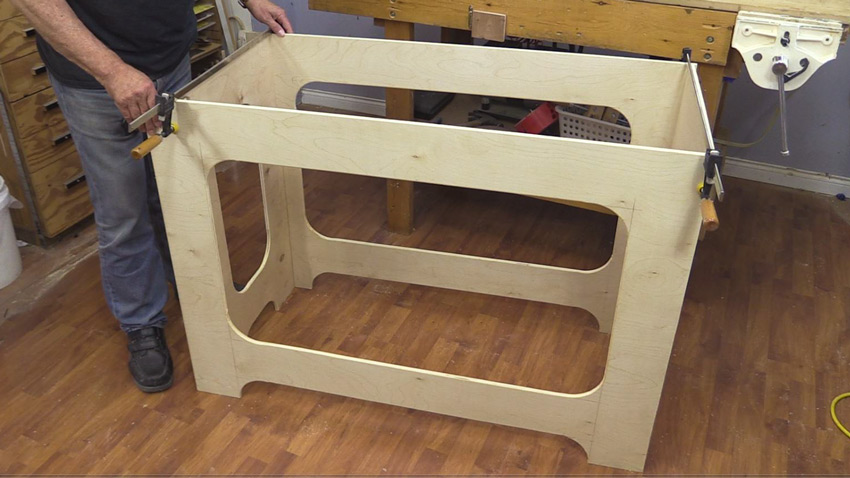 I started off making a model of the workbench which you can see in this video.

I really liked the design and I was convinced it would be a strong workbench, and have all the features I wanted, but until you actually build something you never really know.

My first stop was at the lumber store where I purchase 2 - 4 x 8-foot sheets of good quality plywood.

For me, I knew the size of the workbench top I wanted, so the base fell out from that. The top wanted to be 23-3/4 inches (just under 2 feet) by 60 inches (5 feet) long. the reason for this is that I like to "refresh" the tops of my workbenches every few years so this way I could get 2 workbench tops from a single sheet of 3/4 inch MDF,,, but that will come later.

I also purchased some wheels and some feet for the workbench so needed to take these into account when calculating the height. 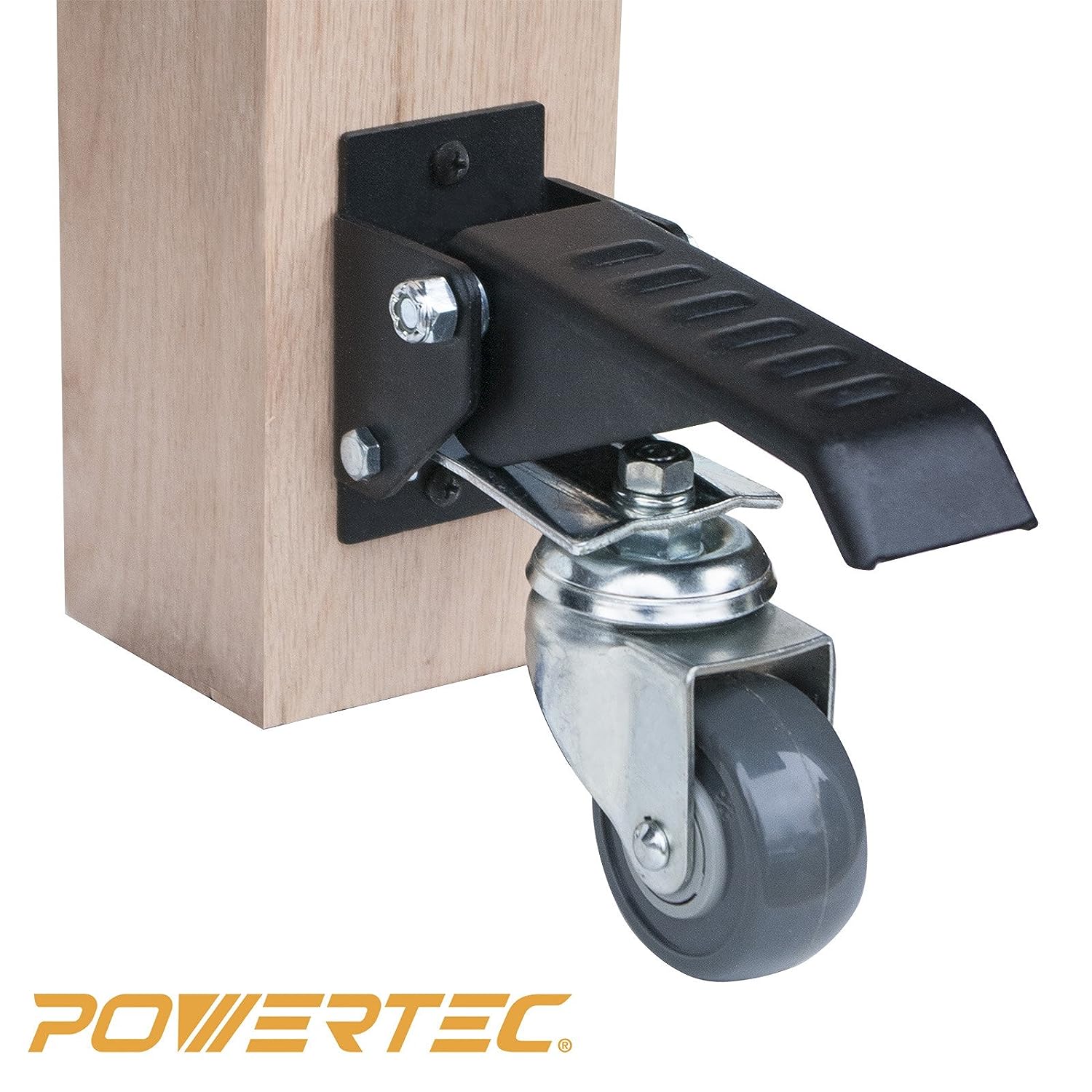 These were the wheels I purchased, you can check them out at Amazon, they are very strong, but if you lift the wheels, they flop under their carriage, so I had made a stop for that, and also the when you flip the wheels up, the lever often flips up to high so I needed to make another stop for that ... just be aware these wheels are good, not perfect. 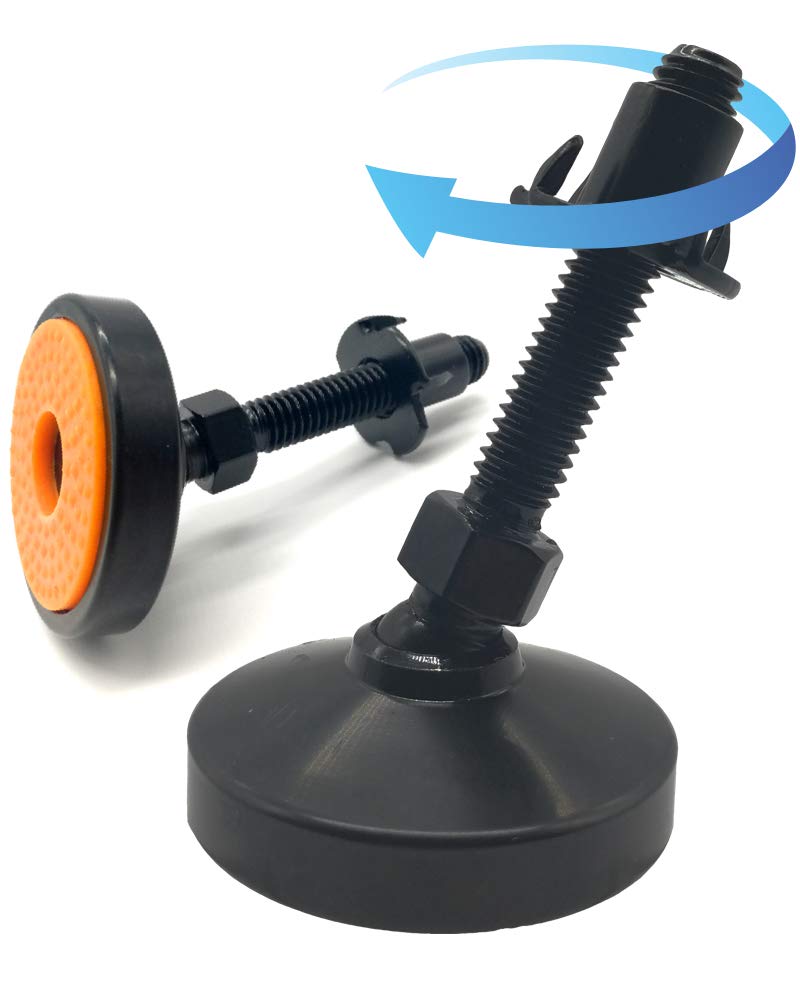 These are the adjustable feet I purchased, you can check them out at Amazon. They seem to be very good and even "grip" my floor nicely but I am only starting my journey in using them.

When adding the thickness of the top I was using and the feet for the base of the workbench, it turned out the actual height of the plywood for my workbench was 33 inches. This made the front and back of the workbench 46" wide x 33" high and the sides are 19-1/2" wide and 33" high.

As you can see in the video I cut out the insides of the plywood on my workbench to make it lighter in weight. After the cutaway is done I ended up with 5" wide legs on the fronts and the sides. You may also note that I have steel 9" vice at one end. This end of the workbench base does not have any cutaways on the base. This is because I may add some shelves or even a small cupboard at a later date as there is a whole area underneath the vice that is blank and could be used for further storage, but all that is for another day.

I opted to use a 6" diameter for cutting the inside pieces of the workbench. this gave me a slightly large radius and thus a bit more strength. These radius cuts could be made with a jigsaw, I used the router and a template to get a cleaner cut. After all the sides and fronts were cut out, I took a small round-over bit to all the inside edges of the workbench to give a smoother edge to them. 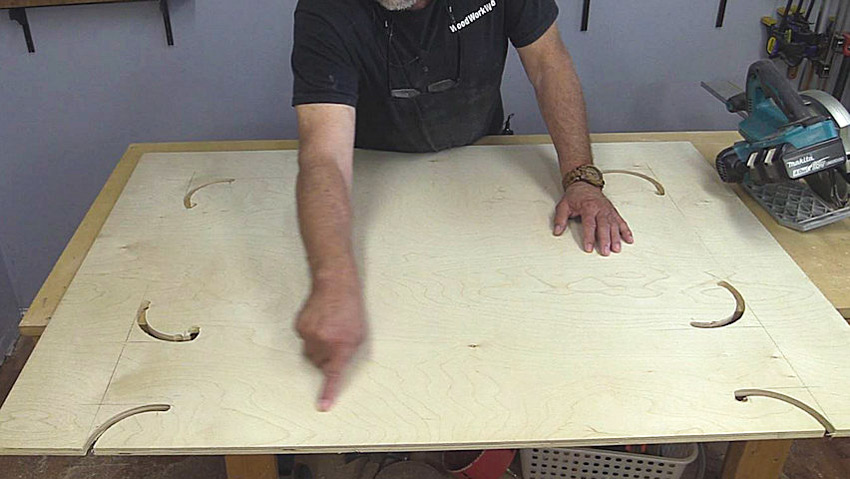 Assembly of the base came next. I used 1-1/4" oak pieces and fastened them with glue and screws to the end pieces of the base. The sides of the base would be attached with Kreg Screws only (also know as washer-head screws because of their large head).  These oak uprights would also be drilled to accept the T-Nuts for the adjustable feet. 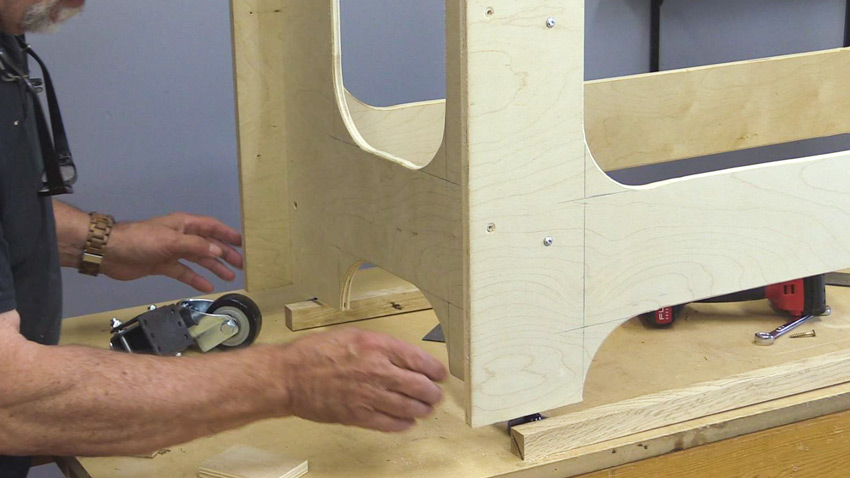 This bench can be easily disassembled by removing only the washer-head screws, all other flat hears screws remain in place as they are secondary security for the glued on pieces of the bench.

The assembly went well, and even installing the lower shelf which made the workbench square and even more sturdy and yes the lower shelf also used a few washer-head screws to attach it to the shelf brackets that were glued and screwed into place.

Next came installing the wheels. This turned out to be a bit more of a challenge. The wheels that attached under where the vice would be easy, the challenge was how and where to attach the wheels on the opposite side. My original intent was to place the wheels sideways on the inside of the front and back frame but when I checked them the wheels did not spin freely but bumped up against the frame. After some thought and a few other tries, I finally determined that the best location for the wheels was to put them at an angle wide enough that the wheels wouldn't bump but narrow enough that I still wouldn't accidentally kick them when walking past the end of the workbench.

With very little effort, I could a 30-degree angle on the table saw, then trimmed it to fit the template I made, cut the board in half one for each side, then glued and screwed it to the base side, then attached the wheels. It seemed so easy when it was done, but I did go through some contractions trying to figure out how to do attach them.

One the wheel sere attached, the base was substantially complete .. all it needed now was a top  ... 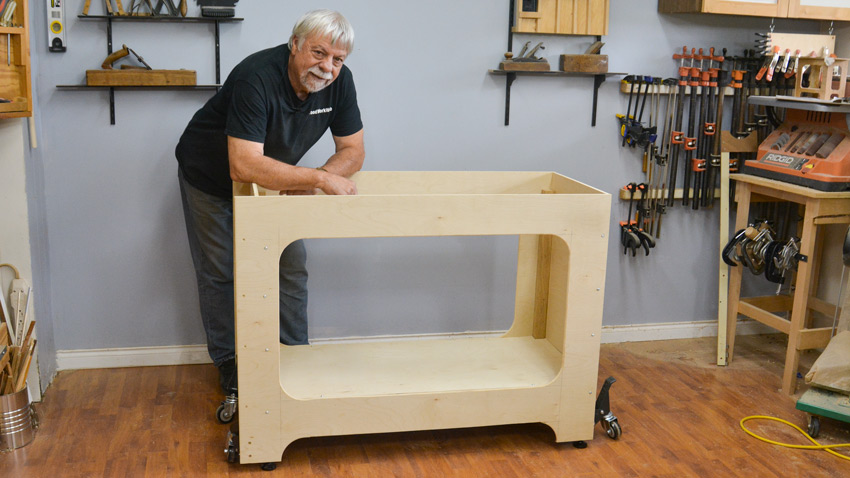 Part 2 - Creating the Top for the Workbench

I put a lot of thought into the top of this workbench before doing anything. I wanted a top that was flat as possible, and because I like to “refresh” my benchtops every few years, I wanted something that I could replace fairly easily.

My first thought was to make a torsion box top then to lay a piece of 3/4” MDF on top of it. This would ensure a flat, strong top that would be easy to refresh. I also needed to incorporate my steel woodworking vice into the bench and it only has a 2-1/2” mounting height so after taking off 3/4” for MDF it means my torsion box would only be about 1-3/4.

As I thought about this thickness of torsion box, it dawned on me that the most common torsion box in society are hollow core doors, and as it turns out, it would be a near-perfect thickness for me.

Hollow-core doors can have a variety of covers or “skins”, like steel, MDF or plywood. The cores can be cardboard, hardboard or natural wood. All of these cores work well and unless they get wet, like in a flood, these hollow core doors are almost always straight and flat and very strong because of the torsion box technology they use to make them.

At my local Habitat for Humanity store, I found a number of doors with plywood skins and I worked hard to try and find one with what I hoped would be wooden cross members inside. I make sure the door wast straight and flat before I left with it ... what a deal $10 for this torsion box door. 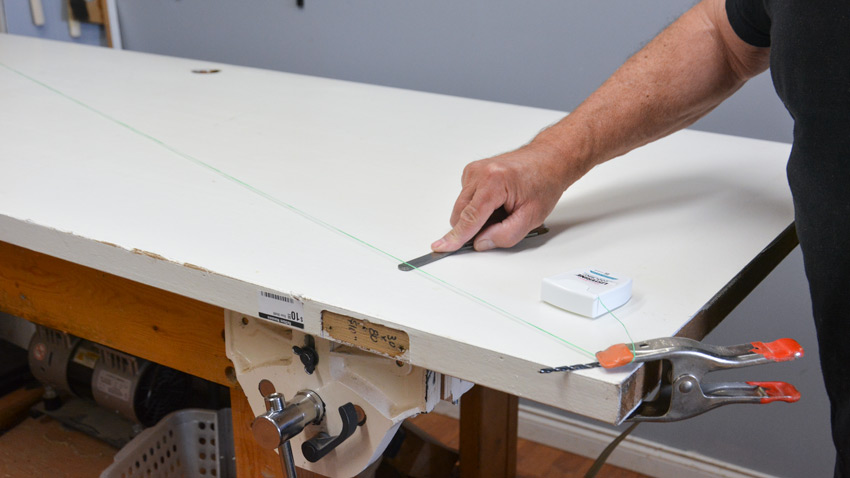 Testing the flatness of the door with a feeler gauge

When I got home I trimmed the door to the size I need which was 23-3/4” wide by 60” long. When I cut into the door I discovered it used a cardboard core, which is both good and bad ... cardboard is surprisingly strong (that’s why it is used for shipping boxes) and it is much easier to clean out of the edges of a hollow core door than wood is. 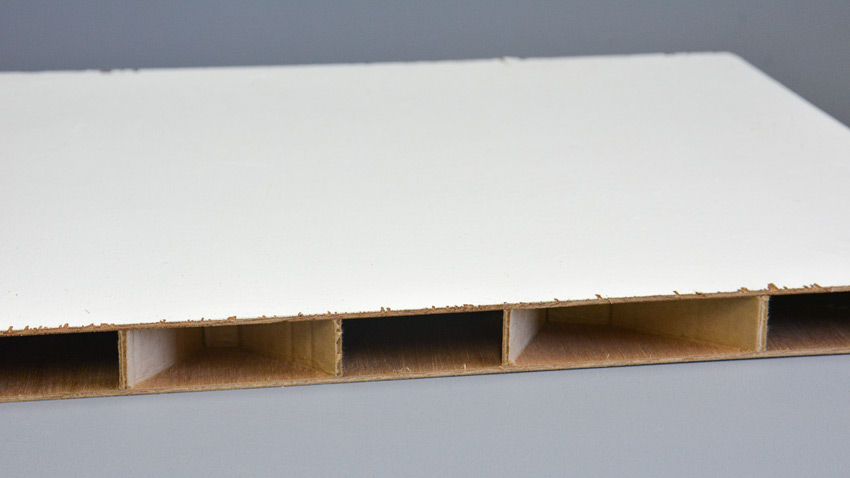 I needed to manufacture a plywood core that would support my vice that would be on one end of the hollow-core door, and I needed a flat straight piece of wood that I could glue into the edge. I used a slow drying construction adhesive for gluing in the inserts. This way I could take my time to make sure everything stayed flat and straight ... and it did.

Mounting the hollow core door to the workbench base was easy, but I still needed to make sure that the edges I glued and screwed on to the base that would support the door were flat and straight as well. I had cut this wood a few days earlier to see if it would warp a bit after being cut, but to my delight, it remained flat and straight after several days which meant it was stable.

I attached the door to the workbench base using flat head screws and making sure they were countersunk and driven in just barely below the surface to that the 3/4” plywood I would lay on top would not end up with a slight bulge anywhere and remain flat and straight.

Next, I drilled holes for my steel vice ... which turned out to be a bit of challenge to mount, but I took my time and eventually it came together. I then laid the 3/4” MDF on top of the door and fastened it down also using a few flat head screws. This then gave me an opportunity to finish mounting the vice because I wanted it firmly attached with bolts through all layers of the benchtop and used T-nuts in the top which worked exceedingly well. 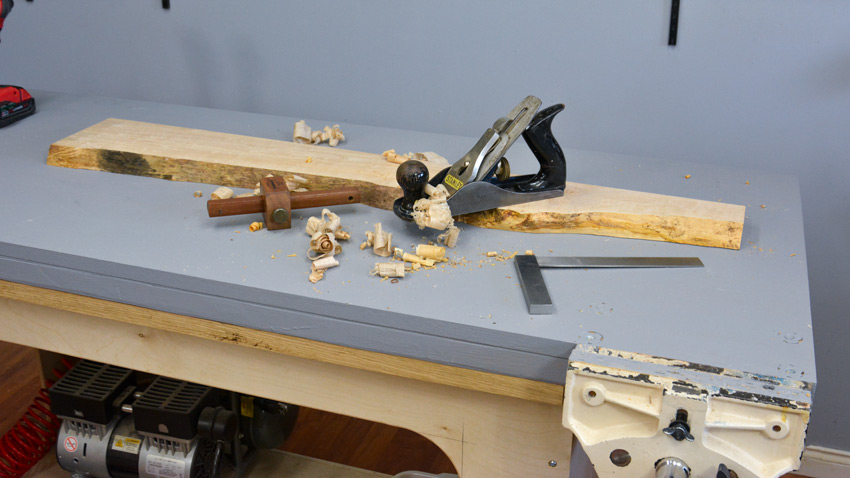 The last step was to paint the top with some epoxy paint, a very rugged hard-wearing paint that also has some anti-slip characteristics which make it perfect for benchtop applications, and it also happens to be near the 18% gray photographic gay card tone. The purpose of painting the top is to finally have top that I can film wooden parts on and not have them blend in with the natural wooden color of MDF.

It wasn’t until I was finally finished the workbench that I realized just how exciting it was to finally have the perfect workbench for me. I know this bench would not suit everyone but for me, it’s perfect. It’s easy to move around which will help me get better camera angles and I still have a highly usable workbench that is rock solid, has lots of easy access storage underneath, has a top that is easy to replace that is also dead flat and straight so using it for furniture builds will be excellent. 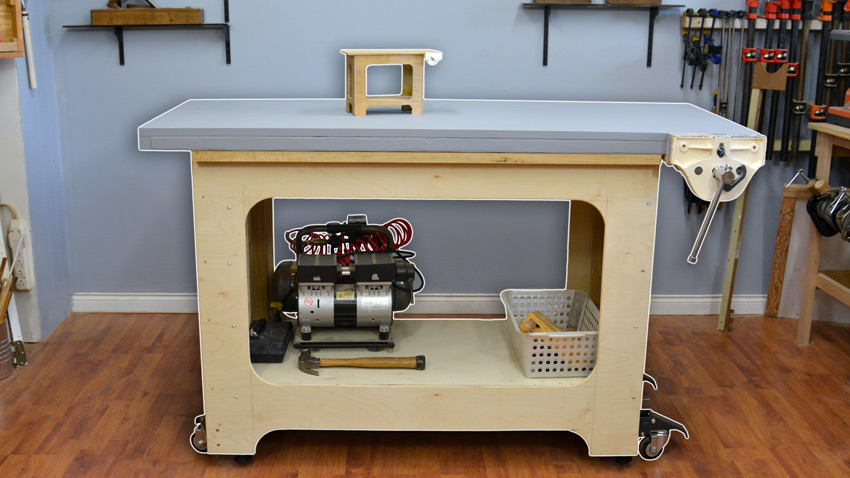 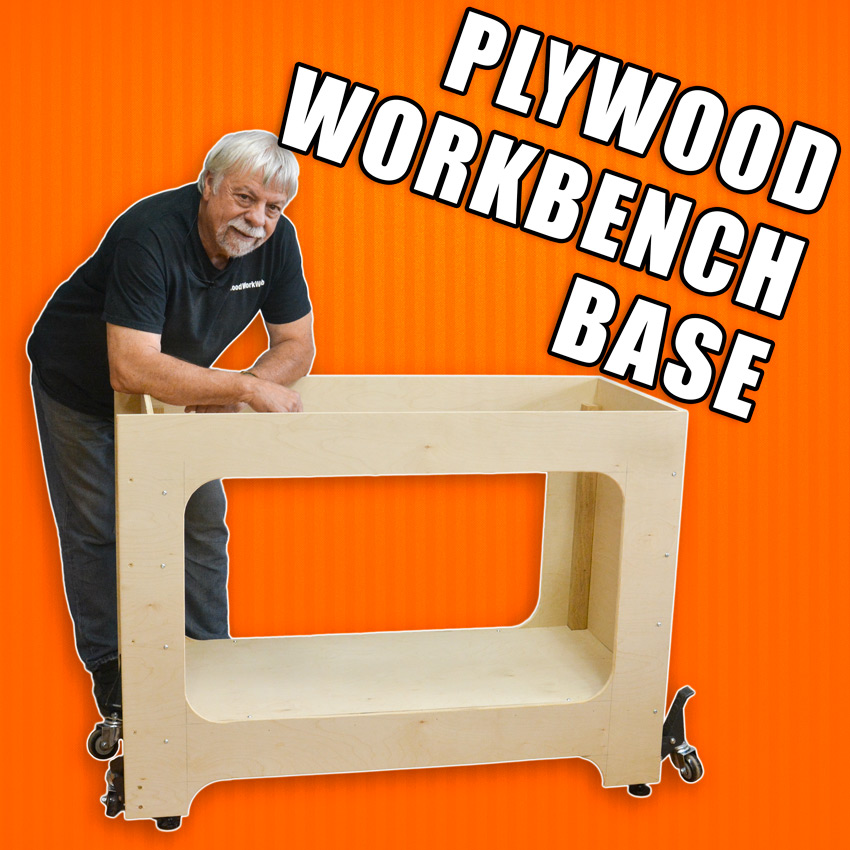 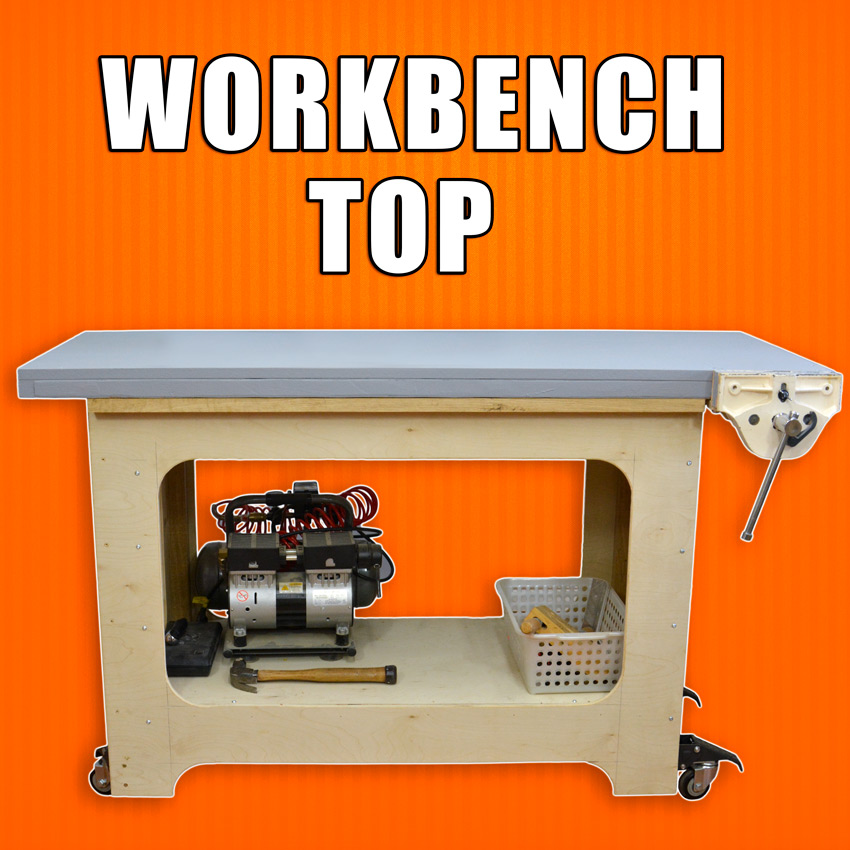