How to Build a Woodworking Workbench: Scale Model Prototype

It's finally that time for me.  Long, long overdue for me to replace my workbench. It was quickly thrown together as a “temporary” workbench about 23 years ago and has followed me on 3 house moves including 2 complete disassemble and re-assembles and still, I am using it. It has worked well for the most part but it's time to replace it with something more up-to-date and with some accessories I can add on over time.

I have been researching and putting thoughts together on a new workbench for some time and have come up with a simple design I like. The new design is very similar in looks to what I currently have but with some changes for the better ...

I have been unable to find a design that I like that is better than the one I have but it needs some changes. My current bench is not rigid enough, it’s far too heavy to move around, which I do quite frequently, the storage factor under the bench top is poorly designed and I know I can make significant improvements.

I have done a LOT of looking around for workbenches constructed from plywood and there are not very many to choose from ... too bad, plywood is an excellent choice for material and is exactly what I am going to use. By far, most workbenches are made from a variety of different size and species of boards that are all attached together in different ways, which is quite different from how mine will be made. Most workbenches are also very heavy, as the current bench is, and this is done to ensure that bench will not move around while we are planing, routing, hammering or whatever while we work on the bench. I think there are other ways to attain stability in a workbench without it weighing 400 pounds.

Selecting Plywood for Strength and Weight Saving
I decided to make my both my prototype and the finished workbench from plywood and I will probably select 1/2 inch or 12 mm thickness. This will be more than strong enough, and will also create a workbench that is rigid while not being extremely heavy. The 4 sides, of the base of the workbench, will be plywood with the centers cut away to allow access to a shelf under the top, and maybe even a drawer or 2.

Building the Prototype
I decided to build a prototype, first of all, to see what it looked like and to make sure there were no pitfalls that I might encounter. The finished workbench will have a significant investment in plywood and a wrong cut in a sheet of plywood can be a costly mistake so taking the time to build a scale size model is something I often do.

I love the size of my current workbench which is 2 feet wide by 5 feet long. Using this a base, and working from the scale of 2 inches equals one foot, I can create a model of how the bench will look. I am using some off-cuts of 1/8th plywood that will suffice nicely for this job. 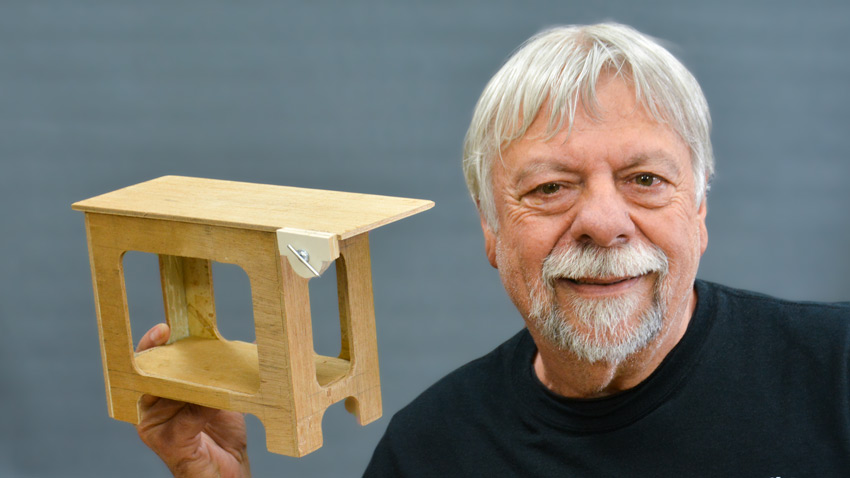 I started off at the table saw and made my scale size top which turned out to be 10 inches long by 4 inches wide.

Next, I cut the front and back bases which were equal to my 37-inch bench top height, and equal to 4-1/2 feet long, which I later discovered was not correct because I had to leave space for my vice, which meant cutting down my base lengths to equal of 4 inches... The sides of the base were easier as they only needed to be slightly less than the 2 foot top width which then came in at 3-3/4 inches on the model.

Next, I need to cut away the inside of the plywood sides. This will reduce the weight of the workbench without significantly reducing its strength and ability to remain rigid. I need to keep reminding myself I am building furniture and similar wooden objects, I am NOT rebuilding car engines so the bench does not have to hold the weight of a few hundred pounds ... but it probably could.  For the finished workbench and the model, I am going to cut the inside corners in a semi-circle. This arching adds a surprising amount of strength to the plywood, not unlike arched doorways and similar forms of construction that have been used for thousands of years. 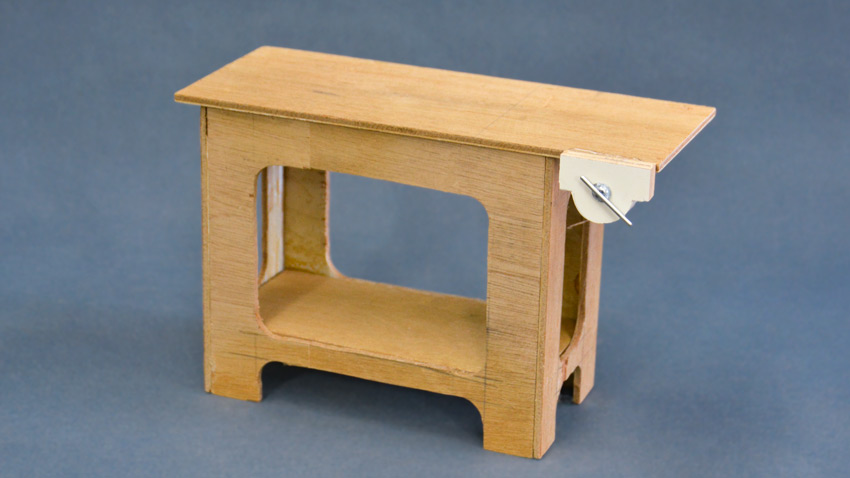 I used a 1-inch Forstner bit in my drill press and carefully cut out all the circles, including arches for the feet. I felt it was important that the 4 feet all have  elevated spaces between them because my experience with feet that are all on the same plane, is that they often wobble and are very hard to align .. and the bench even looks better and is easier to clean under, not to mention fetching nuts, bolts and screws I often drop and invariably they roll under my workbench.

On the finished workbench, I will be using oak corner pieces inside the legs to fasten the sides together. One side of the corner pieces will be glued to the workbench while the other side will simply be screwed on. The bench will also have a lower shelf which will also be sitting on support pieces and will also be screwed in place so the whole base will be extremely strong while not requiring a huge amount of weight.
The final thing to do with the pieces is to glue the base together and see what it looks like.

Checking for Sale Size
I looked at my assembled scale model ... it somehow looked out-of-scale. The best way to check this is to hold it at a distance, with the original workbench in the background and see if they align, which I have shown in the video ... and yes they did. I also decided to add a bit of a scale size wood vise on the end of the workbench to help achieve the real model effect and it really changed the look of the model workbench. 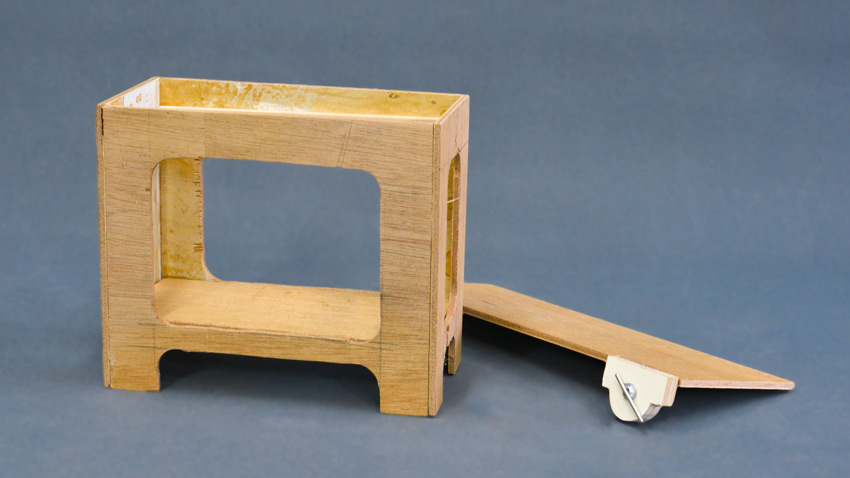 Next, I need to consider what I will do with the top ... 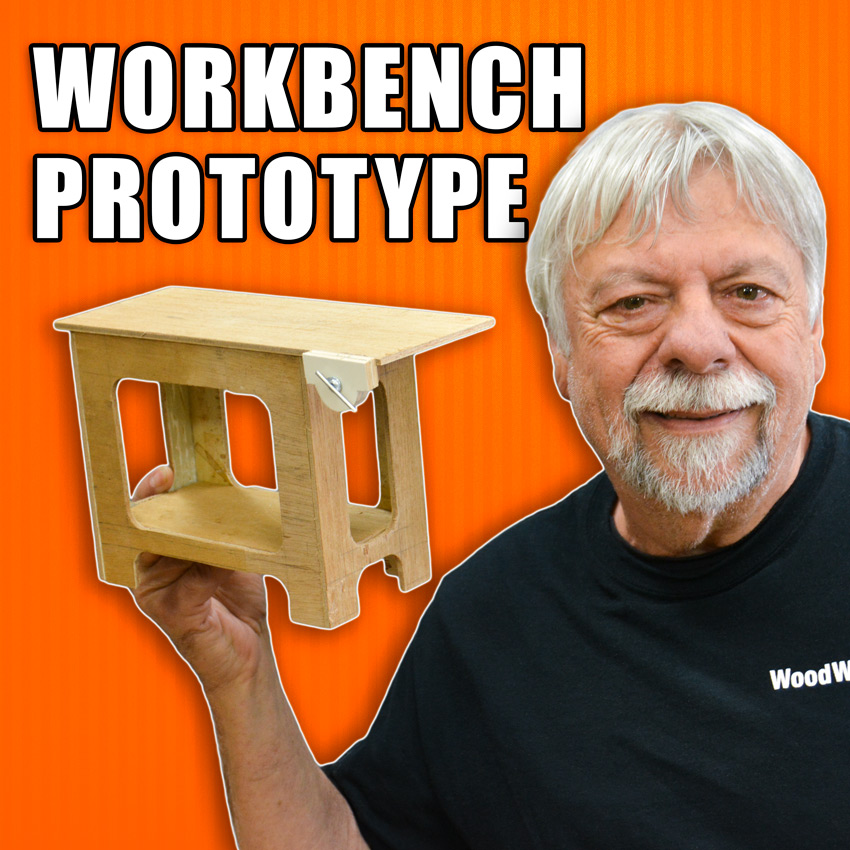