Designing Furniture with a Fibonacci Gauge 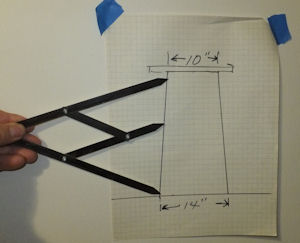 Every woodworker spends a protion of their time designing things to build or modifying existing plans to suit their own purposes and needs. Many woodworkers are also designers who start with a blank piece of paper and design their works from a concept or idea in their head, and plan the whole project out on paper.
One of the challenges of designing projects from scratch is ... how do you ensure they "look good", now I know that what looks good for one person may not look good for another, but we are talking about the "balance" of a project, not about whether you actually like the idea or not. For example you may not like the design of a certain chair, while other do, but the design of that chair may or may not be "in balance", which could be contributing to why some may not like it.

Back in early Greek times, when the concept of mathematics was being developed, a very keen mathematitian discovered a set of numbers that can be used to help desginers and architects design projects that are "in balance"". This set of numbers was morphed into an artchitectual device called a Fibonacci Gauge. The device is a simple concept that is basically like a three legged devider, but with a bit of a twist. When you set the 2 outside legs, the inner leg moves as well to a designated spot, and it is the middle leg that is used as well, in helping to design furniture, buildings and almost any type of visual artistic work.

In our case we need to use the Fibonaccin Gauge to help design a pleasing look to a small side table we had seen in a publication several years ago. We wanted to make a table of the similar design, but could not find the plans so had to go about making our own in a manner that  ...

" One of the most popular woodworking projects, for hundreds of years is the simple “Sitting Bench”. The bench is easy to make, can be used inside and outside for person or commercial uses and when finished makes an attractive and useful piece of furniture. In homes, in recent years, the sitting bench is seeing revival because it is such a useful item and lends itself to the kitchen, the living room, the bedroom, the entry and almost any other part of the house you can imagine.

The sitting bench we have constructed here is made from something called Cedar of Lebanon or “Cedrus Libani”. This species is native to the Mediterranean but is also introduced in some more temperate areas of North America where it is grown as an ornamental tree because of it's faster growing characteristics.

The main feature of our sitting bench is to have been able to “book-match” the top or seat of the bench just at the point where the sapwood and the heartwood meet, creating a beautiful contrast in wood tones. We were also fortunate to obtain some 2” thick wood from the same tree that allowed us to make the legs for the bench without having to laminate thinner woods together.

Our sitting bench design is attractive and useful and will provide years and years of accommodation for relaxing ones wearing bones. The version we have put together here is made without any mechanical fastening devices (no nails, screws, staples or pins). The unit was entirely put together with glue, which will hold it securely, under all normal use for many, many decades to come.

We also wanted to incorporate a bit of “character” into the bench which is why we selected some pieces with knot holes. We also rounded over all the corners on both the top, sides and legs so that even with constant use, there is little chance of anyone bumping themselves on a sharp corner.