Often when I am filming a video, I wonder what kinds of improvements Subscribers to my channel might come up with, once in a while 2 or 3 people will even come up with the same ideas for improvements which always amazes me, that a few people can have the same ideas. This video is a bit of a mix of improvements and new ideas, although I'm not sure where you draw the line, but in any even, some great ideas submitted from Subscribers ... thanks to everyone who sent in ideas, and I still have a long list of others to cover in later videos ..

There were a few good ideas with regard to my vertical drilling jig ....

Jacob sent me some very nice renditions of his ideas which included an important point, which is ... you do not have to use a Magswitch for this jig, any kind of clamp will work just fine, maybe not as convenient, but will work just the same. The second good point was that if your drill press post or column is getting in the way of your jig, you may be able to simply drill or maybe with a jigsaw, carve out a half moon cut that will allow the jig to sit closer to the post and maybe allow you some better drilling.

The third idea that Jacob sent was using a simple "V" block on the back of the face of the jig that allows for the clamping of round stock and dowels. Depending on your jig, you could glue it on permanently, or in my case I am just going to keep it handy with the jig and use it as a movable accessory because when I glue it on, it restricts my other clamping abilities on the jig, which is more important to me right now, but thanks Jacob for those ideas .... 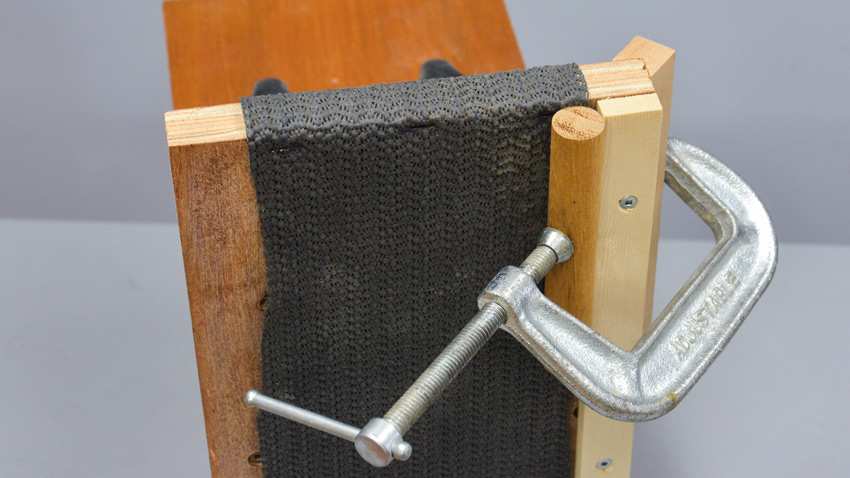 This tip is from Roland, and he suggests a quick and easy way of making drawer or door pulls from scrap wood you already probably have kicking around your shop. You can use any length and you can even use a variety of widths ... unless you want some uniformity, then you would want a consistent thickness to work with. Basically you cut the wood to a thickness you want, I used 6/8" and rounded made 2 passes on my 5/8 roundover bit, which gave me a half round on one edge of my board. Then you take that board to your table saw, set the blade to 45 degrees and lay the rounded over edge against the table saw fence, adjust width that you want to take off your wood and rung that through your table saw ... now you have a stock piece of lumber that you can cut to various lengths that will work well for either drawer pull knobs or even door pulls .. thanks David .. great technique. 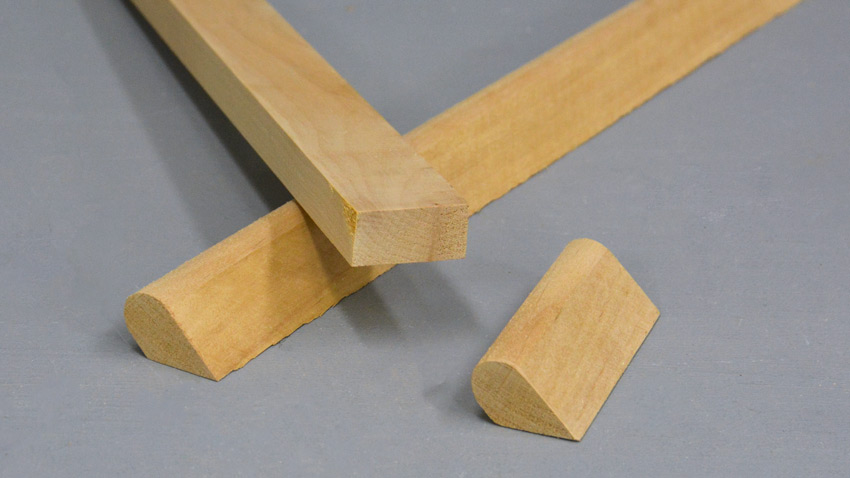 And still with the drill press Michael sent this idea ... it's so simple yet so practical, and that is ... when you are making using the drill press, and often changing different bits, instead of putting the bits back in their holder (which I often do) and then decide I need them again a few minutes later, and I forget which size I just used. Michael suggests using some of the new neodymium or "earth magnets" as they are often called, to hold the bits temporarily for you. As you can see, my drill press is the holding area for spare magnets anyway, what a great idea to use them as bit holders while drilling ... thanks Michael ... very useful tip. 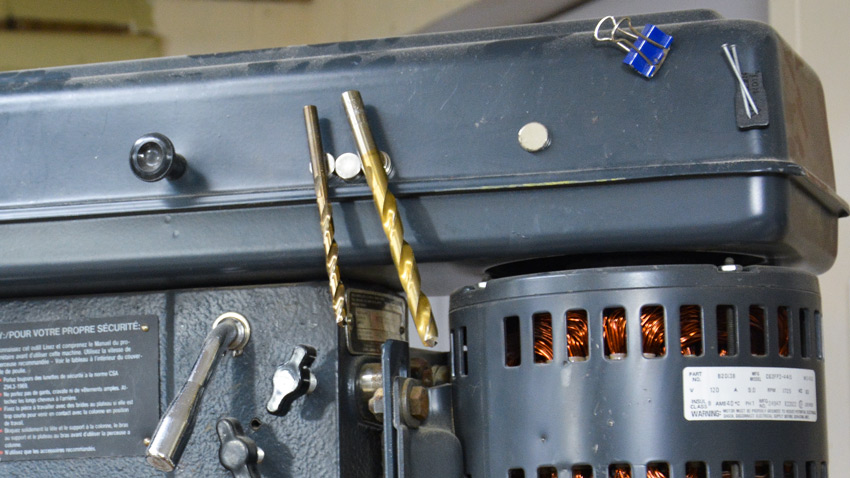 Here is a look at a portion of my cut-offs rack. As you can see a few of the pieces I have labeled what they are but I never know how long they are. David suggests writing the length of on the bottom of the boards ... this only takes a few minutes, even if you have to measure each one, and what nice way of looking through your cut-off pile and seeing instantly which boards will work and which one will not ... great idea David, I am going to go through and mark mine. 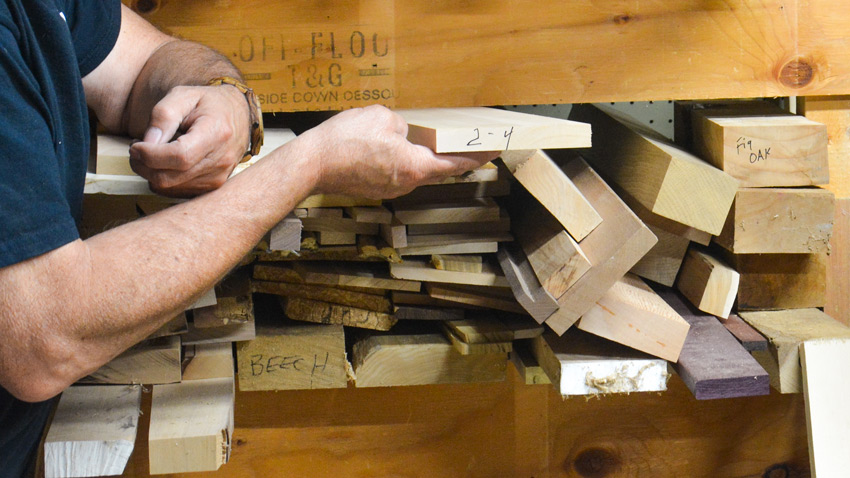 Here's another tip I am already using ... John suggests to keep one single band-aid that is easily accessible in the even you get a minor. This way you will always know where the band is, you don't have to dry and dig one out of a box while you are bleeding, and it makes the whole effort of covering the scratch quick and easy. I don't cut myself on tools very often but I do cut myself on wood from time to time and I hate getting blood on my wood so band-aids are a quick solution. I even keep a bottle of peroxide in my shop just to make sure the cut is clean and helps to prevent any infection ... thanks John ... I can really use this tip!! 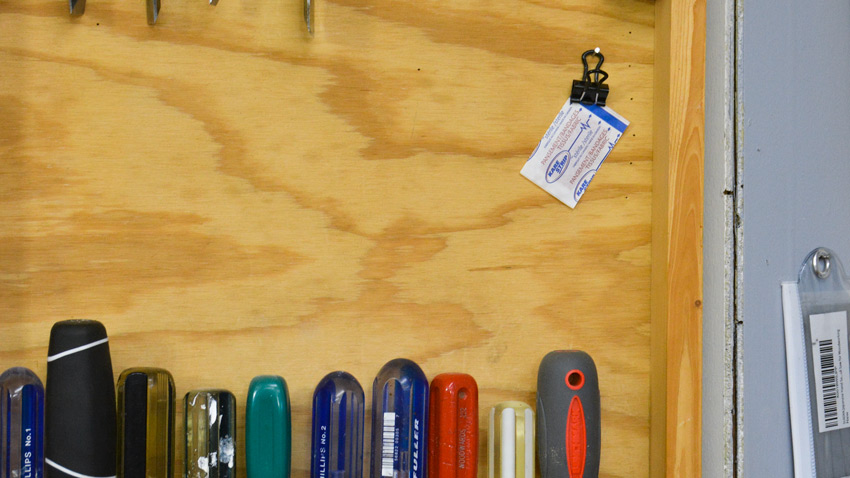 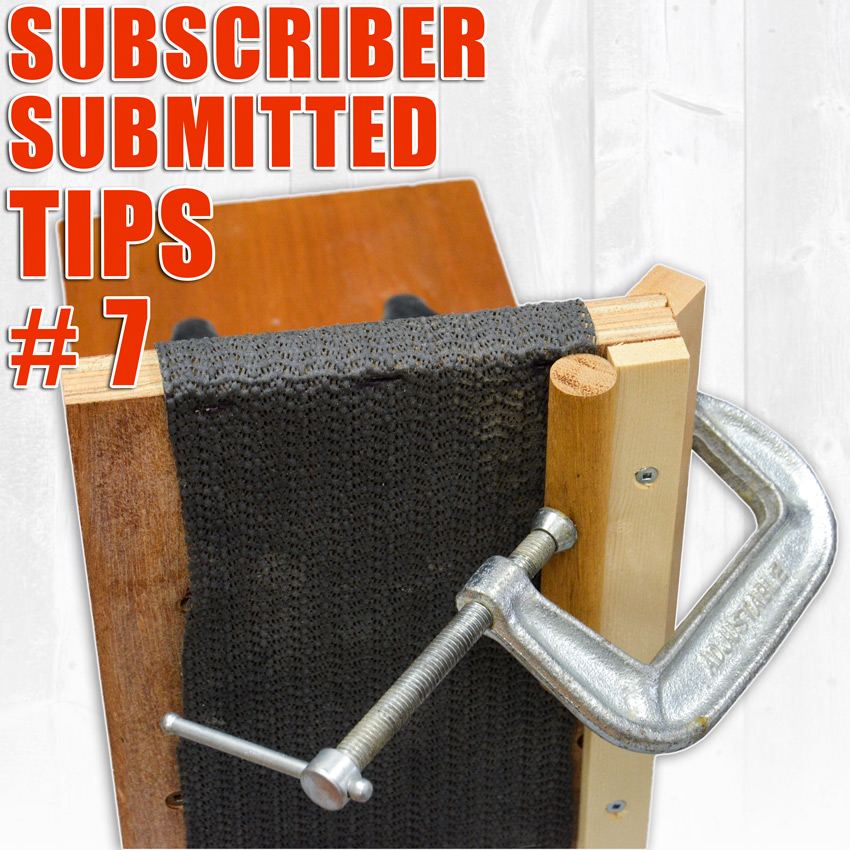