Today I was in the middle of another project when I realized that I had just used at least 3 little workshop tricks that I should share with everyone so rather than write them down and do them later, best I do them right now while I still have the machines at still somewhat set up for them.

Re-Drilling Larger Holes
I have been known to drill wrong hole sizes and often the holes are too small and often when trying to drill them out with a larger bit, especially a Forstner bit, the bit will often wonder, even when things seem clamped down and the result is a hole with quite ragged edges. On some things, this doesn't matter, but if you are working on some better pieces of furniture or boxes, you want to make these fixes as clean as possible. 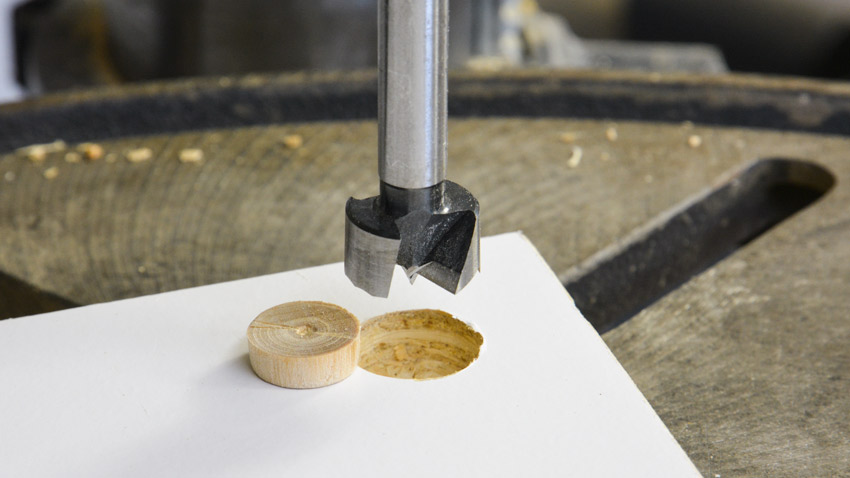 What I do is find a dowel the same size as the hole I just drilled. I want to drill the new hole larger and by cutting and inserting a dowel plug in the old hole, The new Forstner bit will have something to 'bite" into and therefore make a cleaner new hole. Now this works most of the time, but once in a while the dowel plug will not grasp the wood it is sitting in properly and it will spin as the Forstner bit is applied to it. If you are lucky enough to have got some drilling into your wood, the new hole may have made an outline that the can be re-followed and a clean hole drilled after removing the plug. The alternative is to glue the plug into the hole so it doesn't spin because a Forstner bit, in some cases will only spin that dowel plug in the hole and will not actually re-cut the hole.

Cutting Holes in Doweling
I don't need to do this very often but cutting holes in already round doweling means you need to hold the dowel piece perfectly vertical and you need to stop it from spinning when you drive the drill bit into it. There are a couple of tricks to make this job easier, and the first one is the type of drill bit you select. I have found Forstner Bits and Brad Point Bits work well for this, but ordinary Twist Bits, even when they are sharp, can often wander inside the dowel and make slanted holes. This also depends on how the grain of the dowel runs, but most doweling that you purchase has very straight grain, so watch for that too. 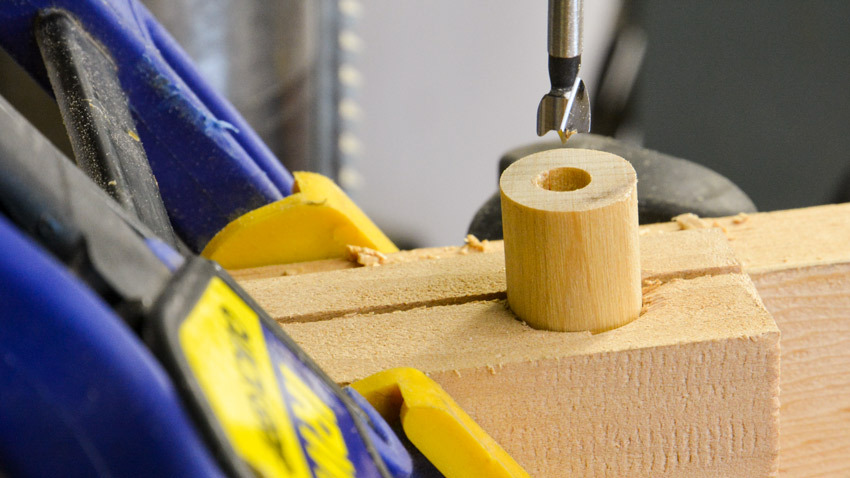 What I like to use is a piece of scrap wood with a hole about the same size as the doweling I want to drill the hole in, then take it to my table saw or band saw and cut a slot in the wood so that I can clamp the dowel into wood and keep it from spinning. Make sure you scrap wood is flat and vertical because as you clamp it you will want to make sure it is 90 degrees to your bit so you will get a nice straight, vertical hole.

Making Your Own Awl
I am a culprit of not always using every tool exactly that way it should be and I have been known to use flat blade screwdrivers as pry bars and the last time I did this, my near new screwdriver shaft actually broke ... yes, it did not bend, it broke.  Apparently, some new screwdriver shafts have special hardening techniques that makes the metal break - before it bends. I decided to sharpen the end of the broken screwdriver and make an Awl with it. I use an Awl very frequently and having something with a large handle, easy to find made sense ... and now this tool gets used almost daily for marking and for starting drill holes so that drill bits will not wonder when they are initially starting their drilling job. 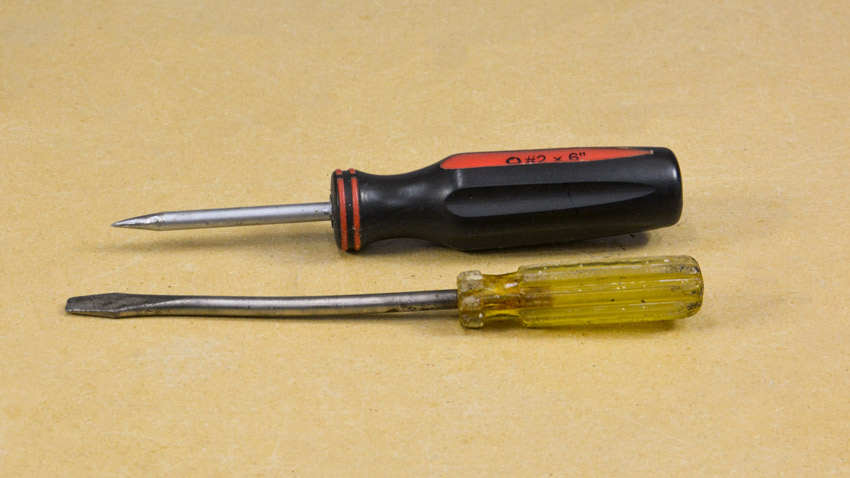 I happened to be at a swap meet not long ago and for some reason I noticed this old, bent flat blade screwdriver, that no one seemed to want (because it was bent) so for the cost of a few pennies I bought it and brought it home with the intention of making another Awl that I can leave in another part of the workshop that is often handy to where I work sometimes ... a cheap way of making another workshop tool will live a new life for many, many more years.

Scibribing Lines with Washers
I am always saving scraps of wood so when I am in my workshop, finding a thin piece of wood to use as a guideline for marking a line is easy ... when I am out of the workshop I am don't have access to these scraps so have to come up with other ways of marking parallel lines. 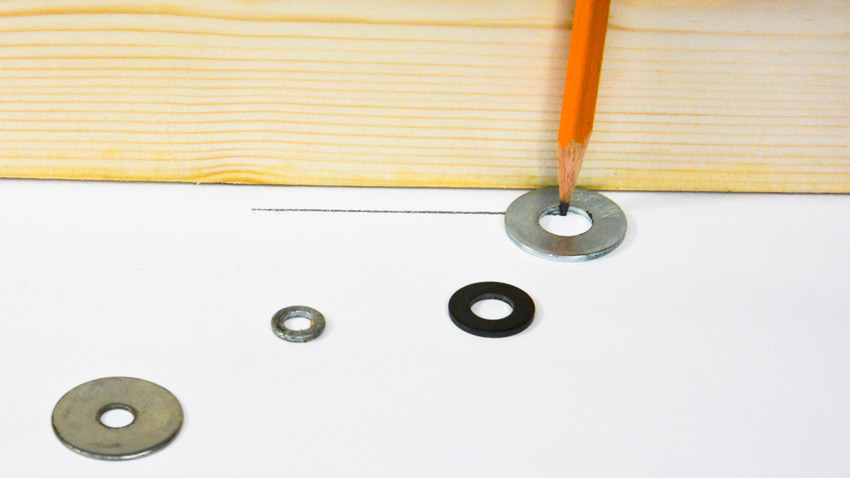 I always seem to have a few washers in the bottom of my tool bag and they always seem to come in handy for various jobs ... in this case, one of them was the perfect width to use for marking a line along a floorboard that needed to be trimmed. It gave me a perfectly straight line, but if you need the line to follow a specific track that might not be straight, the washer works great there too, and they come in differing widths ... a handy way of making lines straight or custom.

New Use for Magnet Retrieving Tool
I have a dropped ceiling in my workshop that for some things comes in very handy ... like for holding the remote for my dust collector. In the past, I have been using a short cord suspended from the ceiling by a magnetic hook that I can then move around from tool to tool and turn the dust collector on an off from that tool. This works great until I have to move the cord ... and that's when reaching up to grab the magnet it hooks can sometimes be barely out of reach. 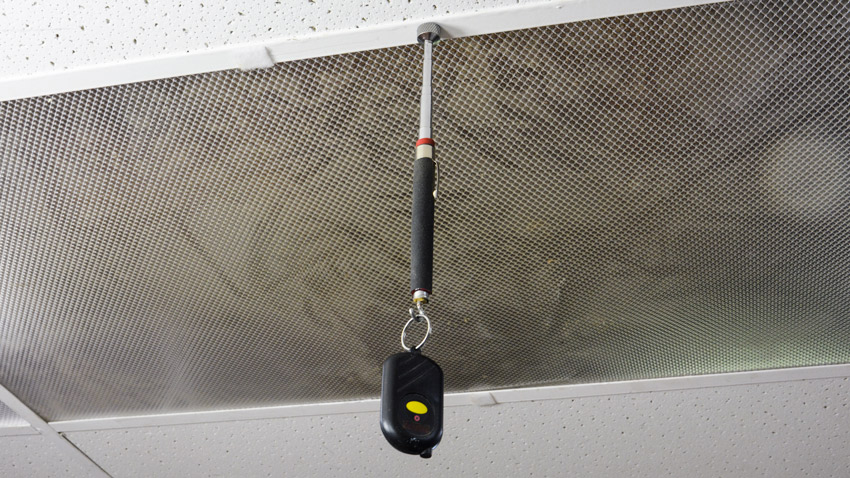 The quick solution to this was to slightly adapt my extendable magnetic pick-up stick, by adding a small hook to the handle by epoxying in a small dowel. Now I can easily adjust the height of where I want the remote to be, and I can easily reach up to move it from place to place and of course turn my dust collector on and off in a jiffy.
This thing works amazing, wish I had thought of these years ago ... 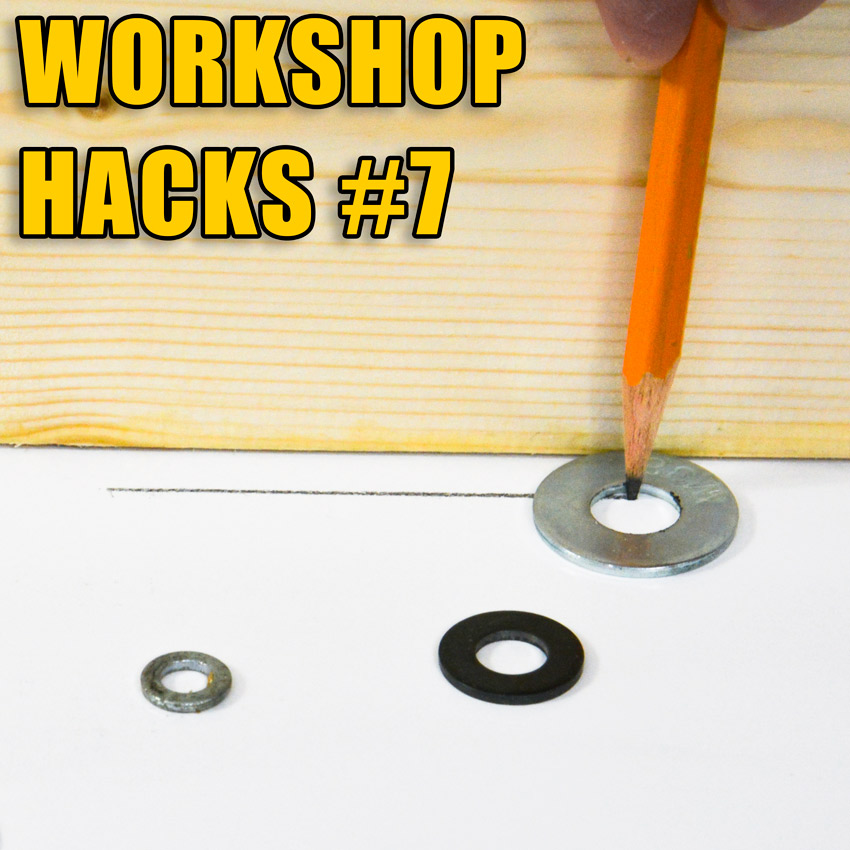