Making and iPad or Tablet Stand

Trying to integrate technology into a woodworking shop can be a bit of a challenge, depending on the tool. It's pretty easy to purchase cordless drills, grinders, sanders etc. but what about bringing technical information into the workshop in the form of a Tablet or iPad?  To start off with, the tablet needs to have a place to stand, because you can's always be picking it up and holding it, and often your hands may be dusty or dirty, which you also don't want to transfer to an electronic device, so the first step was to get a stand for my tablet. I had looked at the dozens and dozens of tablet and iPad stands, but found nothing that really inspired me, yeah, they all worked but ... hey, this is a workshop and here we try to make nice looking, functional things out of wood - not plastic.

I decided a simple "sandwich board" type design would work well, would be easy to make and would look good. The first step in the simple design was deciding on what angle would work best for both sitting and standing, and I determined that 30 degrees was near perfect for both.

Since I wanted the stand to be quite rigid, I decided that making box joints along the top edge would not only look great, but once glued, would hold the stand together extremely well and last for a long, long time. Next I had to determine what wood that would look nice, yet would hold up well which means it is probably best being a hardwood, and what thickness would it be. Then I needed to .....

After checking a few pieces of scrap wood of varying thicknesses, I felt that something a bit thicker than 3/8 would be work well, so I settled on 7/16 of an inch thickness. The size of the stand. i.e. the height and width would partially be determined by the size of the tablet, although they are all around the same size, so I picked a size that looked like it would work both vertically and horizontally, which happened to be 7 1/2" wide by 12" high.

After the two raw pieces of wood were cut to size the next step was to cut the box joints along the top, which menas that they needed to be cut at a 30 degree angle so that there would be no gaps at the bottoms of the joints. To achieve this I needed to use the box joint jig and cut the top of each board at 30 degrees. This meant that the boards needed to be at a 30 degree angle as they were being cut, which was not a problem, except that the boards need to be held in place.

I devised an angle block for the boards to sit on, which also meant they could be clamped to the carriage so they were safe to cut and would hold secure. Next step was to actually cut the box joints, which turned out very nicely

The last component was to make little shelf or lip that the iPad or Tablet would sit on while it was being used on the stand. I decided on Purple Heart as it not only contrasted nicely with the other wood, it helped make the stand "richer"
looking. A cove bit was used on the router table to make a small channel along the length of the Purple Heart. 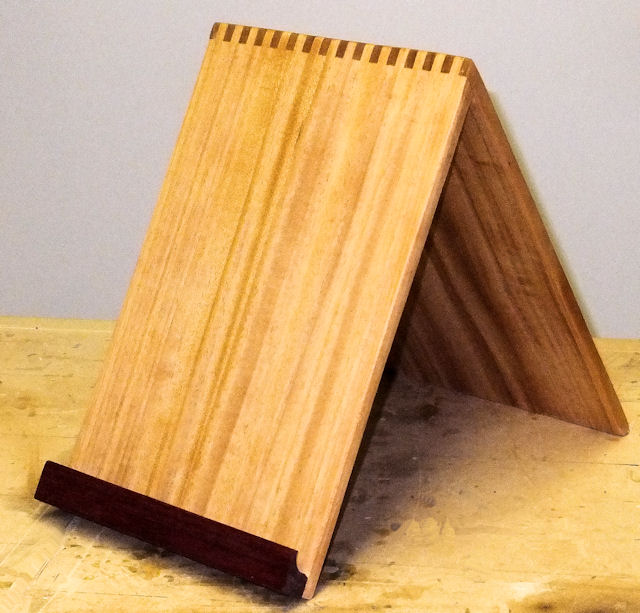 Assembly is very easy, put glue on both sides of the box joints on each side and slide the boards together and adjust as needed. Unless your joints are very loose, you probably will not even need to clamp them, just make sure they are in the proper angle as they dry, and when they are, now is the time to glue on the lip or bottom shelf of Purple Heart that will be holding the Tablet as it sit on the stand.

Once dry, the whole project is given a final sand, edges eased and it's ready for the first of three coats of Osmo. After the final coat, the project was wet sanded with 1200 grit and given a final wax which gives the stand the feeling of silk to the touch. All in all, a great, funtional project, easy and fun to make and only one of many, many possible designs.