Was I Wrong about Glue Joinery? - Joint Testing 2x4s

One of the nice things about woodworking is generally we rely on the strength of the wood, softwoods are not so strong while hardwoods are much stronger and man-made woods can vary either way, but jointing them together presents a whole new world of possibilities ... and what are the strengths and weaknesses we should know about.

One of the least common tools you will find in a woodworking shop is a Hydraulic Press ... like the one I have ...

I don't use this press all that often but it's still worth it for me to have because it helps me understand wood and joint strengths and I can pass that information along to others so we can all be more knowledgeable. And a  video I released a few weeks ago on using 2x4s brought forward even more questions on what kinds of joints are best with using construction grade 2x4s.  The only way to really know this is to test some joints and see how they perform. I tried to be fair and reasonable in my testing so that each joint would not be hindered by extraneous elements. 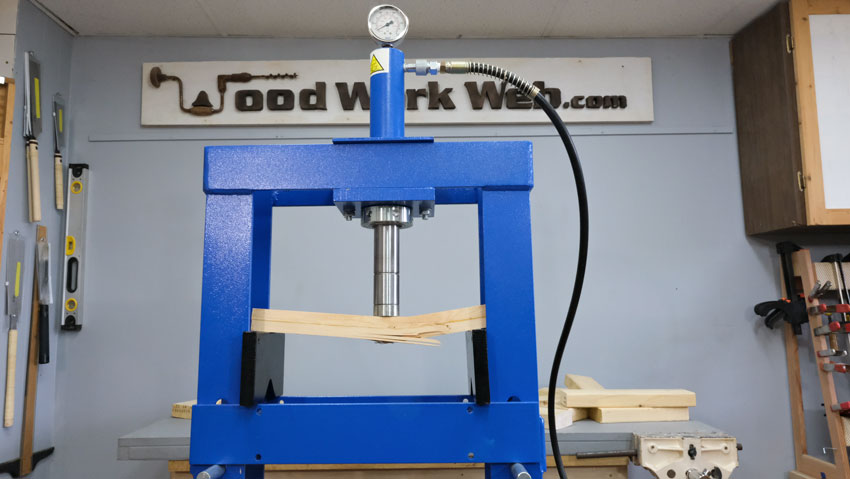 Pocket Hole Joint
I was pretty confident going in that the pocket hole would be among the poorest joints, especially for these softwood 2x4s and it was no surprise to find out that it started failing at only 100 pounds force, but because this joint uses mechanical joiners (long wood screws) the joint did not fall apart until it reached around 175 pounds force. 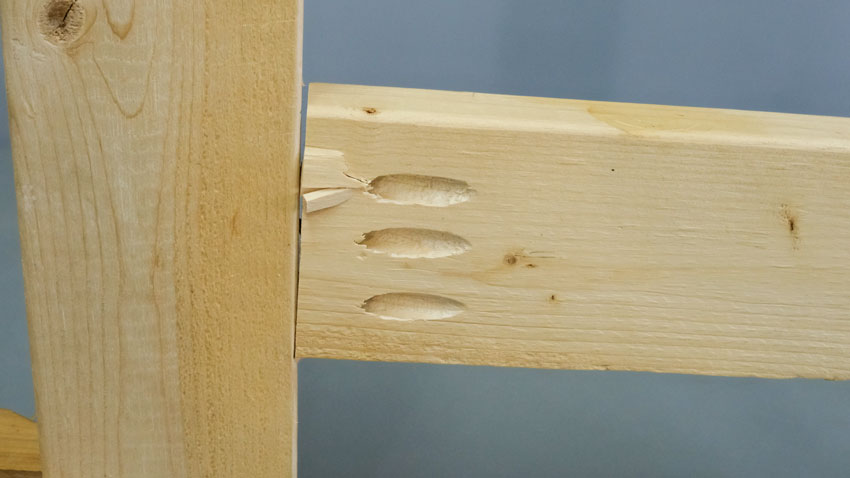 The Lap Joint
I had an idea the lap joint might be the strongest, in another test this joint has performed very well, the only real problem with this joint is that despite the fact it "looks" easy to make, it really is fiddly because you need to make sure each side is only half, otherwise the wood is not flush at the joint. To further test the actual joint I cut away all the wood that would give a false reading so that all that was tested was the glue and the face-to-face wood contact.
This test failed at around 275 pounds force, quite a bit more than the pocket hole but I thought it could have gone more. 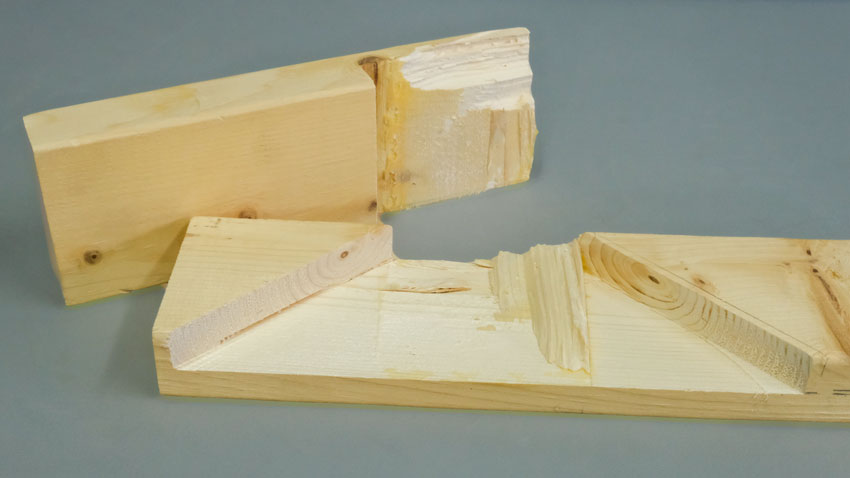 The Dowel Joint
I expected the dowel joint to perform at least as well as the lap joint, the nice thing with the dowel joint is that it is without question the easiest joint to make and it performs exceedingly well.  In my test, the dowel joint began to fail at around 225 pounds force, but in this case, it is clearly the fault of the wood as you can see none of the dowels broke and all of the tore the wood fibers from inside the 2x4 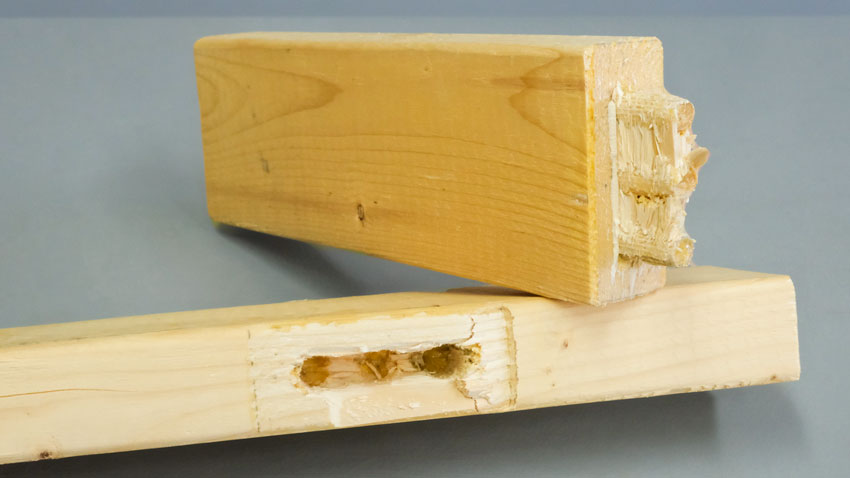 Butt Glue Joint
I decided to throw this joint in at the last minute because I have had fairly good results with this joint. The system I have used is applying glue to the end grain of the wood, letting it dry (or near dry) then reapplying glue to both surfaces, clamping, and allowing the glue to cure for at least 24 hours.
In this case, the joint failed very quickly and very noticeably, what is interesting is that it failed at about the same pounds of force as the pocket hole joint at around 175. Perhaps with a double dose of glue on the end grain side this joint might actually show a bit more promise. 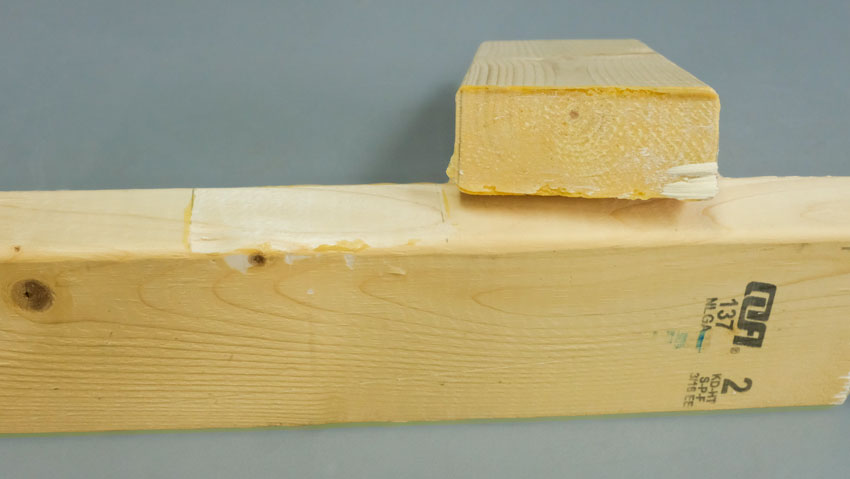 Laminated Wood Joinery
I have known for years that laminated boards ... that is boards I glue together as I showed in the video, are very strong. In fact, many times when a glue-up failed and I simply wanted to break the 2 boards apart, re-joint, and re-glue them, when I tried to break them apart the wood always failed before the glued joint. This knowledge has led me to believe that laminated boards are stronger than the same wood that is not laminated.   So I decided to test it.

As you can see from the results, according to my rudimentary testing, the glue really made no significant difference to the strength of the wood ... and I learned something new. and that it that the density of the wood appears to have more effect on the strength that the lamination ... at least with thicker more robust laminations. 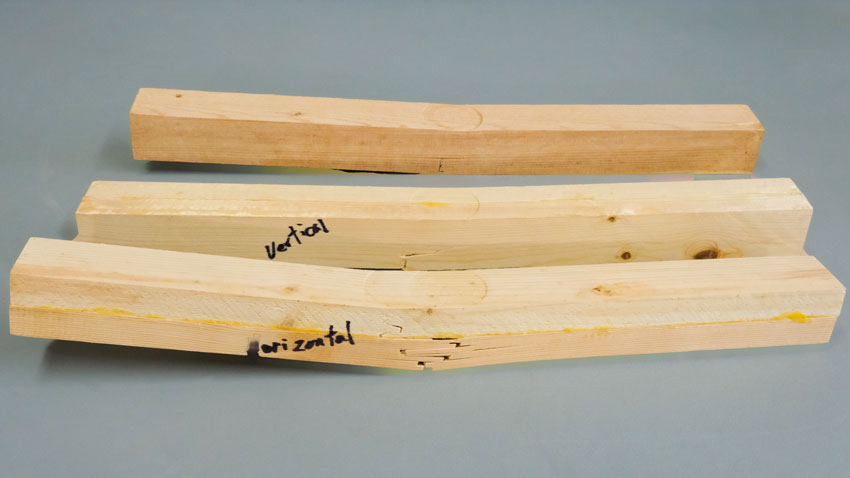 Kevin's  Dust Shield
I like to try to help out other woodworkers from time to time so this is a shout-out to Kevin who has designed this little item for collecting dust and wood chips from your drill press. It's easy to install and it works very well in collecting the wood chips although I haven't timed it, for me, it seems quicker and easier to collect the chips than it does for me to collect and sweep up or vacuum up the chips.
Kevin is making these one at a time on his 3D printer but he has applied for a patent on this.

If you are interested in learning more, or even ordering one of these here are some links to follow ... 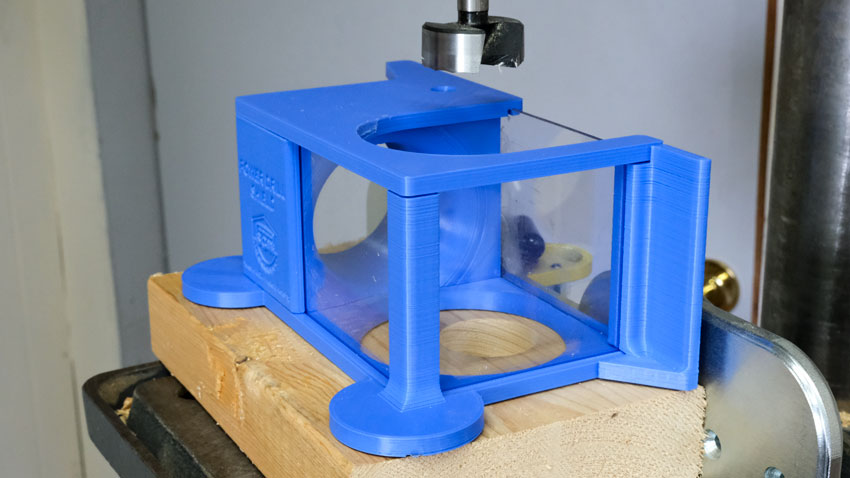