Restoring antique furniture is not for the faint of heart !!!
If you are an avid watcher of the television show The Antiques Road Show or other similar shows, you will know that it is a BIG no, no to do any work, as in re-finishing, re-building or re-storing to old antiques. Apparently collectors would rather have antiques that are in what ever shape they are, good or bad and they do not want anyone to alter the original object. In the event an item is re-finished or re-built the value plummets like lead balloon ... and I can understand that. What I don't understand is when I see very nice old furniture that is in terrible shape, that no one will do anything with because it "might" de-value the piece of furniture. In many cases some lovely old furniture has come un-glued, pieces missing or just simply badly abused over the millenia and now it needs some work to put it back together and maybe even a re-finish job to make the piece as close to it's original shape as possible.

The truth is, there are hundreds of furniture restores all over the world who fix, repair and re-finish old and antique furniture every day. I believe these restores do a service by preserving these valuables by making them able to withstand the next 100 years. The question I had, was what to do with an antique rocking chair that I was commissioned to restore.

Such was the case with this chair. I was asked to repair the chair because all the glue joints had come loose and the entire chair was about to fall apart, literally it was unsafe to sit in. When I looked at the chair I could see that it was entirely constructed of what looked like 3/8" dowels (they appeared to be dowels made of popular). I could also see that someone had tried to repair the chair about 20 years earlier and had not taken the chair apart, but had tried to inject some sort of polyurethane glue, like Gorilla Glue or similar, into the joints to try to fix them. It appears this worked somewhat but was not a long lasting repair. 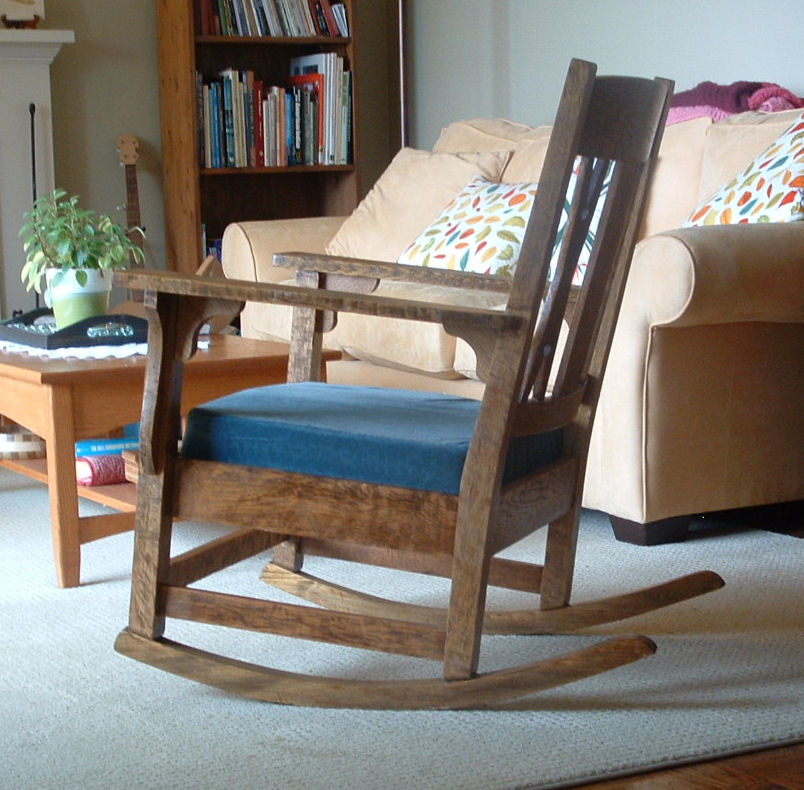 The Restored Chair, Back in the Owners Living Room

I also found out from the owners of the chair that it was constructed by a family member some time around 1910, which makes it around 100 years old. Other thing we knew was that the owners of the chair wanted it to be a part of their life, they wanted the chair to be a usable chair in their living room and that it was not going to stuck over in a corner and never used. With this knowledge we knew we had some challenges ahead. 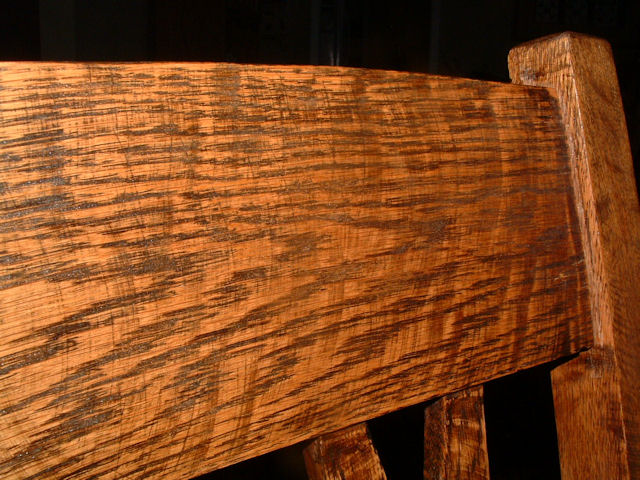 Original Machine Marks from Builder of the Chair

Using dowels is not a bad use of joinery for some projects, I just prefer to use old fashioned mortise and tenon joints in chairs. I feel that there is too much strain and tension on chair parts to leave to just dowels, depending of course on the chair design. I felt this chair was not an ideal candidate for dowels, but that is what we had to work with and to restore. Another area of concern for both me and the owners of the chair was the way the arms attached. The front of the arms was passable (barely) but at the back of the arm, it was attached to the upright with only one 3/8" dowel, and a 2" finishing nail pounded through from the outside. Not an ideal joint for a chair component that would undergo considerable strain every time some entered or exited the chair.

My greatest concern was to repair the chair without disturbing any of the original finish on the chair. It was quite evident that the original maker had only usage of rudimentary tools as there is a lot of tool marks all over the chair that I did not want to disturb. I also needed to so something with the arms of the chair to reinforce them without taking away from the "original look" of the chair. 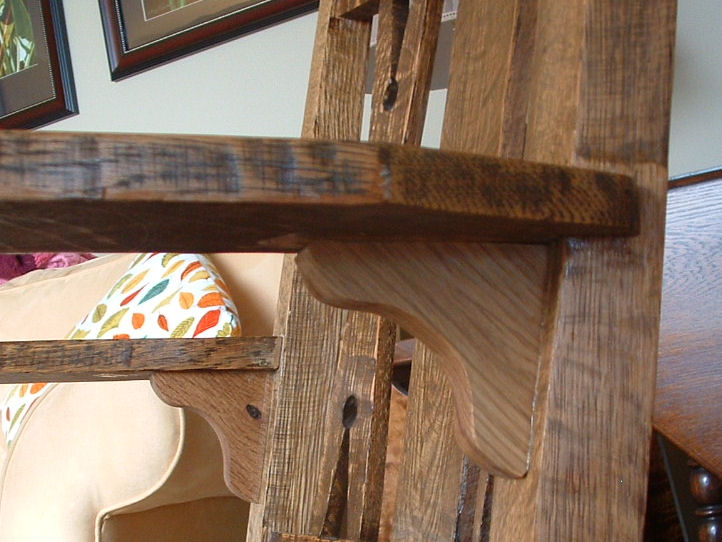 Reinforcing Bocks Added Under the Front and Back of Each Arm

After disassembling the entire chair, I felt that simply putting slightly larger dowels in throughout the chair, then glueing them all back together would work. Ha !!! no way !! The problem was that some parts of the dowels had to be removed, they didn't all come out cleanly and making larger holes for larger doweling simply would not work for every joint as much of the chair was constructed of about 3/4" material so drilling larger holes would start to compromise the strength of tha wood and those joints.

In the end, in most cases simply cleaning out the old doweling and cleaning out the old holes and re-inserting new Oak doweling was perfect. The glue for MOST of the chair was ordinary yellow carpenters glue, although 2 or 3 joints were re-joined with a polyurethane glue. This is because with a bit of moisture, polyurethane glues actually expand inside the joint. This was require in a couple of areas because inserting a larger dowel would not have worked, and the holes and the dowels were not a nice tight fit.

Like many projects I take on, I though I could do this one in a couple of days ... again AH !!! almost 2 weeks later I completed the last glue-up and finished the chair. I must say I was very happy with the final job and so were the owners of the chair. The arm was reinfoirced with a couple of angle block, that could at a later date be removed absolutely necessary to restore the chair to it's original shape. I decided NOT to use screws to reinforce the angle blocks, but to let the yellow carpenters glue do it's work. I have great faith in it.

This was a very interesting project ... re-building an old piece while maitaining as much history as possible. I'm not sure I am looking forward to doing more of this work, building from scratch still has a much greater appeal.