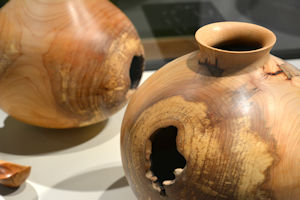 Not everyone has the gift of "vision". It is one of those attributes that comes from true artistry and there have been many in the past who had ideas and visions of what they wanted to accomplish and some have become well know names like Frank Lloyd Wright, Charles and Henry Greene, Gustav Stickely, Thomas Molesworth, George Nakashima, Harvey Ellis and many many more.

Today, we have even more exceptional woodworkers with a flare for new and innovative ideas and once in a while we get a chance to see some of their creations and modifications all in one place. Such was the that at the recent One Tree Exhibit hosted by the Robert Bateman Centre in Victoria, British Columbia, Canada and in association with Live Edge Design.  Robert Bateman of course is know world wide for is exceptional paintings, so who better to show of the works of fellow artist woodworkers.

The whole concept of the One Tree Exhibit was based on the concept that all the artists would use the one from the same tree. In this case, a big old Broadleaf Maple that had died some time ago which left portions of it spalted, some figured ...

Woodworking artists who wanted to participate in this event paid a specific entry fee, then were allowed to purchase what wood they wanted from the tree. Some chose wood from the outer sides of the tree, some from the middle, some spalted or figured and some normal wood and all of it was fashioned into the vision of what these artists and woodworkers planned.

Some amazing work by some very talented woodworkers