DIY Spalted Wood - Did I Fail?

Imagine my excitement when I noticed some GREEN spalting on a split firewood log I was helping to unload. Green spalting! I had never seen it except in pictures and there wasn't very much of it, but enough that I thought it was worth trying to culture a new growth of it and perhaps spalt my own Green-Wood !! Read to the end to find out what I discovered.

Roll forward about a year, and the wood I was carefully attempting to spalt had been in a moist plastic container and on the outside of the pieces of wood showed strong signs of fungus growth and hopefully would reveal Green inside ...

Here is a picture of the original half of the log that I spotted the "green spalting" in, note that it was rough when I found it and that I had trimmed it flat on my bandsaw. Also, I never did find the other half of this log. 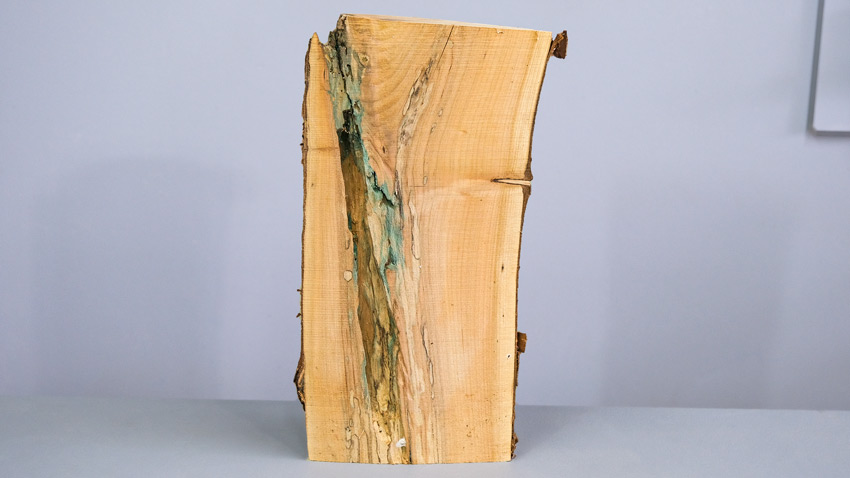 When making my own spalted wood, I used some Big Leaf Maple I had, that was still quite green (wet) but to make sure it would have enough moisture for my fungus culture to find its way into the wood, I also soaked the chunks of wood that  2 of them were approx. 2" x 8" x 14"  while the 3rd one was about 20" long.

The 2 pictures below are the book-matched boards from the 2 shorter boards. You can see that they are in fact spalted, but not even a hint of green. The spalting though evident, is not what I would call a "great specimen" yes they spalted, and yes they are usable, but I have many other boards that spalted naturally that are much more attractive. 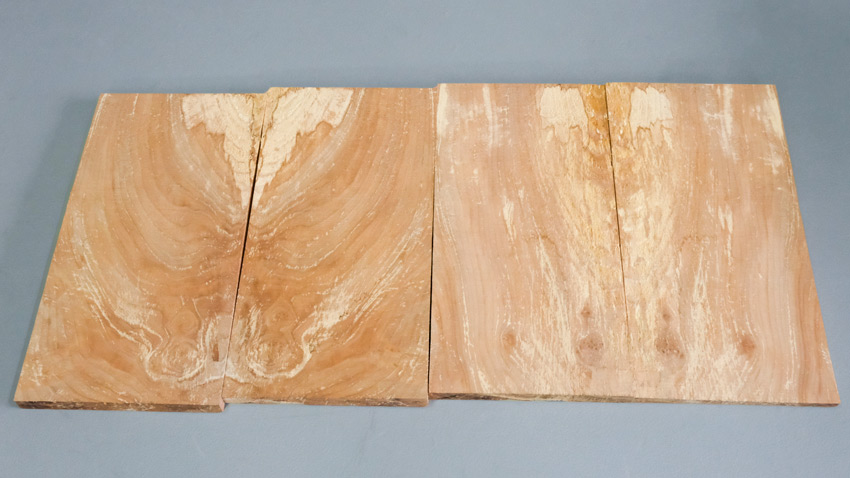 Below is the second of the 2 shorter boards. 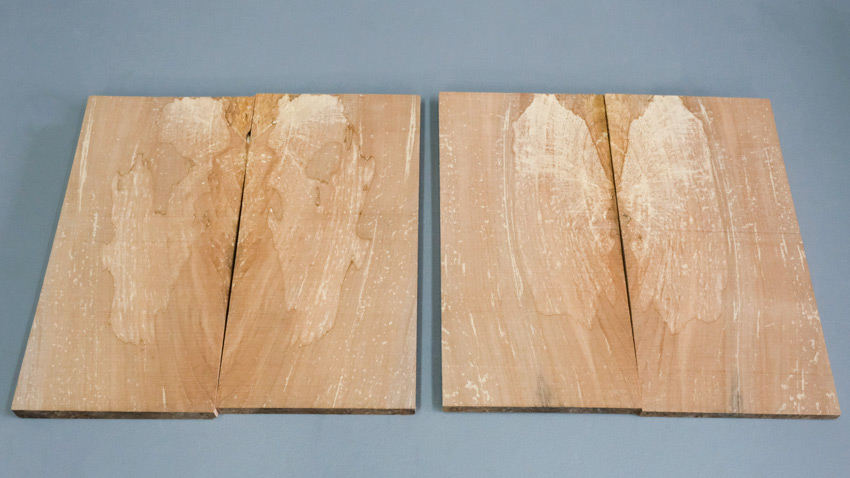 And below is the longest of the boards and arguably the least attractive of the three ... 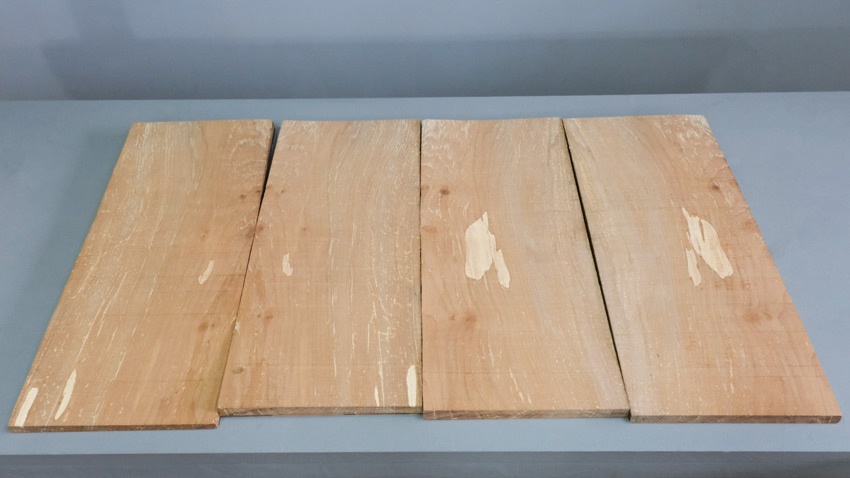 In an email I received from "David", enquiring if I had cut the green spalted boards I had cultured ... and did the green show up? He also asked the question was it really green spalting or was it possible the green was as a result of copper oxidization?  That question really got me to wondering, especially after I had cut the 3 boards and found not even a hint of green anywhere.

Lucky for me, I had kept that original log that I made the green spalt culture from and began to examine it closely and wondering if David had perhaps discovered the source of the green.

The picture below is a close-up of the top of the log where the spalting appears to have started and if you look closely, you can see it has a hard line downward where the green is clearly visible, then nothing on the other side. Almost like some green stain had run down inside the log.

Then I rolled and looked at the back of where that source of green was coming from and it is clear that there was once a branch in this location that has died as you can see in the picture below. there is even green color within where that branch had been which is now the outside of the log. The source of the green starts on the outside of this log then migrates in and down the log and fades as it gets further down the log. I see there is also a bit of spalting inside the log and a tiny bit of woodworm damage which would indicate the tree was probably dead when it was cut down. 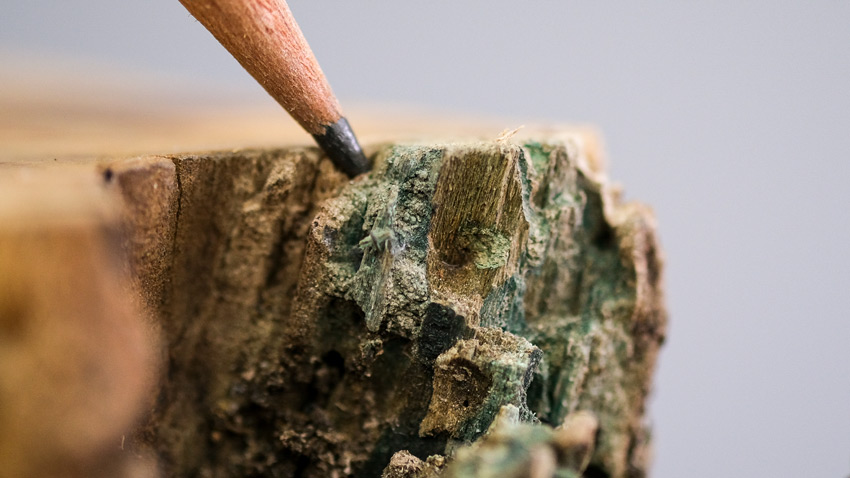 As you can see in the picture below, the green only migrates downward and not horizontally in any grand manner from what appears to be the start of some rot which was originally the branch. At this point I was pretty sure that David had called it ... I really think this is a matter of copper that has oxidized and any of you who have copper pipes in your house and noticed any minor corrosion near a joint in the pipes and where a small amount of "green" is evident ... that is what copper does when it oxidizes, it turns green. 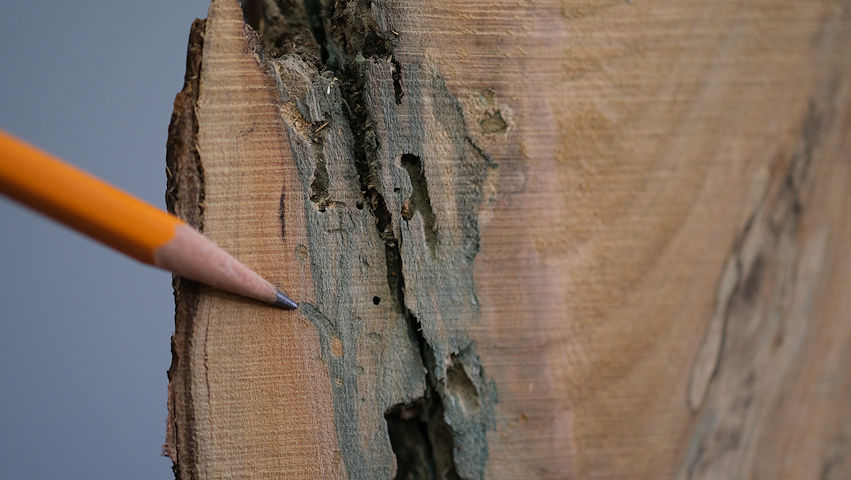 This log was what we call an "urban tree", many trees in urban areas have nails and screws driven into them wire and rope wrapped around them, and often the trees will overgrow these inclusions which then become items inside the tree. When you cut into these trees you can find all manner of items, we have even found a bullet in one tree one that my guild had donated to them for sawing into lumber. The bullet was deep into the tree and some estimated it was about 60 or 70 years deep into the tree.
I thought of trying to "test" the green area to see if there was a way to actually determine for sure that it is copper and I found some test kits that were between 425 and $40 and maybe there were some cheaper, but in the end, I really didn't want to spend more money or a chunk of firewood with what I am pretty sure now, is some green stain as a result of copper oxidization.  Of course, one question we all have is what could that have been from?  and since there was a branch at this location, my best guess is that someone wrapped some copper wire around the branch for some reason, and over time the copper wire has oxidized, maybe this is why the tree ended up dying, but as the branch rotted and fell off the copper seeped into the three and with rain and moisture worked its way down the inside of the tree.

Well so much for my first attempt at spalting, but it was fun and I did learn something so rest assured, I will be doing more in the future.