Making Spalted Wood in The Workshop

Making your own spalted wood is one of the things that woodworkers can do with their own wood in their own woodworking shop to make highly attractive wood, and sometimes even salvage some pieces of wood that are otherwise unusable. For those who are not sure what "spalted wood" actually is, it is the slow breakdown of wood caused by fungi, that will eventually cause the tree or wood to rot completely into the ground.

Spalting is the first step and if we get the wood and dry it before the spalting makes the wood too weak, we can often end up with some beautiful wood that can consist of different colors and often outlined by a series of lines. Depending on how much work you put into the process of spalting your own wood, the success can vary widely.

I am lucky to live in an area where there is quite a bit of rain, and quite a bit of lumber that falls to the ground, all of which contributes to much natural wood spalting. All I have to do is go out and find it. Much of what I come across is too far gone to use, but if I find some more recent trees that have died and are on the ground, they can often be candidates for spalted wood.

I have been using spalted wood for a couple of decades now, and the biggest use was when I built my kitchen cabinets and used the spalted wood as panels for the doors and drawers.

These kitchen cabinets were constructed of cabinet-grade plywood for the carcasses and fronted with Maple, then Spalted Maple wood veneered to create door and drawer panels. 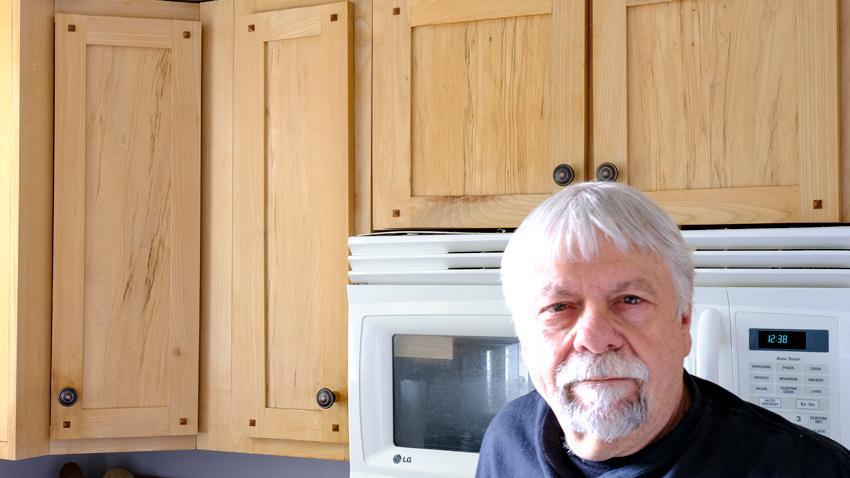 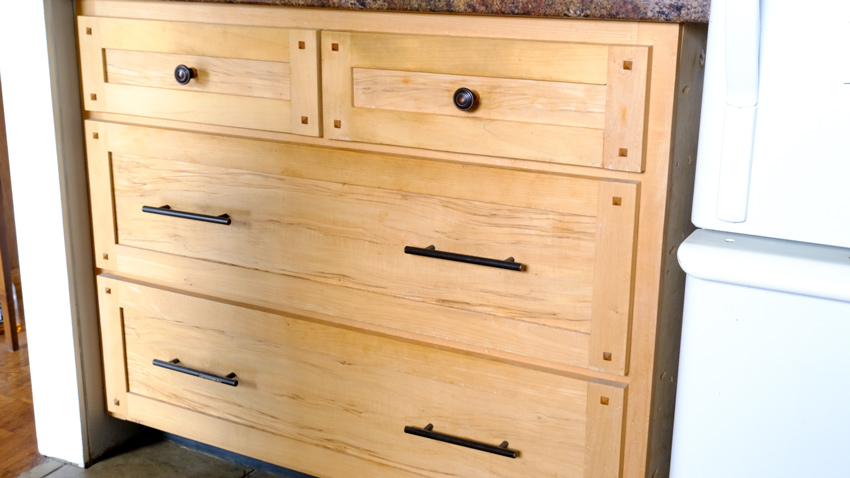 I also use spalted wood regularly to make boxes and other smaller items. This box is unfinished Spalted Red Alder. 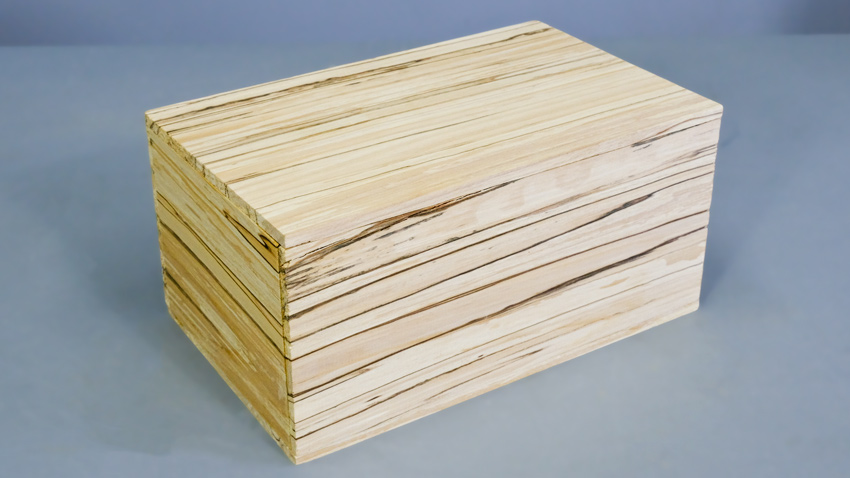 This box is another Spalted Red Alder box destined for an online auction in aid of a school fundraiser.  In this case, the top of the box is Mahogany which was veneered to ultra-thin plywood. You can find details of this build on this build HERE. 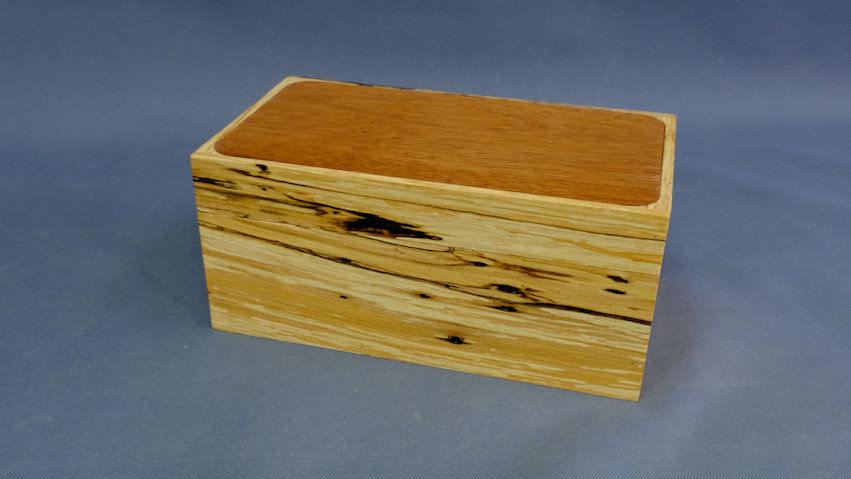 Some of the techniques I used in creating the makings for spalting this wood are found in the book below by Dr. Seri Robinson, from Oregon State. If you are serious about making some of your own spalted wood, this book will be a tremendous help. There are many different techniques to making spalted wood which is covered in the book from very simple "no equipment required" to more scientific techniques which I am creating a bit of a hybridized method to hopefully create colored spalted wood. 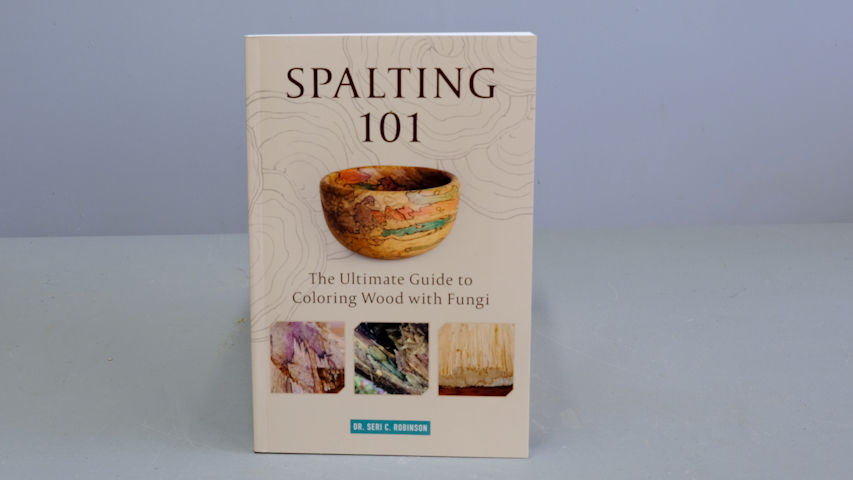 There are many, many different things that go into spalting your own wood and the highest success depends on how scientific you make the process. If you do the "by chance" method, you can still have success but your results can be varied. If you use a more scientific approach you can achieve results that are more dependable.
A more scientific and reliable result would mean acquiring specific fungi for the process which can often be acquired through regional or national Forestry Research organizations, keeping things like your wood, your water, and container as free from contaminants as possible, and with that, your results can be a bit more predictable. Fungi is an organism that, depending on the species, is not allowed to pass some state, province, or county boundaries so you are best to try and locate as local a sources as you can, starting with an agricultural or forestry government office, who will very likely be able to steer you quickly to a likely source.
As an alternative, depending on where you live and your ability to recognize fungus as it grows wild where you live, you may be able to harvest your own fungi plants that you can then culture by placing them in your own container and allowing them to grow under more controlled conditions.

There is no way I can explain all the different ways and means in this short little article, which is why Dr. Robinson's book is so valuable and laying out all the differences and how you can achieve some levels of success in spalting.

The whole reason I am doing this is that I discovered a split piece of firewood on a recent trip that happens to have some green-colored spalting in it. Of all the spalting I have found, I have never seen green spalting live before now. I know it exists, I have seen pictures of it (including in the book recommended above). This is the ONLY piece I could find. 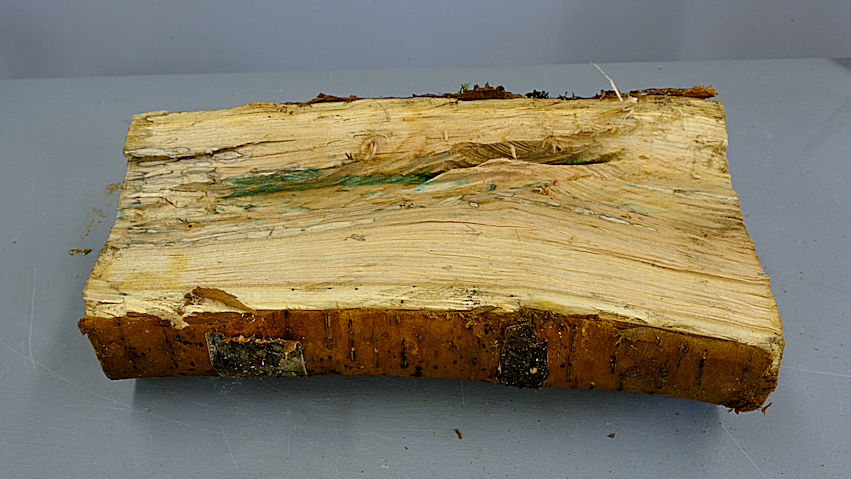 Here is a closeup of that green spalting, along with some other forms of spalting that may or may not be related.
My next challenge was how could I safely harvest this spalting? and is it still a viable (alive) organism? I finally decided that using my electric chain saw would be the best choice. I would give me chips of wood that contained the fungi and would mostly eliminate dust  ... which it did. As you can see in the video I attached the split log to a piece of plywood and positioned a clean plastic tote under the log and proceeded to slowly carve away at the spalting. I discovered quite quickly that there was a significant vein of green spalting inside the log as I began to work on the left side of the major green fungi vein and I obtained quite a bit of material from this hidden vein. 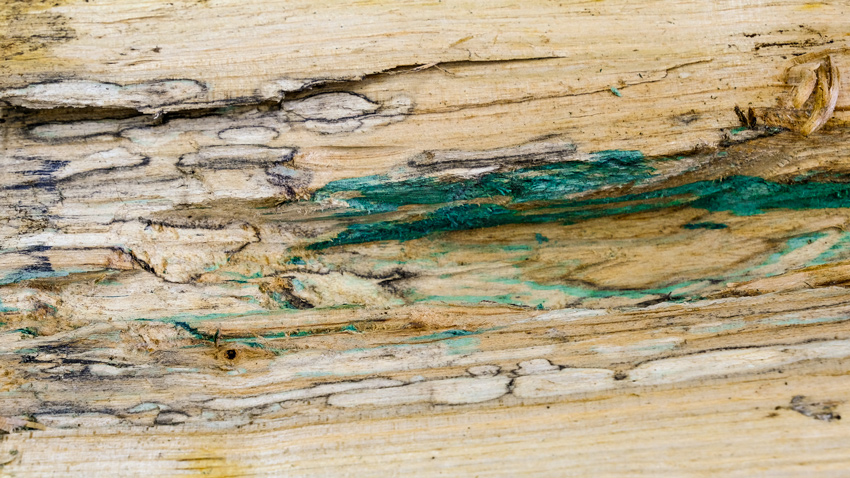 The wood I wanted to spalt is Big Leaf Maple, a softer maple which I know from the experience seems to readily take to spalting.
In the pictures below, to the Left is are my chunks of cut maple. By removing the bark, the fungi have a better chance of getting into the wood. With bark on, the fungi would enter the wood mostly through the end grain. The maple was 32% moisture content, then I soaked them overnight and I know that they absorbed a lot of water because the tote they were in, the water level dropped by about one inch.

The tote on the right below contains a mixture of Vermiculite and the chainsaw chips of green spalting. I decided to use the vermiculite for a couple of reasons, first, it allows the fungi someplace to co-exist with, and second, it gives me more material to be able to spread around on the wood as you can see in the lower picture. 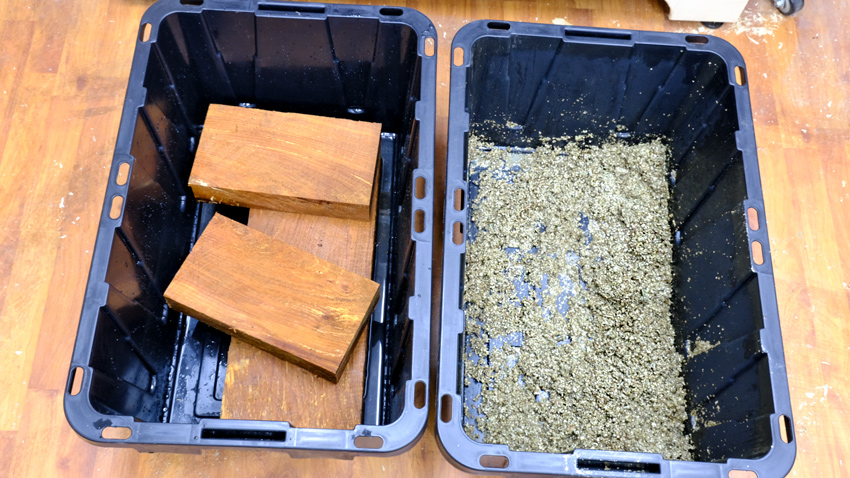 Here is the spalt - vermiculite mixture spread around all sides of the three pieces of maple. Because this is a local, natural fungus I have no idea what it is called or what its characteristics are, but because it is local, I have some sort of idea what the temperatures it will like, and my best guess is that around 70 degrees would be the ideal growing temperature for this fungus. I decided that I would like to try and "kick start" this fungus by giving it a couple of so days of near 80 degrees. I'm sure the fungus would tolerate that temperature, but long term, I would be safer with a bit lower temperature around 70 degrees.  So for 2 days, I have a small heating pad, and I can monitor the temperature and that is where it will sit at.
After the "kick start" I will carefully transport the tote to my small room containing my hot water heater, which will help to hold the temperature around 70 degrees. 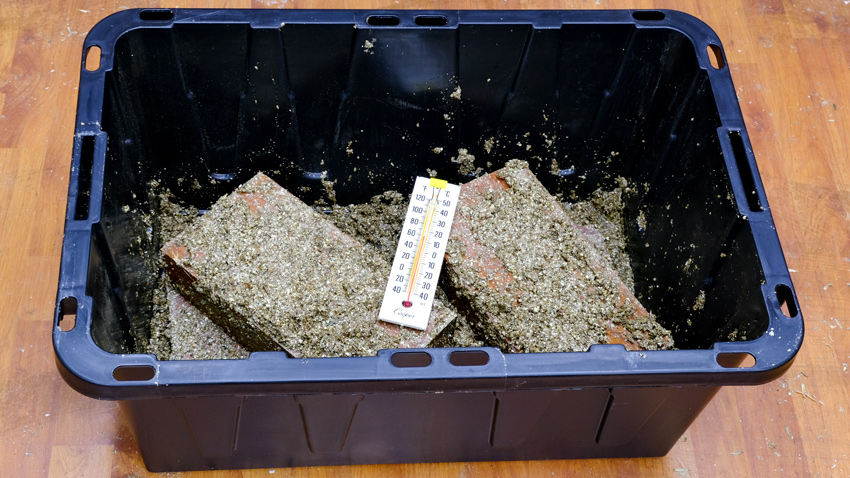 And last of all is the very hardest part .. waiting ... at least 3 months to see if this fungus will come back to life and impose itself into my wood.
I will hopefully have some idea that this is working because the wood should start showing signs of darkening and getting a fuzzy look to it, and maybe even the charming odor of rotting wood.

Hopefully, this will work, and if it does, I will have a mixture of fungus and vermiculite that I can use over and over ... let's see how it goes