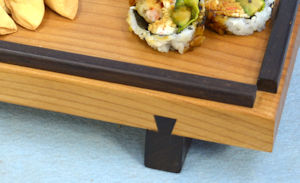 Anyone who knows their way around a kitchen will tell you that cooking and serving good food has as much to do with the presentation as it does with how good the food tastes. I think I would have to agree with that statement because when ever I find myself at any kind of a fancy eatery for whatever occassion it might be. The food is always served in a manner that makes it look as good as it tastes. Often this has to do with the combinations and colors of foods, but sometimes what it is served on makes a difference too.
And so it was that a recent trip to a favorite Sushi Bar inspired me to try my hand at  making serving tray for sushi, and well ... anything else that you might want to serve on it too, like pastries, vegetables or any combination of assorted foods.

What I wanted was something simple, but it still needed to have enough detail to make it interesting without taking away from the food, after all the tray is to enhance the food not distract from it.

Watch this and other similar videos on YouTube - https://youtu.be/Hq6OcwCOpl0

To start off with I wanted to platten part to be thick as this is part of the detail. A piece of 3/4" board would have worked as well, but something that is one inch thick makes more of a statement. I thought about what kinds of legs or stands I could use for a tray like this ...

.. then decided it would be nice to have something that used the thickness of the platen, and that is how I ended up with the sliding dovetail idea. Not only would the dovetail become part of the look of the tray, it would also serve as functional component by being the legs as well and with contrasting woods it would make a nice, but subtle enhancement.

Flattening the top was made easy my using my planer jig and once the top side was flat, I simply flipped the wood over and planed the uneven bottom until it was flat as well.

The next thing that needs to be done is to cut the dovetail slots in the bottom of the board.. I determined a line about 3 inches the side of the top that would be where the legs would look best. After installing the dovetail bit in my router table, and using a square push block I cut one side then the other with one pass using the dovetail bit. Next I move one end of the router table ever so slightly, about 1/4" refastened it down, then made the second pass through the top. This gave me a lightly wider dovetail groove in which the feet would be able to slide into.

To make the feet, I found a board that was also wider than 3/4". It needed to be to give the whole tray that "oversized" look. To make the dovetail feet I positioned the dovetail bit just slightly proud of the router fence and cut both sides of the wood, then flipped it and did the same thing on the other side.  The first pass, of course, made the dovetails still much too wide, but my ever so slightly moving the router fence back and leaving the dovetail router bit further from the fence with each pass I finally managed to make a dovetail pins slide into the dovetail tails. The fit was snug, but I wanted it that way rather than loose.  I have found that having 2 large feet on objects is not always ideal, and I was afraid that if I left the feet as wide as the top and glued them all together, a couple of things could happen, first I could end up with the top cracking, which for a food item like this is something you can never have as it now become a serious health risk, the other option is that the top might shrink or swell and could at some point be larger or narrower than the the foot, because of how the grain runs. For large pieces of furniture you can get away with this, but on something small like this sushi tray, that is right in from your eyes, having something that +"appears" like it was put together wrong or is broken, is also bad .... and so, the creating 4 separate legs was easily the best option.

The next component was the small rails for the top. these are both functional and decorative as they are made from the same wood as the legs and thus give a contrasting look to the top along with the detail.

After all the components were made, The assembly began with the feet, and for these I glued them on one side only, the point closes to the edge of the tray. This way the legs would be firmly attached but if the wanted move it could. There is the risk that the side top rails might detach on one side or the other if the top moves a lot, but they are also attached with 23 gauge pins to hopefully elleviate that problem should it occur.

For the finish of this tray, I used my go-to product Osmo, and gave the tray 3 coats over 3 days. It is food safe and dries to a very hard finish so it's perfect for an applicatioin like this.

note: In Europe, Osmo is widely availble but not as much in Canada and the US. For Canadians interested in the product, one place to check out is http://www.produitsEco-Reno.com  in the US, Osmo is available from http://www.amazon.com