It's not until I get around to actually fixing a problem that I realize just how long I have been putting up with the issue in the first place. Case in point, replacing the wheels on my workbench !!  But I do have an excuse, I wondered for a long time what would be the best alternative for the replacement.

As it turns out, pretty much anything would be better than what I was putting up with ...

As you all know I am working from a pretty small workshop, but it works for me ... usually. What this means is that my tools need to be on wheels so I can easily move them around, and that includes my workbench, which is the one thing I seem to move around the most, and sometimes I only need to move it 2 or 3 inches in one direction or the other, sometimes it is for filming, other times it is because I  need to move another machine in or out.

The problem with the wheels I had on was that whenever I moved the workbench a small amount, some of the caster wheels would "self engage" and often I would not realize it until I started to do some work on the bench and would find the workbench would move. I would then need to stop what I am doing, get down on my hands and knees and physically release all the wheels AND make sure the wheels were just lying on the floor and NOT engaged for movement. Super Annoying !!!

It's clear that I have come to hate these wheels, I even talked about it in another video, but that doesn't mean other people feel the same. Like everything I say that I hate, other people will find these working just fine so if you have this kind of wheel and they are working fine for you, don't change them just because Colin doesn't like them.

One of the options I considered was installing a set of linear actuators but these were going to be quite costly at about $60 a corner, plus a power supply, switches, and other electronics ... I just thought there was a more simple method.

You can see in the first part of the video how easily these wheels will self-engage, and below is a closer look at them. To be honest, if you use these wheels on a machine and once it is in place the machine cannot be moved until it is time to move it again .. these wheels "might" be ok. The reviews for these wheels all show high marks, unfortunately, they don't ask the correct questions for review. 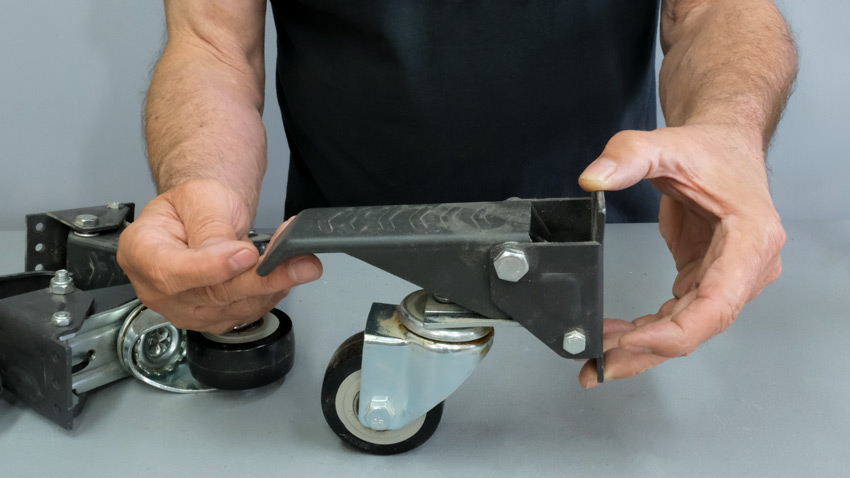 Rather than having ALL wheels pivot, I decided this time I would go with fixed wheels on what I call the back of the workbench. These were made moveable by attaching to a scissor car jack I bought from a local car wrecker. What I did not realize when I decided on using a scissor jack, is that they are not as "fixed" as I had imagined. They are quite non-rigid in their design, which makes sense now that I see it working because all parts of these jacks need to have some movability.

I noticed at first when I moved the workbench that the scissor jack allowed for quite a bit of "sway". That is not a huge problem because it only happens when the bench is being moved and the sway is noticeable but easy to live with. I mostly solved this by experimenting with putting a couple of screws under each side of the plywood wheel support so that when the wheels are fully extended they are sitting on the screws. This worked quite well and I plan to glue some wooden blocks in the future to make this even better and more permanent.

Using a single pivoting wheel on the other side of the workbench was not my idea. A number of bandsaw manufacturers use a similar system as to a variety of other machine manufacturers. In their case they often have a long handle with a wheel on the bottom that fits into a coupler on the tool where the handle is used to both elevate the wheel under the tool, then is used to pull the tool along. I have used these before and they work surprisingly well.
My idea was to use a trailer jack with a wheel on the bottom that is used to reposition various kinds of smaller trailers. I found these on sale at a local dealer for only about $35 and even considered putting 2 on the back and 1 on the front ... that option is still on the table. 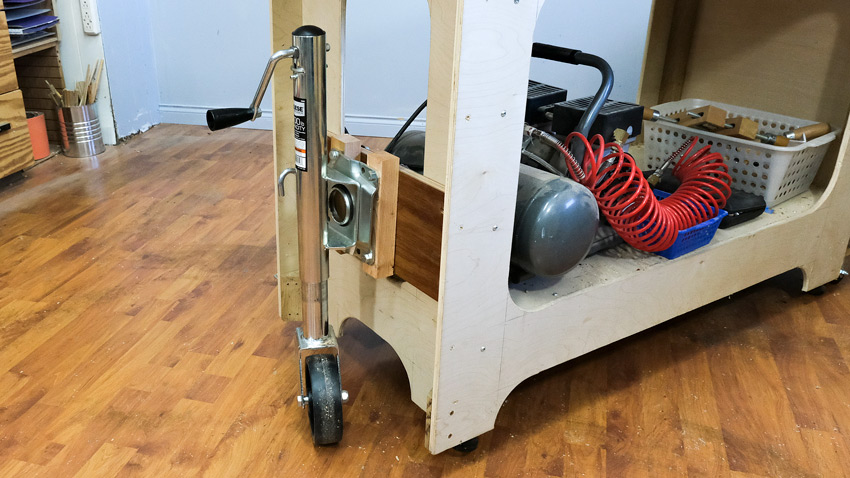 My first test of moving the workbench is where the "sway" showed up. It was late in the day when I did this test and decided to retire the project for the day and think about ways to reduce that sway. Sure enough, I came up with the idea of using stopper blocks to see if that would work and tested this by simply using the screws and it did make a huge difference as long as I made sure to get the wooden wheel support down on those supports.

Somewhere in my mind, I think there is still work to do on this, but I will live with what I have for now ... even though I am not 100% happy, it is still light years away from using those frustrating, crappy wheels I had on before so I guess that is progress ...