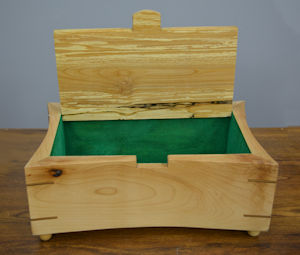 It's always fun making new things and seeing how they turn out, and if you get the chance to make something a second or third time, or even more, each version gets better and better because you learn quicker ways or building and you learn how to master the finer details too. I saw this little jewelry box somewhere and the design stuck in my brain as something I would like to build some day ... and someday has come.
I liked that it had substance, but also that it hand some curves to the design. It's not just a square, flat sided box, and it's nice to vary things once in a while. I started off with some rough sawn Alder and planed it down to 1-1/8". Since I had no plans, I just guessed at a size that I felt would look good.

The sides would be joined edge grain to edge grain, which is not the best way to hold wood together but by adding splines to the corners, the box would be very strong. The one thing I knew from making picture frames with 45 degree corners is that each of the opposite sides needs to be identical in length ... so the left and right sides need to be exactly the same length AFTER the 45 degree cut is made and the front and back sides also need to be identical in length. If they are not ....

... the 4 sides will never come together in a good fit. I could have cut the 45 degree sides on my sliding mitre but when it comes to accurate, fine tuned cutting, I always go back to my table saw for precision and consistent cuts. It's just what I have become accustomed to.

A dry fit confirmed that all the sides fit together perfectly, time to glue the sides together. I do not have a band clamp, and have never really had the need for one, so again I fall back to my blue masking tape which holds the sides together nicely for the gluing.

After gluing up the sides and waiting for them to dry, I cut the spline slots ... 2 in each corner. For this project I made some laminated splines from some veneer strips I had on hand. I was not sure if you would be able see the laminations but it was something I have always wanted to try. I glued the inside of each slot and glued up each spline and inserted them into the slots and left them until dry.  When dry, I used my bandsaw to cut the arches in each side after marking them out. The little box was really starting to take shape.

Next I needed to cut a rabbet in the bottom to accommodate a 1/8" plywood bottom. I did that on the router using my rabbeting bit. I could have pre-cut the rabbets on the table saw before assembly ... either way is fine. The finished rabbet, using the router,leaves rounded corners that need to be trimmed square with a chisel.

Before installing base, now is a good time to flip the box upside down and use the inside to draw around where the top needs to fit. This way you can get nice fitting top.

After attaching the box and adjusting any fitting for the top, now it's time to do the finishing and I my case I used Osmo on the outside and green flocking for the inside of the box, just to give the inside a bit of a softer look.

After all the finishes are dry, now is the time for final assembly and here is where I thought I had things well placed. Drilling the holes for the finishing nails that would allow the top to pivot, or hinge open I made sure that there was a slight gap in the back of the box. The gap, I reasoned, would be enough to allow the top to rest on the back of the box and stay upright so that someone get thing in or out of the box, but that didn't work ... quite. I made the pivot holes for the finishing nails about 5/16 from the inside back of the box. This is really not enough room to allow the lid to lift up and rest on the back. I discovered by trial and error that the pivot point for the top needs to be much further toward the front of the box and when this happens it allows the box lid to open fully and lie against the inside back of the box with ease. That distance will vary depending on the thickness of the lid, but with a 1/2" lid I seems that something more like 1/2" back from the inside back of the box is more appropriate, but you really need to make some test because there are different reasons why it could be a different distances according to the preferences of the builder.

Another point to consider. When I fit the lid it was a nice tight fit and I didn't think that the flocking would make any difference, but it does ... in two areas, it does affect the fitness of the lid, the second issue is that if you apply flocking right to the top, you can see it (although barely) when the lid is closed. A better option for the flocking would be to have it start about 1/2" or even 3/4" below the lip of the box. This will give the box a better fitting lid and allow for the lid to fit snugly and look clean which sharp corners and angles.

In the end I loved the design of the box. It's one of those projects that someone could use to build a business on, or at least to make a few for sale a local farmers market, craft sales and swap meets. A good way to earn a bit of extra money while allowing you to put the profits back into more lumber ... just a thought ....