Reciprocating saws or "recip saws" as they are commonly called, are not commonly regarded as woodworking tools but many woodworkers have and use them. Recip Saws are standard fare for home reno and DIY projects because they can be used to quickly remove parts of buildings, and with the correct blades, can easily cut through wood and nails so they are big time savers. The good thing with recip saws is that they all take standard blades. The blades can be inserted right side up, or upside down on most saws. Once the collar or collet as some call it, is twisted and the blade inserted they are locked in place. To remove the blades, twisting the collar will release the blade.
The one thing I have learned is that when it comes to recip saws, bigger is better. By that I mean that in many cases, the underpowered recip saws are just not capable of doing the work that many people expect from them. Whether you are looking at a corded or cordless tool, my recommendation is to purchase the most powerful one you can. I seldom give this kind of advice but for recip saws, I have never, ever heard anyone complain that the purchased a saw that was too powerful ... I have heard them complain that they should have purchased a more powerful tool.

Watch this and other similar videos on YouTube - https://youtu.be/gWajERepEdE

Like many tools that cut, the blades you select for the saw can make an enormous on how easily you can get the job done, and recip blades are no exception ....

There is a wide selection of blades for recip saws which also come with a wide selection of prices from very cheap to very expensive.  As a general rule, like with many things the more you pay the better the quality. This does not mean that inexpensive blades won't do a job for you, they may work fine they just don't last long, so if you have a big job to do, by time you purchase the number of blades you needed to do the job,  it could well be that if you had purchased one more expensive blade, it would be cheaper in the end.

There are generally 2 kinds of recip blades, blades for wood and blades for metal. Within these 2 groups there are variables like wood blades that will also cut through nails and screws for example.

Recip blades generally come in 3 levels, steel blades, bi-metal steel blades and carbide tipped blades. We call these good, better and best and the prices reflect who well they work.

Recip blades come in a variety of lengths from about 4 inches to 12 inches and of course the longer the blade the more expensive they are. When you are selecting saw blades, try and think about what the blade will be used for and purchase for that purpose. There is little use in purchasing a 12 inch steel cutting blade when all you are cutting is half inch reinforcing bar - nine inches of the blade, that you paid for, will never get used.

Cutting Wood
This is about the easiest test that any recip saw and blade can do. The difference between quality blades and cheaper blades for this kind of cutting is the number of cuts the blade will make and how quickly it will cut. Better quality, faster and much longer blade life.

Cutting Metal
This is a little more difficult cut, only because you do need to select a metal cutting blade. They are available in bi-metal and carbide tipped, the latter being easily the higher quality blade. Again the difference in blades is that the carbide tipped will cut somewhat quicker, but the blade live is much, much longer than bi-metal blades.
***** SPARKS **** One of the benefits of using metal cutting blades in recip saws is a major reduction in sparks compared to using and angle grinder with a steel cutting wheel. Creating sparks in the workshop is not the safest activity and any time I have had to use a cutting wheel I have always spent considerable extra time in the shop to ensure the sparks did no not create a fire somewhere in some dusty corner or crevice. With a recip metal cutting blade there is little or no sparks and it's much quicker to cut, all in all a faster, safer way to cut metal.

Cutting Wood with Nails Embedded
This is a very common scenario for home reno and DIY projects. To step this process up a couple of notches instead of just using construction grade nails, I used hardened steel masonry nails and you can see in the video how easily the Diablo blade sawed though both the wood and the nails. 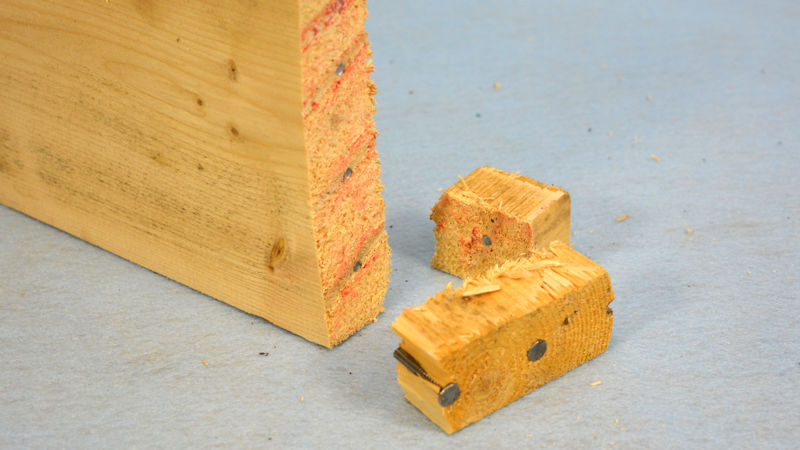 Cutting the Drill in Half
OK, this is not a conventional cut but I wanted to show just how tough the Diablo carbide tipped metal cutting blade really is. What I had not considered was that the motor inside, once the blade got that far in, would spin, making it harder to cut, but but tackling with a different angle, that blade still cut the drill in half. We all know that many of these drills have plastic housings but once inside the gearing is hardened steel which, by coincidence is exactly where the blade penetrated the drill and with a little bit of work, the drill was cut in half. 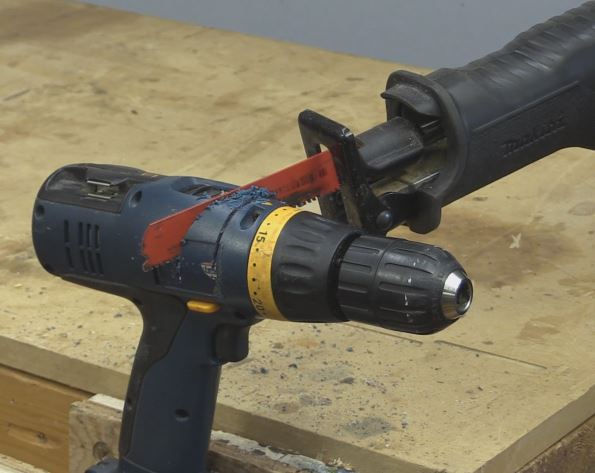 The best advice I can offer when purchasing recip blades, - when you don't know what to buy - purchase the best you can, carbide tipped if possible. You will pay more for them, but they will last far better than less expensive blades and I can tell you, I have never heard anyone say they were sorry they purchased the best quality recip blade, at least that way you have much better chance of getting your job done, quickly and efficiently ...