I always wanted to be a wealthy industrialist. I didn't know you had to serve time as an entrepreneur first. I didn't really understand what entrepreneurs did for a living but a lot of my friends were self-employed contractors and got to ski on work days so I took up carpentry and skied regularly. My idea of an entrepreneur always conjured up the picture of Captain Ahab standing at the prow of the good ship Pequod with a harpoon in his hand and the wind in his face.

Being a woodworker is tough, dirty, thankless work. Liberals hate us because we smell like bleeding trees and are largely responsible for global warming. As if contracting for a living isn't bad enough, one day I was forced into a project that could only be done with a BANDSAW. If you've ever been forced to use one, you know what I mean: the blade breaks every time you sneeze, it comes off if you "force" it, it won't cut straight, and God help you if you want to cut a full sheet of plywood with one; or a two hundred pound timber.

In my case it was a snakey rip cut through an 8 x 8 beam with no release cuts in sight. And I had to do it twice; without going off the line, even once! I had an old Delta 14" bandsaw with worn out tires buried under all the other unused shop junk in the corner. Choking on the concentrated evil of three years' shop dust accumulation, I dragged the cast iron, spider-infested anchor out in the light of day. It was immediately obvious that the saw was as unwieldy as the beam. How does one rip linked 3.5" semi-circles down the length of a 12' beam before one reaches retirement age?

Being already weak and old, I set about butchering the bronze age artifact down to manageable size in hopes of riding the saw rather than lugging the beam back and forth in a withering ballet of death on my shop floor, where the children would see me weeping. Lest the reader think I brought this on myself and that I should have simply skimped on the kids' porridge to buy one of the portable bandsaws already on the market, I refer to the picture showing the angle of crosscut as the semi-circles join. It takes a goodly throat and balance would be essential to maintain control and accuracy throughout such a long, imposing rip cut. 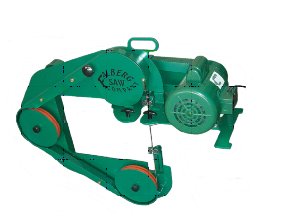 The two following months of intensive cobbling got me a weaponized version of the floor standing bandsaw that was just a wonder to behold. It weighed two hundred pounds and, with the help of a floor jack, I finally got it up on the beam. With one hand I held it teetering on the end of the beam while my other reached over to turn it on. I had only meant to go in an inch or two to steady it but ended up cutting the whole length of it before I could find a stopping point. When I looked back and saw what I had done, it was like a light went on. This was it! It's ALIVE! A balanced portable bandsaw with a slick upside-down table. Not believing what I saw, I quickly clamped the two pieces together and ran the second rip. It, too, was perfect! It's pretty exiting to realize that you've created a whole new tool with amazing capabilities and I immediately set out to write a provisional patent application.

A funny thing happens when you write a patent fresh on the heels of a successful experiment like that: you start thinking you're a god and can do anything. My head was reeling with new embellishments to the bandsaw involving lasers, gyroscopes, cold fusion, magnetic force fields, and double-edged blades. Really far out stuff! It doesn't hurt to go ahead and try the impossible; what the hell, you're already in Wonderland.

Thinking I'd be a millionaire just any minute now or at least as soon as the major tool companies saw this wonderment, I set out most bravely to produce portable aluminum bandsaws for the millions of timberframers who would flock to my door in the next few days. If you're wondering why I didn't just borrow $100,000 and hire a bunch of suits you must have missed the part about my being the inventor. American venture capitalists just don't invest in American manufacturing enterprises, (but I have had some interesting contacts from foreign corporations). Now that I think of it, I don't know if there ARE any American tool manufacturers anymore. That's scary, ain't it?

Anyway, it's three years later now, and I've had to abandon the gyroscopic stabilization system, the laser guidance, magnetic force field blade drive, and cold fusion power, but believe it or not , the double-edge blade guide works quite nicely and you all should be anxious to see that in production.

The patent is getting close to issuance and the saw business should soon grow to where I can afford that next big evolutionary advance. My only hold-up now is the procurement of the blades themselves, so anybody out there with more answers than excuses should call me at once. A double-edged blade is like a single-edged blade only it has two sets of saw teeth; it's not hard, it just hasn't been done yet. Think water jet or plasma or something. Why not spot weld two regular blades back to back; staggered end joint welds would probably result in a stronger blade over-all. You'd have twenty years of patent protection to recoup your development costs. How much could you lose that you haven't already lost on those tech stocks? Are ye a land lubber, or are ye an entrepreneur!

Operating my bandsaw is still a daunting task, it takes a fair amount of skill and finesse to drive that thin strip of blade metal through 18 inches of sometimes stubborn Doug fir but for those who master the technique, the rewards are incredible in terms of time, quality, and labor. Operation will be greatly simplified again when the double-edged blades come out; you'll get tighter radii, less sawdust compacting in your kerf, and backing up will be a snap.

Some would say you must have a massive cast-iron frame to make a proper band saw, but who wants a hernia from porting their portable? Unless you're running 1" blades, aluminum frames provide enough tension to break most blades in short order. Cast iron bandsaws are so rigid they need tensioning springs to prevent such breakage by taking up the slack of blade deflection. Others say you must have the power of a full blown horse stampede in order to cut thick wood when in fact Â½ HP is more than enough to snap the narrow blades you'd normally use in a contour cut (and isn't that what portable bandsaws are all about?) These and other misconceptions result from the term "bandsaw" being used to describe such a wide variety of specialized machines that have no more in common than that they use a band for a blade.

You reach a point in these specialized saws where proportions become defined by the size and scope of your machine's specific function. With stationary machines a given dimension can be anything as long as it exceeds the anticipated stresses. With hand-held tools weight becomes a critical design factor and under-building is as bad as over-building. Splitting that difference to find the optimal proportions for such machines therefore requires extensive field testing in as wide a range of applications as you can find. I've relied on my customers to guide me in this testing and their feedback takes form in every new generation of Falberg Saws. I haven't had any substantial complaints from the last dozen or so saws and I now think it is safe for the less adventurous woodworkers to join in the fun. You'll find the Falberg Saw useful for stacking and gang-cutting plywood and dimensional lumber in production environments: home made proprietary jigs have proved supremely efficient for repetitive log cuts: and of course timberframers have raised the bar for quality worksmanship within their craft.

"What about the pioneers?", you ask. With each new improvement of any significance I've called back the older saws for upgrades and rebuilds. The prototype frames all required an additional cross-brace to get more blade tension but other niceties like blade guides and lever-action tensioning have been added. I no longer use a tension spring at all as there is just enough spring inherent in the frame's mass to serve that function. I've also added lower blade guide extensions, TEFC motors, a stand, and some very sexy sheet metal origami.

I wouldn't want to discourage anyone from pursuing their industrial dreams but I will say that when I now think of the archetypical entrepreneur, my mind sees Gregory Peckory tied to a foul smelling Moby Dick by a bunch of fishing line with sinkers and harpoons and boat parts and a lot of blood all over while old Moby is giving him the Evil Eye and a defiant Ahab with his broken old harpoon is looking back with salt spray in his eyes as if to say "I've got you now!"

If you're really a serious woodworker, you'll go to http://www.falbergsaws.com and buy a portable bandsaw.