Shop Made Sander - That Really WORKS

"If you HATE SANDING, and all the dust that goes along with it as much as I do, this article will interest you. I think I have every "sander" ever conceived of just to try to cut down on my "sanding time". A few years ago at one of the Wood Shows, I happened to stop at a booth that was demonstrating what looked like a little home-made sanding device". It looked intriguing but I wondered how well it would work. On the trip home from the show a friend mentioned he had purchased one of those little "V" Drum Sander kits.

Hmmm ... I thought maybe there was something to those little sanders. A few weeks later I went over to his workshop to see how his little home-made sander was working ...

To read the full article , click "read more" below.

As it turns out he had finished building the little unit, but had not used it much. He told me that it seemed to be working OK, but that it took him a while to realize that the adjustment of the table height was critical and when this was done the sander seemed to work just fine. Since he didn't offer to demo the sander, I was somewhat skeptical about how well it worked and didn't give it any more thougth.

Skip forward to the next Wood Show ... yes I saw the same booth with the same demo. There were a group of people around watching the demo and a few of them bought some of the little "V" Drum Sander kits to make their own ... again I passed on buying one, though I continued to be intrigued. As luck would have it, a few months later while visiting another woodworking buddy, I noticed he had, what seemed like a fairly well used home-made sander tucked under his work bench. I asked him if it was one of the kits we had seen at the Wood Shows, which he confirmed it was ... and added that it was a great little tool that he used quite a bit. 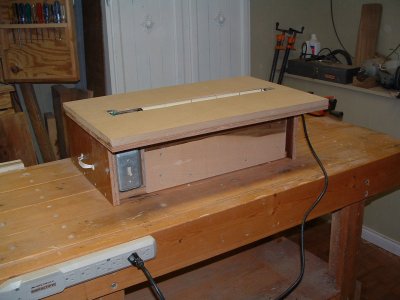 Fast forward to the NEXT Wood Show ... I finally broke down and bought one of these sanding machine kits. I purchased the 18" kit, which consists of a couple of steel pulleys, a link belt, 2 low-profile bearing blocks and of course the 18" drum. You have to supply a small quarter or half horse motor, and of course the wood to build the sander. My kit also contained two sets of instructions for constructing the sander, one a deluxe floor-standing version, the other a more modest portable model (shown in pictures), which is what I elected for my small shop. The plans are simple, one sheet of paper with a parts list and size on one side and a blow-apart diagram on the other. 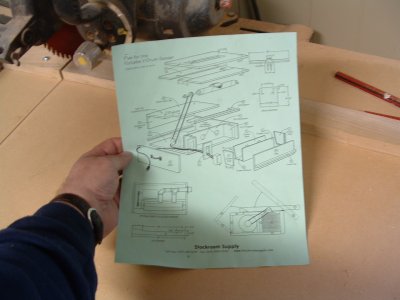 I cut out all the pieces as described in on the sheet of paper ... then had some fun trying to figure out which pieces connected to what. It's a bit like putting a jigsaw together but if you are in anyway mechanically minded, it's just takes a bit of time. In small type on the plans there is small phrase that states "adjust plan to size of drum". You may also need to adjust your wood thicknesses to fit the plan if you use other than what they recommend (which I did in a couple of instances).

Well, after a few days of off and on tweaking and adjusting, my sander was ready to go. I decided to heed all the information given to me by the manufacture and my friends who said ... the height adjustment of the top is critical to good results. What they meant by this is that the actual drum needs to be below the table when it is turned off because the centrifugal force of the sand paper on the drum will lift it just enough to sand your wood once the drum is spinning. 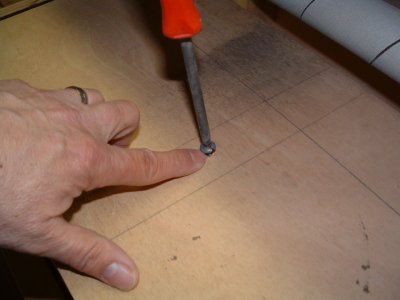 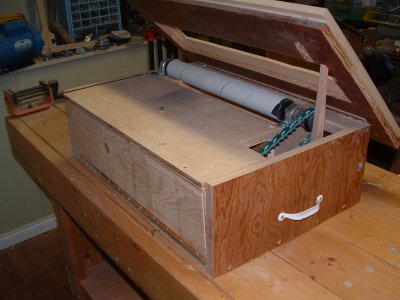 The sandpaper that attaches to the roller is a hook and loop type and comes in a variety of grits. I was surprised how easy it was to change grits. The first few times I tested the sander I found that I had over compensated and raised the table too much, and had to lower it a bit at a time. I even marked the head so I could see how much movement was required in raising and lowering the top. I was also astounded how quickly this little sander was working just as I had seen at the Wood Shows. One small hitch I ran into was that ... I found that somehow a one of my wooden support blocks seemed to be slightly lower than the other which meant that drum was sanding more on one side of the table than the other. (Actually I think the problem was that hinge was slighly higher on one end than the other) The fix for this was to simply raise one of the two bearing blocks by shimming it with bit of thin metal I had on hand. If you look closely to the image with lid up you can see the copper shims used to raise the roller bearings. 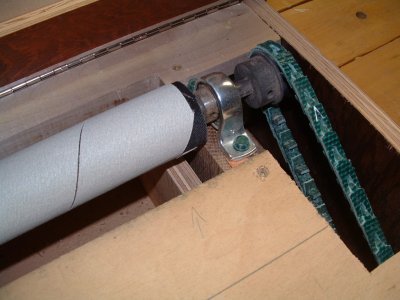 Once I had the blocks even with the top on each side, and adjusted the height of the table accordingly this little sanders works remarkably well. You can adjust how much wood to take off by the grit you use and how many passes over the drum you make. I still find I need a tiny bit of finishing sanding on some projects before finishing, but the bulk of my sanding is now done on my little portable home-made sander. And there is a bonus ... because of the design and materials used in drum, this sander is virtually dust free ... that's right, almost dust free. Most of the dust collects in the small drawer in the front for emptying later. If you really want you can connect you dust collector, but I hate the noise so opt to let the drawer collect most of the dust. 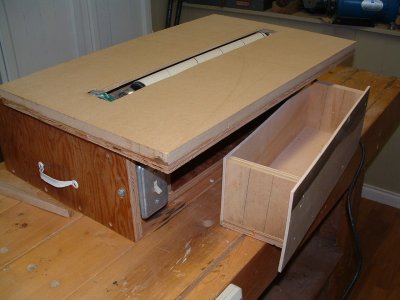 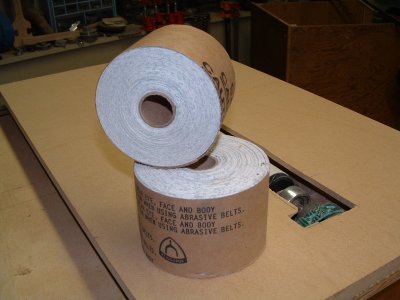 I purchased some rough-cut Broad Leaf Maple some time ago and found that much of it tends to tear in the planer, and that the only way to get dimensioned wood is to have it sanded to dimension. This little sander does a great job of doing that.

If you can't wait for the next woodshow to get sander that doesn't blow your years budget and works exceedingly well ... check out the manufactures website ... and tell Paul you read about it on Woodworkweb