"Make Your Own Tools" the article said. I love the idea woodworkers making their own tools, so I decided to make use of some plans in an old woodworking magazine, and make myself three nice marking tools that will leave a crisp fine line on wood I am marking for cutting. The article said it was easy, and I liked the idea of using hardened steel and my own woodworking skills to make some of my own tools. Of course the first thing to do is obtain the materials, so off I went to the "metal supply store" to purchase the steel material for the blades. I asked for a piece of steel, according to the instructions. The grumpy salesman then asked "what hardness do you need?". I was totally lost ... what hardness of steel did I need? the article didn't say anything about that.

I tried to explain what I needed the steel for, but both of us had lost patience with my lack of knowledge, it was time for me learn a bit about steel, and here's what I found ...

Back in the early 1920's (the exact date is a bit fuzzy) a metallurgist by the name of Stanley Rockwell (wow, what a great name), needed to devise some way of determining the hardness of ball bearings. As the story goes, his simple idea was to place a penetrating tip on the steel to be tested, and with careful measurement of pressure, see how far the tip penetrated into the steel. The depth of the dent left would determine the hardness of the steel.

Today we use the same idea, but in a more sophisticated tool with precise measuring accuracy. As a rule, most of the steel you find in woodworking tools, like chisel and plane blades are measured in the Rockwell "C" scale, hence th expression "Rc". The number that follows the Rc code is used to denote how deep the tip penetrated into the steel, the deeper the penetration, the lower the number and the softer the material, so an Rc90 would be harder than an Rc60 for example.
In real tests, today they use diamond indentors and apply a fixed amount of pressure to the diamond tip, then measure how far that diamond tip penetrates the steel. So with 150kg amount of weight, the diamond indentor might penetrate a piece of steel to a depth of .038" - this means that this particular piece of steel would have an Rc harndness amount of 28. By contrast, still using 150kg amount of weight on a harder piece of steel, the diamond indentor this time only penetrates the steel to a depth of .022" - in this case, this piece of steel would be recorded as having and Rc of 69. 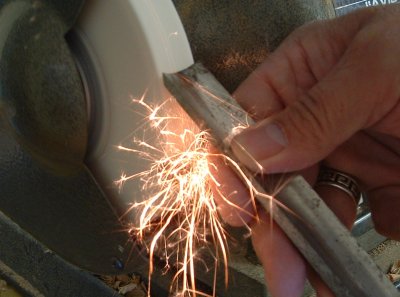 The reason there are so many different degrees of hardness is because different tools are required for different jobs. If steel is very hard it is more difficult to sharpen (often requiring special sharpening tools) and it is more brittle. For example a quality turning chisel like a Robert Sorby that are hit with a hammer will have a slightly different hardness than caving knives that are drawn by hand and sharpened frequently. If it is too soft, it won't hold an edge long, which means it needs re-sharpening often or it bends. Such is the case with a hammer. Carpenters expect to hammer nails all day without the hammer's head chipping away or bending. This is "balance" of creating the right hardness. There is also a trade-off in the flexibility of the steel. Softer steel will flex, hard steel will not, in fact if steel is too hard it chips, because it is brittle, which makes it even harder to sharpen.

Sawblades are a great example of combining various degrees of hardness. A saw blade might have a hardness of say Rc50 but the tungsten carbide tips might have a hardness of Rc90. This is so the blade can still flex somewhat (without breaking because it is too brittle) as it moves through the wood, but the tungsten carbide tips which do the actual cutting will last longer as they are harder than the steel. Freud Tools have made a real art out of combining different degrees of carbide to their different saw blades to achieve a wide range of saw blade uses. For example the carbide used in their Laminate/Melamine blades will be slightly  harder than the carbide used in their famous Glue Line Rip  woodworking blades because the  hardness and content of the laminate compared to wood is much different.  But there is also a limit to hardness as it compares with brittlenss.  Freud  actually use a slightly softer carbide in their metal cutting blades because a softer carbide is less brittle, which is what you need for cutting hard metals so all the teeth in the blade don't shatter. (Editors note: carbide is NOT metal, it is only used as a comarison element in this article because most woodworkers are familiar with both hardened steel and carbide) 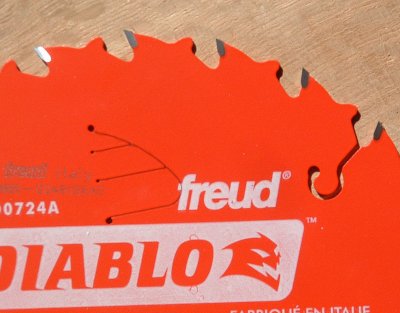 Most highspeed steel such as what you would find in bench chisels and woodturning chisels are around Rc60. This is because they hold a good edge, but are still reasonably easy to sharpen. Robert Sorby , arguably the finest manufacture of wood turning and carving chisels, is well aware of how important hardness is tool making. 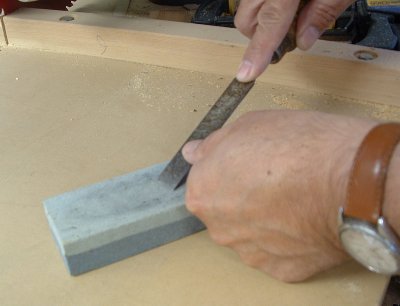 If you had a bench chisel with an Rc90, any time it fell off the bench onto the floor it would chip or fracture, then and you would have to send it somewhere to get sharpened because it is too hard for most conventional sharpening methods. The same thing that happens when you drop a carbide tipped router bit on the floor or bang a carbide tipped saw blade ... the carbide often chips. You now have a very expensive fishing weight, because ANY chipped carbide blade should NEVER be used in a power tool again ... at least if you value your eyesight, as flying pieces of carbide from a highspeed tool can cause serious (and often permanent) physical damage.

And so, back to my tool. I finally decided that the best hardness was that similar to a bench chisel where there would be some flex but that the maker blades would hold their edge longer, and that is exactly what I purchased. Now all I need to do is find the time to make them.