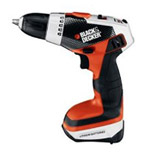 Black & Decker used to be one of the most respected brands for producing quality tools for the home handyman, which is a reputation that has slipped over the last few years although they have brought out some gems. That just might include the Black & Decker SC1400 Cordless 14.4v Lithium Ion Drill/Driver .

Having extensively used this drill for the past several months, it’s fair to say it’s received a few hard knocks along the way but for the most part, has done well for itself.

Fairly heavier than most other products currently on the market, we would hazard the battery’s capacity at somewhere around 1.5Amp hour mark since it hasn’t been included in the unit’s technical specifications. The battery should last you through a couple uses before you need to recharge it. There is one issue however with the battery in that it can’t be removed which makes it extremely difficult to replace and the only natural solution is to buy an entirely new product. This is a major weakness. It does come with its own charging dock however, much like an iPod which emits a red light during its operation. Unfortunately, you will have to depend on the battery level indicator located at the rear end of the drill, to see when it has been fully recharged.  When the small black button is held down, a set of green lights will indicate the status of the battery charge. 3 green lights means it’s on a full or nearly full charge and when it starts going down to 2, 1, etc it reflects on the battery life. This is a feature that we would respect having on other unity and because it’s a Li-Ion battery, it tends to last longer than most other regular batteries and can pull off about 90 minutes on a single charge.

The speed and direction of drilling can be controlled through a variable speed trigger and 3 a position slide, respectively. During use, we noticed that the trigger sometimes gets stuck during operation and Black & Decker have provided a solution via the central direction switch point which acts like a trigger lock. This doesn’t seem to have repaired much and we’ve found that an occasional silicone based spray around the trigger housing makes it easier to use.

The unit comes with adjustable clutch settings—six settings are available out of which one is for the drilling mode, and the remaining five for driving mode—which can be switched through the clutch setting ring behind the drill chuck. Six, compared to the 16 settings you’re allowed on most mainstream drillers is on the small side but when we dialled up one of the settings, we were able to ensure not overdriving screws. Having fewer settings just means less switching between the different settings to get the job right.

The chuck is a 10mm hardened plastic encased possessing a single action mechanism which means bits can be tightened and released with one hand turning in just the direction. While there is no ratcheting action like there is on higher end drills, it isn’t required either as long as you ensure that the drill bits are sharp, there’s no issue with the grip.

With its rubber grip wrapping, the handle is ergonomically intuitive with the trigger and direction slide switches easily accessible through thumb and forefinger. The drill as a whole is slightly heavy from the front which places more load on your wrist, so you won’t necessarily be able to hold onto it consistently, forcing you to pause a little in between operations. However, this tends to vary on whomever is operating it.

Over all, we weren’t quite sure what to expect with this product going in keeping in mind the varying reviews we’ve met with, but in general if you’re looking for a long battery life cordless drill, then you can’t really go wrong with the Black & Decker SC 1400 Cordless 14.4 Lithium Ion Driller. We would recommend it with caution for any homebased woodworker keeping in mind that it’s not perfect, but tends to keep up with the price paid for it. It’s great for drilling 1” diameter holes in pine studs using spade drill bits. It packs quite a bit of punch in its frame and comes with a drill, charger, 8 driving bits, 8 drilling bits all packed neatly in a plastic case with a 2 year warranty.