This is a low end fairly cheap 3 wheel bandsaw, so my rating takes that into account. In other words, the rating has a "for the price" (which is around $150) qualifier. When the bandsaw arrived, I just had to bolt the feet on, bolt the table on and then plug it and test it. There was a 1/4" blade preinstalled. But the speed control did not function properly.

After I turned it up to high it would not turn back down. I also had a bent knob screw. I contacted Grizzly and they sent replacements. The replacements had the same problems. I contacted them again and this time a technician called me and promised to hand inspect and test the parts before sending them. He did and they work fine.

If you need to use the saw for ripping stock, I have used TimberWolf blades in the saw and I would recommend getting a 3/8" 4 TPI PC blade with some caveats. The stiffer blades are harder to change. They do not warrant their blades at this length. You should use it only for ripping straight, which it does *much* better than the thinner blades that are recommended for the saw. Don't saw curves and don't back up any at all while the blade is in motion or you may break it. Use less tension than required for other blades. Run at about 1/2-2/3 speed. It will be much louder with the TW blade. You should put it on immediately before use and take it off immediately after use. With all those caveats, why do I recommend this? Because it will rip 4/4 stock ignoring drift 8/4 stock if you account for drift. And I mean rip it well; nice straight edges. 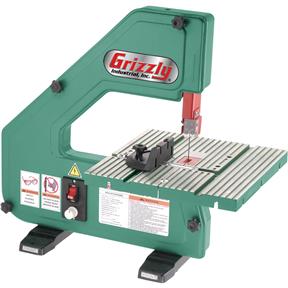 For general purpose blades, the best source I have found is Sears. They have a 1/8" 15TPI that is great for fine work on thin boards and a 3/8" 6 TPI that is good for most uses.

The dustport fits a 1.25" vacuum hose and is positioned perfectly. I get no noticable dust in the air and there is very little inside the machine when I clean it after use.

It runs fairly quietly. I use it in an attached garage while others are watching TV or sleeping a couple of rooms away.

I had been waiting a long time to purchase a replacement for my old Delta Rockwell lathe (student model). It had been a starter lathe that I had used for awhile as I learned to turn wood. It used a wrench to tighten the tailstock and tool rest and I had to change the belt by hand. As time went on and I grew in my ability I decided it was time to replace it. I wanted to do more. I had bought a 2nd lathe, a Jet mini-lathe , which I loved, but I still was confined in what I could do. After 14 yrs with the old Delta, it was time for a change.

I had my eye on a Powermatic lathe. It was very solid and quiet but I couldn't really afford the $3000. price. When Jet came out with their two new models, the 1442 and 1642 models, I finally found some affordable competition.

At first, the Jet 1442 was on my list. The headstock has a swivel head and the headstock can slide to allow the turner to turn larger objects by moving it to the end of the bed. It could change speeds with a manual lever that uses sheaves to change the speed. It was very quiet and could take up to a 14" bowl. It came with a 1hp motor. It sells for about $700.00 Delta's new lathe was very close in price and quality and in it's features. I felt the Jet was a little more polished but the Delta got higher marks in a recent review for vibration.

Then I saw the Jet 1642. It could take 16" large items. It's headstock can also slide to the end of the bed to work on much larger bowls like its younger brother, the 1442. However, the 1642 does not have a swivel headstock. Where the real difference lies is in the motor. The 1642 has either a 1.5 hp or 2hp with an electronic controlled speed feature. It also lets you reverse the direction which is very nice when you are sanding. Being able to slow the speed down to very low speeds and still have lots of torque, was WONDERFUL. I thought I had died and gone to heaven! I got the 1.5hp model (the 1.5 is a 115v, the 2hp is a 220v motor). The motor is superquiet. All you can hear is the sound of the fan in the motor. Both the 1442 and 1642 models have a bracket in the cast iron legs to allow a shelf for things like adding sand bags. (both models use the same stand with heavy cast iron legs) In spite of the heavy and quiet lathe, I did find a little vibration at certain speeds while I was turning some larger work. I bought 2 bags of sand and put in a shelf and voila', that was the end of my vibration.

The other difference between the 1442 and this 1642 model is the price. I mentioned the 1442 was about $700 or so; the 1642 was more like $1700 (after tax for me) Because I wanted this to be my last lathe, I decided to spend the extra amount. It is still almost half the price of the Powermatic and easily as quality a lathe. I can turn large and heavy bowls and the ability to slow down and speed up the lathe is something every turner should have, in my opinion.

Negatives? A few: 1. they include 1 faceplate, a massive 6" steel faceplate. It's great but how about including a second smaller one? They're cheap to make, why not include it. 2. The revolving live center included was also pretty cheap in quality, compared to the lathe. I thought they cut corners where they shouldn't have. 3. Because both the 1442 and 1642 offer the turner the ability to slide the headstock to the end of the lathe to work on large bowls, they should offer either a floor stand for the tool rest or and adapter for the tool rest to be mounted on the end. Again, even drilling holes in the support legs to allow it could have been added for very little cost. I could not find a seperate tool stand or option to allow for it. They could learn a little from Delta in this way.

I love my new lathe. It is high quality and sets the standard for price/quality in my opinion. Though they offer a 12" model for new turners. However, it is only about $100-150 more for the 1442 which is a much more substantial lathe. Anyone looking for a good quality lathe for not too much money can't go wrong with the 1442 or the 1642.

I was the first one to laugh many years ago when I heard that someone was introducing a small battery powered circular saw. I remember saying to the tool rep "so what will we cut with it, styrofoam? ... if it's not too thick". Well that first battery powered circular saw was not that bad and subsequent versions have been quite good. I still have not bought one but only because I don't have the need. For those who have purchased them, they couldn't live without them for doing the kinds of finishing and small jobs they were designed for. Move forward a few years ... and click below to read more

... And now we have a battery powered chain saw, and I have even had the opportunity to try one out. I happened to attend a "milling party" for our local woodworkers guild. We had two large trees to mill into rough cut lumber, a red cedar about 24 inches in diameter and a sequoia that was almost 3 feet in diameter (and only 23 years old).

As we started to position one of the ten foot lengths of sequoia on the milling saw, it became evident that it was going to be somewhat unstable due to a few smaller branches that had not been bucked off with the rest. Now it wasn't because we didn't have access to gas engine driven chain saws, we had both a Husquvarna and Stihl, both at the ready. But what should appear but one of our members with the Ryobi 18 volt cordless version. He handed it to me and said, "here try this out for those small jobs". Now I have to admit, after wrestling with crowbars and other logging tools all day, I wasn't looking forward to now trying to start gas driven chain saw to buck off a few small branches.

The Ryobi chainsaw was a dream. It's quiet, and surprisingly safe to use as the chain does not whip around the bar as it does on a gas driven saw. I was astounded at how easy it was to buck off a few fairly hefty branches. Keep in mind that this saw only has a ten inch bar, so you are not going to use to cut down major trees, but it is quick and easy to use for small jobs (like cutting 4x4, 2x6, 2x8 or even 2x10s) not to mention how handy it might be around the yard for keeping your own "orchard" in trim shape. So if you are looking for a less powerful alternative to your gas powered chainsaw, think about the Ryobi cordless, you may be pleasantly surprised.

Update: Since we did this review, we've received many emails asking about where to buy this Ryobi product ... it seems that this product has become rather hard to find, at least for online purchase. So, we did a bit more research and found some competing cordless chain saws that have been getting good reviews.