My recent project of building a banjo has made it necessary for me to learn the art of bending wood. I searched the Internet and my local woodworkers guild library for information. There were bits and pieces of what I needed to know and some suggestions on how to get started. One of my sources suggested using a NEW gas can on a Coleman stove. The idea being that a new gas can would not explode if it happened to run dry. An important consideration I thought.

After a mornings outing, I found that new Coleman stoves were going for around $70 which was a price I was not prepared to pay for this kind of an experiment. I snooped around a few garage sales on Saturday morning a found one only a few blocks from home. The stove looked in very good condition, hardly used I thought. "does it work?" I asked, the answer was affirmative, "how much?" I queried, the answer was ... a whopping four dollars. At that price I didn't have the heart to dicker on the price. 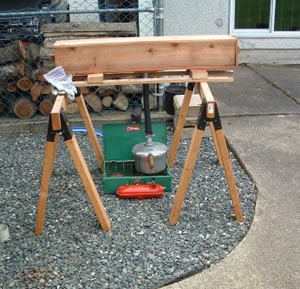 Finding a NEW gas can turned out to be a bit more problematic. I can't imagine how many places I visited, from hardware stores to department stores only to find stacks and stacks of gas cans, all plastic. I decided and alternative needed to be made so began by snooping around one of my local used-goods stores. I discovered an old pressure cooker for five dollars and decided it would be the substitute for the gas can.

After some rummaging around at the hardware store and the autoparts store I managed to come away with the bits and pieces of plumbing fixtures and radiator hose that would connect the steam box to the steam source.
I cut a hole in the top of the pressure cooker and fastened the pipe to the lid with a couple of large nuts. The pipe was sealed with automotive gasket sealer that comes in a tube. A Tee was installed in the cedar steam box and connected with radiator hose.
On the big day, everything connected together fine and with some minor adjustments on the sawhorses everything fit fine. I drilled a small hole in the cedar steam box, just large enough to accept the Latte' Thermometer so I could check the steam temperature.
After about 20 minutes the steam started pouring into the box, around the wood and out through the small pressure hole in the end of the steam box. After waiting 30 minutes for the wood to heat it was removed from the steam box and immediately into the jig for bending.

I discovered that it is important to bend the wood as quickly as possible as it cools of rapidly and within minutes is difficult if not impossible to bend and breakage of the wood becomes a very real risk (I know because I broke two pieces).
It's a fun project, fairly easy to do, but it does take some practice in order achieve consistent success.