The Magic of Glues

"Many, many years ago while I was having a small cavity filled in one of my teeth, my dentist told me that the material he was using was originally developed by NASA as a glue, but that it didn't work but had other redeeming qualities ... and now was used white dental cavity filler. Ever since that time I have had a fascination with glues. In the woodwork shop I use mostly white glues, which are more than suitable for most applications I do.

Recently I was involved in a special project with a friend that involved some tricky lamination and a LOT of different parts to be tacked together. I decided it was time to investigate what was available on the market these days in glues ... and here is what I found."

I had heard of two part glues but had no experience with them, so off to a local supplier I went. When I explained to the dealer what I was looking for he recommended a glue called "Fastcap". It comes if different consitencies, i.e. thin, medium and gel (I selected gel) and you need something called an accelerator or activator that makes the glue harden and cure almost instantly. This was exactly what we were looking for with our project. Before jumping right in an using it on the new project I decided to do try out this glue to see what it would be like to work with. The instructions were pretty simple ... apply a layer of glue on one surface, spray the activator on the surface you want to bond to ... put the two together for 15 seconds and the job is done. I also suggested that if there is any movement during the bonding the joint will be weakened. 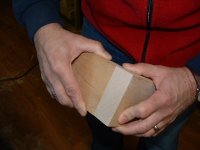 The first thing I tried were a couple of mixing sticks. I slathered some of th gel on one stick and sprayed the other with activator and held the two together for 15 seconds. After waiting a couple of minutes for the glue to cure I tried to break the sticks apart. What I found was that the glue bonding was stronger than the wooden sticks, I broke the sticks apart but only because the wood failed, not the glue.


Then I began to wonder just how strong this glue was. I cut a couple of chunks of 2x4s about six inches long. My plan was to glue them into a little pyramid then try to pull them apart. After coating one edge of the 2x4 then spraying the other with the activator I pressed the two sides together for 15 seconds. I let the two pieces site for a couple of minutes as I wondered what would be a better way to test the strength of the glue than to have me try and pull them apart. I decided a "standing test" would work, I put the pyramid on the floor and stood on the top of it with all my weight (almost 200 pounds) and the glue held. After the "standing test" I still wondered how strong the bond was. After much effort, grunting and excessive pulling I did get the two piece apart, but remember ... one side was edge grain, notorious for not being a "good gluing surface". 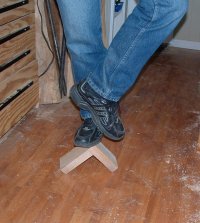 These test were more than enough to convince me that this "Fastcap" glue would do what we needed, and it did. Since that time I have talked with a couple of (kitchen) cabinet installers who use this glue instead of their air nailers when installing moldings around cabinets, they say it is quicker and less invasive.

What I haven't tried yet is how, or if the spray on activator affects raw wood in terms of applying different finishes and stains. I do not know if spraying activator on the wood will have any effect of different wood finishes if they are applied after the wood has been sprayed. My suggestion on that topic would be to cover any raw wood that needs to have a finish applied later and that way the problem is solved before it starts.

So ... I am now a big fan of  "Fastcap" and can see many instances where it too can let my compressor sit idle for a bit longer because using Fastcap is quick easy and I don't have to wait for the compressor to build up an tank full of air, only for me to drive half a dozen nails into something.