Background: The first attached image (1-Door-inspiration.jpg) is the inspiration for the design of some of my doors.  To be clear – I didn’t make this.  This is kind of what I’m shooting for.  I have a few variations I’m building.  The basic construction of the door involves a solid 1” core with ¼” thick panels glued to the core spaced ½” apart from each other.  Interesting details and tips in here, but are not relevant to this tip.  I constructed the core of my first door, milled 9” wide, ¼” thick African Mahogany panels perfectly and started gluing the first one ...

The second attach image (2-First-Door-rough.jpg) shows how this came out (unfinished). 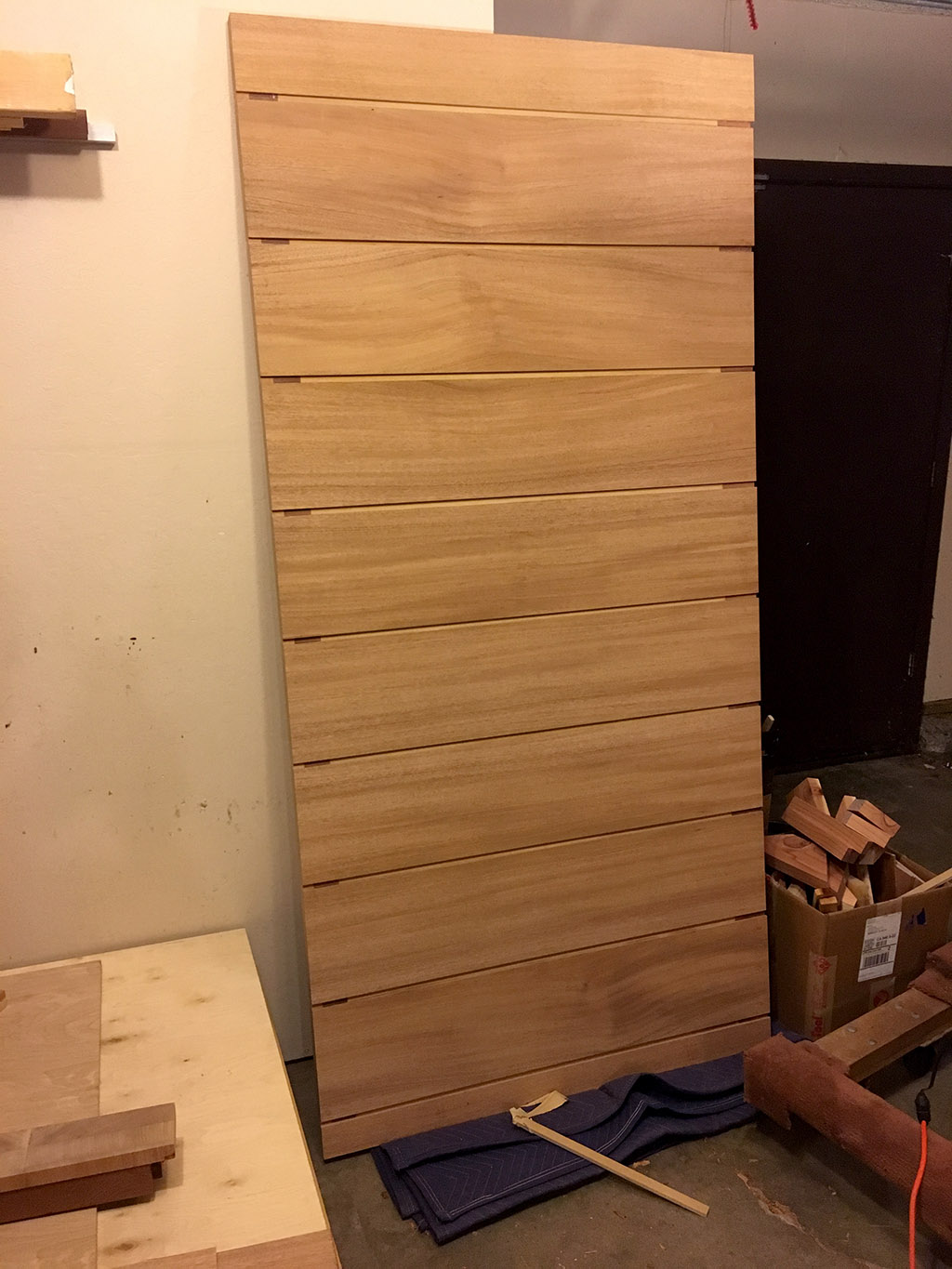 The problem: When I glued down a panel, it would warp like crazy.  The ¼” panel started out flat but by the time I spread the glue, lined it up and started clamping it down, the edges of the panel peeled away from the door with immense force.  I never got a picture of this in that state because I was panicking trying to find anything heavy it load on top of it and resolve it.  But I have a picture of something else than demonstrates the severity of the problem.  I made a mistake with one of my doors later on .. the details of why I’m doing this does not matter – but the fix involved gluing a small piece of African Mahogany to the door to thicken it and planing it down later.  I glued a piece way bigger than I needed, clamped it down and walked away.  I clamped it down less than 2” from its edge and didn’t worry about it because it was more than I needed.  In any case, I still didn’t expect it to warp this much.  See the 3rd attached (3-Warpage.jpg).  In any case, when gluing down large panels on my doors, it was difficult to place enough weight evenly along them to counter this force.  I had large buckets filled to the brim with water (about 50lbs each) and still not able to completely keep a panel pressed down flat. 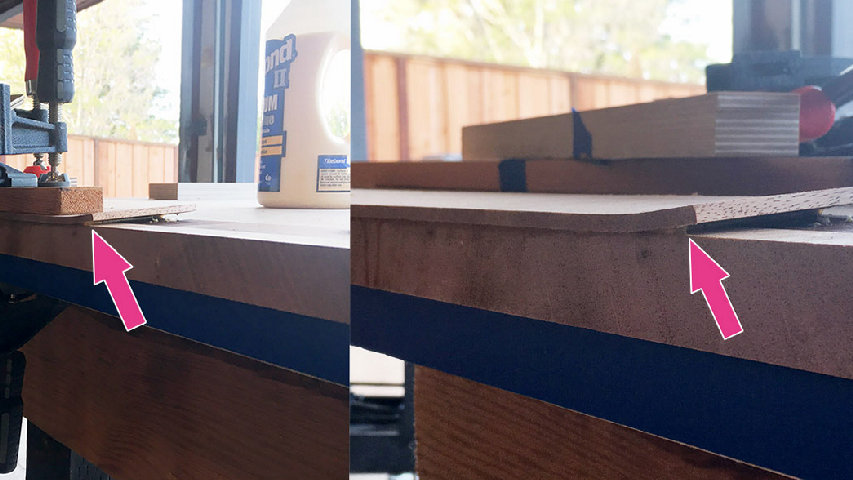 The solution: Ultimately, what is going on is that the liquid glue swells one side of the panel which selectively expands that side and thus warping the edges away from my glue surface.  The solution is to counter this by spraying the other side with water first.  So what I do is lay a panel out somewhere else and spray the top side with water and let it sit there while I spread the glue on the core of the door.  Water doesn’t seem to swell with as much force as the glue, but if it does swell a bit, the warping is in the other direction – concave to the glue surface as opposed to convex – which is favorable as the edges won’t peel up.  I place the wetted panel on the door core, line it up, clamp down the edges and place weight on it.  I still use a lot of weight to firmly press it down but I’m not fighting every inch of the edge as it doesn’t want to peel.

So this tip is more relevant to gluing thinner stock – I’d guess to say ¾” or less.  In these cases, spraying the other side with water will require less perfect clamping and achieve a better result.

This is what my first glue up looked like – 4th attached (4-First-Glue-Up.jpg).  I got way better at it over time of course. 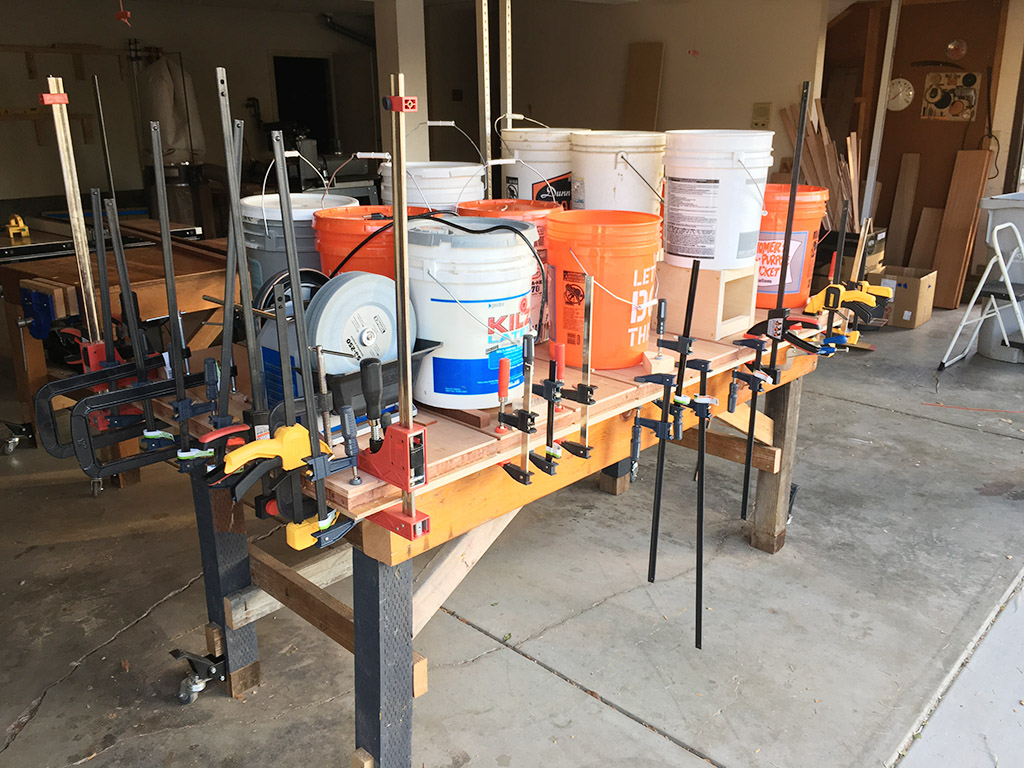