Amazing Woodwork Photographs From Around the World

Amazing Woodworking Photographs From Around the World

Wood isn't just enjoyable to work with; it also makes a great subject for photography.

Over the last few years we've seen some fascinating and amazing woodwork related photographs on Flickr. We've decided to share some of them below; hopefully you'll find them as interesting as we did. Read more: Amazing Woodwork Photographs From Around the World 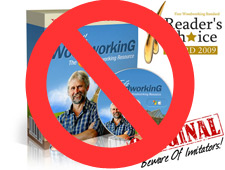 Joinery is the aesthetic mark of fine craftsmanship. Without strong, beautiful joints connecting two pieces of wood together, furniture, toys, and other crafts would be produced from single pieces of wood. Once the woodworking  joint types below have been fully understood and mastered, they can be applied to a multiple variety of projects, to make strong, attractively crafted material.

The most basic wood joint, this is used when framing walls in stick-frame homes with mechanical fasteners holding the two pieces of stock in place. Click here to learn more about how and when to build a basic butt joint.

Five Rules for Setting Up a School Woodshop Centre/Program

1. Remember to start with the easy and slowly move to the more difficult.  There are a variety of tools and equipment that can be purchase specifically designed for children.  The proper sized equipment is much safer for smaller hands and bodies.  For example: