Recently I received and email from this UK gentleman describing how he had watched one of my box making videos and was inspired to make his own boxes by modifying my design. He went on to say that he was 86 years old and was three quarters blind, but still managed to build the a box. He also went on to say how he had more recently taken up wood turning and it was at that point I wanted him to tell everyone his story ... he agreed, and the following is what he sent me. I hope you will enjoy it as much as I have ...
Hello all,
Colin has asked me to write a short piece for this site.  Site or sight, so there's a play on words,  so I'd better introduce myself as the Almost Blind Wood Maker. I am about 75% blind through a series of events that need not be detailed here. It is true that there are several totally blind wood makers and it was through a chap called Chris Fisher  (You can find him on YouTube under the name of The Blind Woodturner)  who gave me the push to redo wood making. I had been making all sorts of things over the years and had a decent workshop. At the time I was somewhat depressed as you can imagine ...

Initially I did loose my right eye in 1962 , OK I'm 86 now, but that had not stopped me doing what I wanted, my left eye was great. I never mollycoddled it,  but a few years ago I had a venial occlusion there which put me where I am today, that along with AMD. Dare I mention driving fast cars, flying aeroplanes, SCUBA diving, yachting  to mention a few, all with one good eye.
I already had a half decent workshop, I'd been making a host of things that were on the 'To do' list but which had come to a shuddering halt.  So I thought if he can do it, then so can I. So I tried making simple bowls, platters etc, things that were big enough for me to see if I got close enough.
About 4 years ago we, that is my wife and I were visiting her twin sister and family. This was something we do on an annual basis as they live in America and we live in the UK.  He is retired, as we all are, and is a woodmaker big style. They are all in their 60s so I am the Elderly Gent of the family.

One day I was standing by him at his lathe watching as best I could, what he was doing. He was making a pen. Now he has a Shopsmith lathe which is a big beast for such a small item, but it turned out well. As I was holding it , the pen that is, he challenged me to make one, under supervision I stress. He does this sort of thing..........
I backed off saying that I felt it was beyond me, but he persisted. At this point I should add that when I lost my right eye, my GP who was a friend as well came to see me and he told me that I must NEVER give in  and let this stop me from doing anything, because if I did it could become a crutch which would then be an excuse to just stop me from doing the possible. I might add that during WW2 he was with the Chindits behind Japanese lines and he too lost an eye from a bit of shrapnel during one of their more exciting moments, so he was the perfect example for me to follow. I did. But back to the tale. I did make the pen, albeit not perfect, but it takes time to get up to speed with anything new or difficult. That was a couple of visits ago and the last time we were there we got into making Valet Trays, which is now another  challenge for me to conquer. 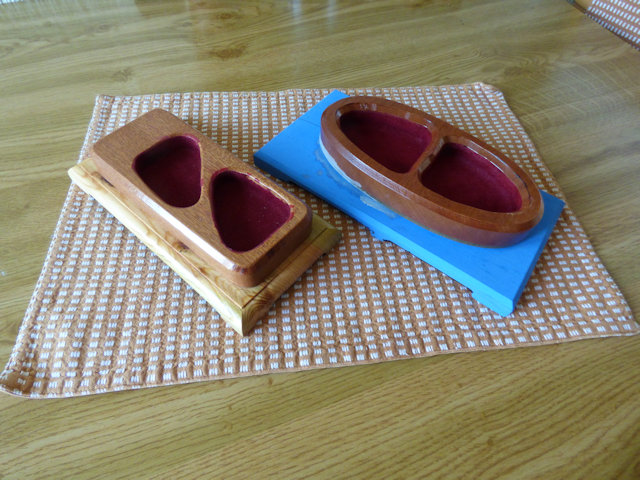 When we came back to the UK we thought it might be a good idea to make pens and other items to sell or try to sell at the various Craft Fairs. It is a sad fact that where we live there is no way we could sell pens at the full price that would include all the labour costs, All I hope for is to cover the materiel costs.  So I made about 50 over some time, and she started relearning how to crochet so that we would have a bigger selection for potential customers to choose from. One day, trawling through some YouTube videos I came across Colin showing how to make a box out of one piece of wood. This intrigued me so I tried. Not good at all, so must do better.  (Shades of my old school reports)  The next one did come out better.
Having been ''over here'' for 10 years  my wife decided that she had had enough of the UK winters, Where we live it is raw, wet and windy then , so ... Oh, here I must add that we were living in the USA at the time, and I had been looking online for possible properties,  2005 was a really good summer so I found a series of Webcams showing the desired local area. So when she came home from work I would call her and say,, Look at this, blue sky all the time and so on. It might be said by some uncharitable folks that it was a bit of a con, but only because after we came here the next year the weather has never been that good again, except once if memory serves. So we decided that it would be a good plan to become Snowbirds in Florida for the winters, This we did, so now I have the start of a workshop over there. 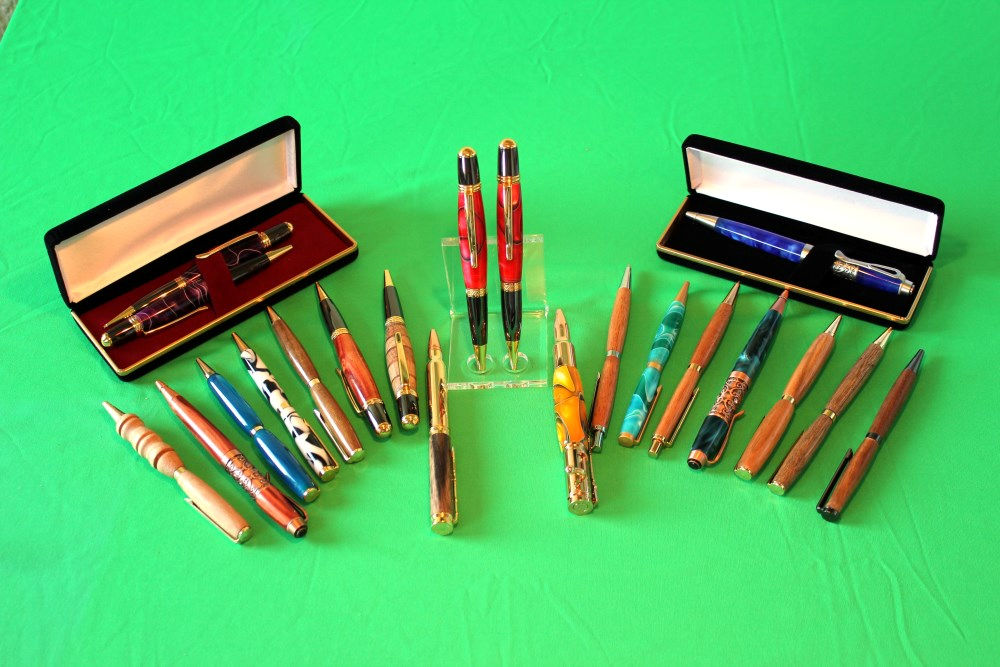 I have wandered off theme there but let's get back on track. I do remember the days when I was fully sighted and it was so easy to measure things and mark them accurately, but now there are an increasing number of 'talking tools'. I have a talking tape measure as an example. It is very accurate and can talk in either millimeters or Inches. Another item idea though silent I got from Colin by making a series of basic measuring sticks,. There is one available that is divided along a metal strip with grooves at many points.  And the list is increasing all the time.

The point I am trying to make is that a sight loss is NOT the end of everyting, but the start of a new chapter, just a change of pace.
I see that Colin has a very large number of subscribers who look at this site, so it is my ernest hope that any of you out there who know of someone who has a sight problem, whether they are wood makers or not and are tending to shrink away from 'doing things' might take some encouragement from this little article and find some satisfaction in doing things that they thought were impossible. 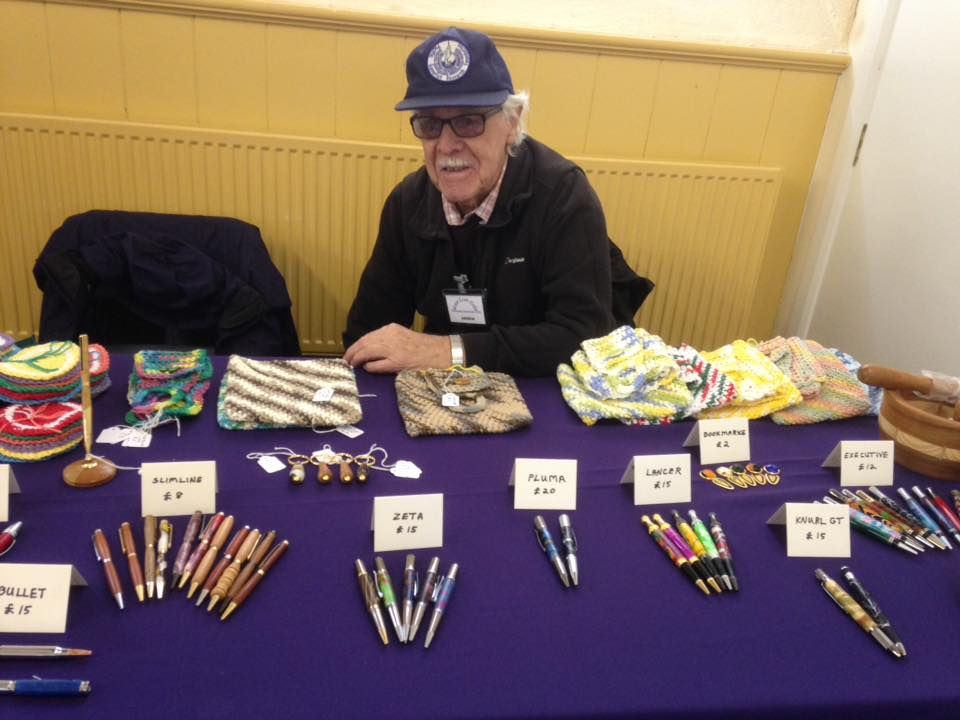 In conclusion of course it must be understood that how I try to overcome my sight problem is what suits me and must not be taken as the only and correct way to proceed. Every part sighted or blind person must figure out what is safe for them to do.
Best to all out there
Drew
Colin's note - visit Drew's Facebook Page here - https://www.facebook.com/turningmyway/