"The sticks are hand selected for the best walking stick characteristics, such as straightness, appearance, length, etc. The Yucca and Mesquite walking sticks are hand worked and finished, with the same processes. First is a sanding with 100 grit sandpaper. Next is 220, then 320, then 400, then 600, and the final sanding is done with 1500 grit super fine sandpaper.." 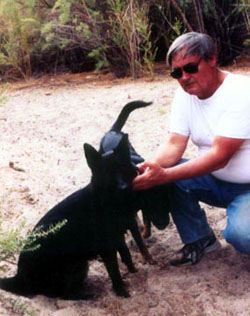 Bill Mesquite is a custom desert Southwest woodworker, who embellishes his works with the art of pyrography (woodburning). He does his preliminary designs on the computer and his "sounding board" are the two dogs that usually give solid support, when not chewing the mesquite sticks. Bill makes custom

Bill's professional career was in aerospace engineering and he did woodworking as a hobby. When he got lung cancer in 1998, he had a successful operation to remove part of his lung. During that time he thought about what he "really" wanted to do with the rest of his life, and the answer was "woodworking." Although he had fully equipped shops in the past, he opted for working mainly with hand tools.

He started working with mesquite in the desert because it was readily available, then expanded to Yucca, Sotol, and other woods. Bill expanded his interests to woodburning and then into making custom woodburnings and products that folks wanted designed. Bill says, "I really love what I do and it shows in what I make and the emails I get praising my work." A look at his main site shows many great testimonials about his work.

His walking sticks are made according to the following criteria :

"The sticks are hand selected for the best walking stick characteristics, such as straightness, appearance, length, etc. The Yucca and Mesquite walking sticks are hand worked and finished, with the same processes. First is a sanding with 100 grit sandpaper. Next is 220, then 320, then 400, then 600, and the final sanding is done with 1500 grit super fine sandpaper. Next is the woodburning of the images. After the woodburning, an application of tung oil is liberally put onto the sticks. The next day it is sanded again and another coat of tung oil is applied. Same thing for the third day. Then a coat of wax is applied using our unique "desert sun" process. It is then buffed to a polished sheen for durability. The next day the leather grips are wound and applied wet to the top of the stick. It dries for a day and then the stick is ready for shipment."

He is eager to discuss the customer's needs and, unlike most walking sticks, his are of high quality and a great value. They are great items to be cherished as collectibles, and to be passed down as meaningful heirlooms. 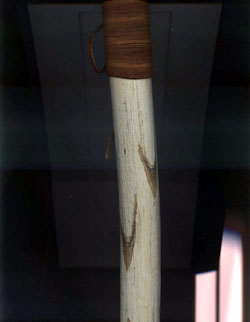 Bill's handcrafted talking sticks are unique Southwestern creations. He describes them as follows:

"What is a talking stick? The talking stick, which can be used as a prayer stick, was used by the Native Americans to manage the conversation in formal and informal meetings. The leader of the meeting, say the Chief, would hold the stick and begin talking. The idea was that no one could talk, unless they held the stick. When he was finished with what he had to say it was passed to the next person, either to his right/left or by rank. That person could then speak as the others had to remain silent. Speakers generally didn't speak longer than necessary, for fear of upsetting the spirits in the stick. Sometimes members would bring their own talking sticks. The talking stick is a wood stick about a foot long, decorated with symbolic items of nature that have meaning to the owner. Some tribes believe that

the animal selected the person and not that the person selects the animal. Some tribes also believe that the name of the child, when it is born, is based on the first thing the baby actually sees. Hence the wide variation in sacred animals. The decorations can be feathers, images, leather, beads, fur, bone, shells, etc. Some folks would put the talking stick out in the full moon light to allow the spirits to enter. Regardless the yucca/sotol wood was once a physical living thing and is now a spiritual tool used for many spiritual reasons.

Today the talking sticks can be used as intended and also make a nice wall decoration and conversation piece. Some people also use it as a prayer stick and give them to folks who are ill or recovering from an illness as a "get well" gift.. It may not be a bad way to teach kids to listen, by using it.

The hand crafted talking sticks that I make are from the Spiritual Yucca or Sotol wood and use decorations as they originally were, however I also woodburn images into the talking stick of a spiritual or petroglyphic nature. Kokopelli is a favorite image to have woodburned into a "lucky" talking stick." 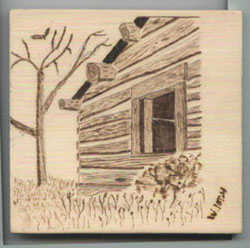 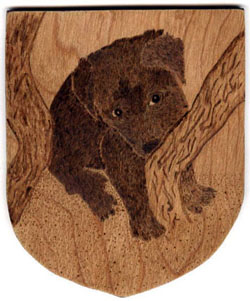