Bruce Campbell lives and works in Coquitlam, BC.  He began woodturning in 1979 and spent about 15 years learning the technical aspects of the craft. Today, turning has grown from his hobby to his profession. He approaches his art by first learning and practicing physical techniques and then working to understand how those techniques are applied to classical designs.  Once he has confidence with a the formal design he looks for ways to alter or combine it to create new and interesting  pieces.

His work includes gallery items (bowls, boxes, vessels and sculptures), craft items that are available through shops and fairs and architectural work such as furniture parts, staircase spindles, etc.

Bruce's current interest is merging media.  He uses paint, pyrography and texturing to enhance pieces and is combining precious metals and clay into his finished works.  He also enjoys demonstrating, teaching new turners, and mentoring those who wish to improve their skills.

When I was growing up my father had a shop in the house.  As a result, I was always around tools.Â  Looking back I realize that it was a pretty basic shop but it was enough to give me a love for working with my hands.

By happy accident (rather than good planning) I went to university  after high school rather than becoming a tradesman.  Yet even when I was buried in books and classes, then later in a career in the computer business I still had a shop in my home and woodworking was one of my hobbies.

I n 1979 I purchased an old house in Calgary, Alberta and decided to demolish the very tired garage. First, however,  I had to clean out the junk. One of the "treasures" under the floorboards was an old lathe.  It was made of two U-beams designed to bolt to a 2x10 with a set of pillow block bearings on a block of metal for a headstock, a face plate and a #1 Morse Taper on the tailstock with a dead-center.  It had perhaps an 8" swing and a 36" bed. 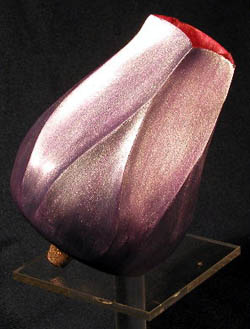 I took that old lathe into my shop, built a stand for it, bought a pair of stepped pulleys and a second-hand washing machine motor and after a little fiddling I had my first lathe.  I think the only thing that saved me was that the motor was only about 1/3HP and the belt was not very tight.  Like many others I tried using my wood chisels first (with predictable results), looked at a few books, bought a $25 set of six tools at the local hardware store - and had a blast.

I moved to the US a year later and left that old lathe with a family friend.Â  When I returned to Canada I got a "real" lathe for Christmas.  Angle iron ways, 12" swing, 1"x8 spindle, live center!  Wow!  It was still fun and I proudly pressed gifts on family and friends which  I still get to see from time to time - a mixed blessing at best.

I outgrew that lathe and bought a mechanical variable speed next.  Once again, my turning improved and I could tackle more elaborate projects.

My real awakening happened in 1997 when I took a 5-day intensive seminar with Mr. Richard Raffin.  I found everything that is said about Mr. Raffin to be true.  He is a quiet man with strong opinions, a fabulous turner and a wonderful teacher. My 15 years of fiddling around prepared me for his careful and precise teachings and it felt like someone switched on a light in a dark room.  Things that used to take hours took minutes and things that seemed impossible were conceivable even if they were not yet "easy". 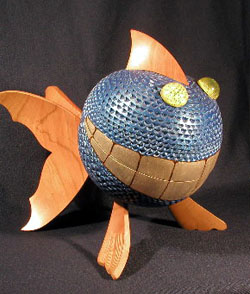 Within a year of that seminar, even after spending a bunch of time building a large heavy base, I had outgrown my third lathe and  needed to upgrade.

I looked at lots of lathes and finally purchased a Oneway 2436 with a few add-ons.  Buying a "big" lathe certainly was a huge step toward improving my turning and now I can tackle most anything I choose.  I am also pleased that my old lathe lives on in the shop of one of my young friends.

The next major development in my turning was hooking up with a group of people who wanted to form a woodturning group.  Six of us became the "founding" members of what is now The Greater Vancouver Woodturners Guild (AAW Chapter 130) (see www.gvwg.ca ).  We had 70 people at our first meeting and the club grew to over 100 within 18 months. 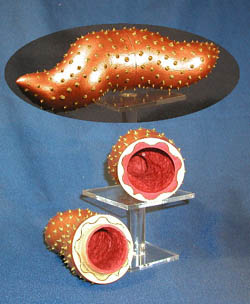 Being surrounded by so many people interested in turning spurred me on to do even more learning and turning.Â  Moreover, the club began inviting top-notch turners from all over the world to visit and teach. As a result I have attended demonstrations and had hands-on classes with Bonnie Klein, Clay Foster, Stuart Batty, Ernie Newman, Michael Hosaluk, Don Derry, Jack DeVos, Mike Mahoney, Dale Larson, Phil Brennon and others. Each time I watch another turner or take a class I learn something more.

In 1999 I also began to demonstrate and teach for at a local tool company that has been a long-time supporter of wood turning. Since I have taught and demonstrated for a number of groups in the Pacific Northwest and I continue to get a kick out of it each and every time.

In 2002 my career took another "turn" when I was caught in the nation-wide trend for large companies to downsize.  I was suddenly given the choice of looking for new work or turning my hobby into my job.  Taking a line from Confucius - "find something you love and never work another day in your life" - I decided to  pursue my wood turning full time.

Turning for a living certainly adds a new dimension to the Art but I still love getting in the shop every day and I still learn something with every project.  With good luck that will continue and I will turn for many years to come

You can see more examples of Bruce's work at www.artisansworkbench.com