Sometimes the best deals in tools can be made by looking to the past. In the decade when "sliding compound" and "chop" saws are the norm, why would anyone even want to consider a Radial Arm Saw ? I must admit I haven't had much to do with Radial Arm Saws for years, and like many others, had purchased a sliding compound saw. I never was in love with the sliding compound. I found it a bit light-weight and ... well, a bit finictity to use, if you know what I mean.

Recently I inherited at barely operational Radial Arm Saw . It hadn't been used in years and needed a real big clean-up. I decided rather than throw it out, I would re-build this saw from the past and try putting it to work. Lucky for me the motor worked, and pretty much everything else on the saw except the power switch, which was the first repair. All saws movements were either seized or very stiff ... so after a few hours of dis-assemble and re-assembly with bit of new grease and oil ... everything worked like new again.

One of the problems with these ole Radial Arm Saws is that they can be more dangerous than some other saws. Most of the reason for this is because they seldom are fitted with the right blade, which makes all the difference to this saw .... click below to read more

Often these saws came from the manufacturer with horrible old combination blades with teeth in them that looked like they could rip through two inches of solid steel. These old blades are part of the "safety" problem with Radial Arm Saws. If you have one of these blades, I suggest you make an nice shop clock from it or send it to metal scrap, do not use these blades on anything, unless you are cutting fire wood. Their cut is rough and they are far too aggressive for most woodworking applications. 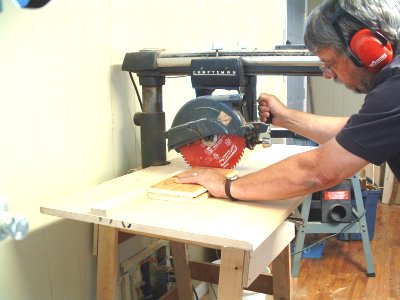 I have found the one of the best blades is the 72 tooth Freud Sliding Coupound cross cut blade , and if you want to add another element of safety, you could pick up the one with the anti-kickback teeth. These 72 tooth blades give excellent cuts and are far less dangerous and aggressive than the old "combo blades" that came with these saws. This particular blade was designed for chop and sliding chop saws and is manufactured with a NEGATIVE tooth hook angle. This means that the blade is biting more into the wood surface and using the table for resistance than postive hook angle teeth that would be biting into the back of the wood being cut where the resistance is more the person holding the wood (and subsequently more dangerous).

Most of the Radial Arm Saws are pretty easy to figure out, even if you have never operated one before. They also do some hand things that a Sliding Compound could never do, like rip wood or use a Dado blade in for certain applications. I particularly like the ease with which 45 degree cuts can be made, and they are accurate, at least on my saw they are ... which is more that I could say for the sliding compound which could never seem to make a decent 45 degree cut. 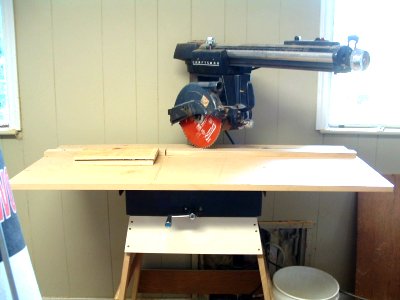 The disadvantage of these saw is that they are not portable ... at all, despite that in the past they were used on construction sites and were even advertised as construction site saws, these things are big and heavy, and I would venture a guess to say if saw safety were an issue, moving these saws is far more dangerous than actually operating them.

In terms of saw guards and saw dust collection, Radial Arms Saws also have draw backs. The dust collection, although not usually a big issue with cross cutting, is often not well handled by most of these saws although many do at least come with at shute to attach a hose to. These saw never did experience good quality saw guards. That is one area the more recent Sliding Compound and Chop saws have it over the old Radial Arm Saws. But - With careful and deliberate operation and the proper blades these old gems from the past can still be very useful tools.

If you really want to dress up your saw and make VERY usefull, adding a Flip Top fence stop is a HUGE time saver. I have discovered that after a few weeks of use I have fallen back in love with this "vintage saw". I like how sturdy and secure it feels and how it handles cutting. The tool is far more versatile than any Sliding Compound, and the best part is ... you can pick up these tools right now for next to nothing. Just check out your local auction, newspaper or classified ad section. Compared to the price of a decent Sliding Compound, and "vintage" Radial Arm Saw, with a bit of TLC and new Freud blade might just the thing you are looking for!